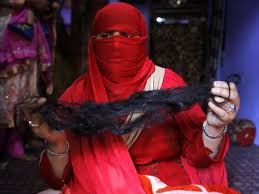 The braid chopping phenomenon in the Kashmir valley has attained a critical dimension. With more than 150 incidents having taken place in the last month (from September 14 onwards) there is panic among the people there.

The tension has been heightened by the irrational violent reaction of vigilante groups who have attempted to brutally kill two innocent youth in the last few days on suspicion of their being braid choppers. One of the victims was mentally challenged, and yet, the mob attempted to burn him alive. It was only the timely intervention of the Police that saved the boys.

Earlier, a mob thrashed an army soldier on a similar suspicion of being a braid chopper. The Army personnel were forced to fire at the crowd in order to control the escalating mob violence; fortunately there were no fatal casualties even as two civilians sustained injuries.

Senior officers of the security forces have already admitted that the braid chopping incidents have negatively impacted the pace and momentum of the counter-terrorist operations, something that is totally undesirable so far as the thrust to usher lasting peace in the Kashmir Valley is concerned. . “It is a huge disadvantage for us. Our resources and manpower are now focused on handling these cases,” said Kashmir’s Inspector General of Police Munir Ahmad Khan while speaking on the subject.

There are many in Kashmir who would love to exploit braid chopping incidents to alienate the masses from the security forces. Planting of rumours about the involvement of army and other security forces personnel is definitely a possibility.

Earlier, braid chopping caused a crisis in Delhi and Haryana. Strangely, the incidents over there ceased as abruptly as they surfaced only to remerge in Jammu and Kashmir, especially Kashmir. This also gives an impression that the fear that braid chopping caused in Delhi/Haryana could have given an idea to evil foreign forces to replicate the same in Kashmir to create a turmoil over there.

Always known to be emotionally charged the Kashmiris’ are reacting to the problem in their typically hyper-sensitive manner; accusations are flying all over with the government and the Police coming under fire by one and all, processions are being taken out with ladies in the forefront and now we have the vigilantes attempting to taking law in their own hands.

Vigilantes emerged in Delhi and Haryana too but the reaction did not take a violent turn as is being seen in Kashmir. Hyper-sensitivity, latent mistrust in the government and proclivity to take law into own hands are major causes behind the incidents not dying down.

The separatists and anti-national elements, who never leave any opportunity to cause instability in the valley, are naturally very busy stoking fires over the braid chopping incidents. While calling for protests and lock outs they have no compunction in blaming the security forces for the attacks.

Nahida Nasreen, general secretary and spokesperson of the all woman radical organisation Dukhtaran-e-Millat (DEM) has gone to the extent of terming braid chopping as a “ploy of India” to continue the so-called occupation of Kashmir. She has called the police an enemy of the people and openly urged the people to not cooperate with investigating teams.

Even a mature political leader like GA Mir, President of the J&K Pradesh Congress Committee, has gone on record to say that the incumbent government is “responsible for such incidents” and they constitute a “Government sponsored design.”

It is very sad to see such political brinkmanship at a time when all elements inclusive of the civil society, political constituents, common people, police and security forces should be joining hands to overcome the problem.

When elders should be providing solace to the victims and ensuring that the situation does not escalate, they are immersed in a redundant exercise of gaining political brownie points. The attempted killing of two innocent youth and thrashing of some security personnel/women can be considered to be the result of incitement from various sources.

Chief Minister Mehbooba Mufti has, very rightly, described the protests and associated actions as an attempt to create mass hysteria and has assured that the government will take steps to “find the motive behind the braid chopping attacks.” Her statement implies that there is more to these incidents than meets the eye and they could well be a part of a well laid out plan of the enemy to destabilise the region.

The police, in the meantime, is in overdrive to get to the bottom of the problem. The award for credible information about the braid chopping incidents has been increased from Rs. 3 lakh to Rs. 6 lakh. Special teams have been instituted, joint patrolling along with locals is being done and helpline numbers are in place.People inciting distrust and violence have been identified and arrested. The police, however, has gone on record to say that support by either the victim or the family members for furthering the investigation is not forthcoming. A specific appeal for cooperation has been issued. It is here that the community leaders should come forward to assist the government.

Braid chopping is not stopping in Kashmir due to an all pervasive fear, media attention and “conspiracy theories.” It has become a tool in the hands of inimical forces to destabilise the region. Community leaders need to come forward and play a big role in meeting the challenge.