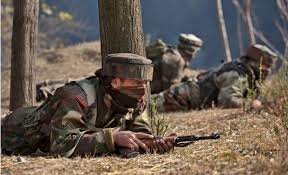 Two brave soldiers of the Indian Army, hailing from the Kashmir valley, made the supreme sacrifice in service of the Nation on November, 03. They were killed due to unprovoked fire by Pakistani troops from across the line of control in the Gurez sector.

The soldiers, Rifleman Tariq Ahmed Lone, resident of Baktoor, Gurez and Rifleman Waseem Ahmad Lone resident of Bandipora were serving with 160 Battalion (Territorial Army).They were killed while patrolling the forward areas in the Gurez sector  where there was indication of infiltration attempts by some Pakistani terrorist groups.

The visibly upset troops if 3 Sikh and 13 Sikh, with whom these brave soldiers were attached, gave a befitting response to Pakistan with heavy retaliatory fire.

The bodies of the soldiers were handed over to their families with full military honours. The Corps Commander of the Chinar Corps, Lt General SK Dua, paid tribute to the bravery and devotion to duty of the fallen soldiers. The units with which the soldiers had operating were full of praise for their heroism, while guarding the borders of their country in very treacherous terrain and difficult conditions.

While reflecting on the death of two honest and brave Kashmiri soldiers due to Pakistani fire, one wonders as to why the human rights organisations, that are otherwise so active in the valley, have not raised any voice of concern at this wanton killing. These organisations do not lose any opportunity to malign the Indian army with accusations of human rights violations; now, when Pakistan has brutally killed two Kashmiri soldiers, whose only fault was that they joined the army to serve their nation, there is a deafening silence from these organisations.

One cannot help but feel that they apply different rules for different people and their agendas are based on well established vested interests.

The manner in which the Kashmir media covered this martyrdom of Rifleman Tariq Ahmed Lone and Rifleman Waseem Ahmad Lone was also quite disappointing. Here were two local heroes who had laid down their lives while guarding their own people and the local media chose to ignore the great sacrifice. Most of the Kashmir based newspapers carried terse two paragraph news stories on the incident and no more.

These very newspapers give voluminous space to the killing of terrorists as was seen just a few days back when Abu Qasim, a foreign terrorist of the Lashkar-e-Toiba  (LeT), was killed. Abu Qasim was a criminal and a sadistic killer who had the blood of many innocent Kashmiri civilians on his hands. Despite his criminality, he was glorified by the Kashmir media.

Some vested interests collected a large crowd for his funeral which was religiously reported by all Kashmir based newspapers.

Undoubtedly, there is a media set up in the Kashmir valley that caters to the secessionist and divisive forces. Why this segment has been allowed to continue with its nefarious activities is something that defies logic. The state government  should put a lid on this perfidious activity and the sooner it is done the better.

The dastardly killing should also have caused concern of the international community since it exposed the continued violence that Pakistan is perpetrating along the line of control. Here is a case where Indian soldiers of Kashmiri origin were peacefully patrolling their territory and they ended up losing their lives due to Pakistani gunfire from across the line of control. Only recently, PM Sharif had given a commitment to reduce violent engagement with India, and this is how the army of his country has responded to his promise.

Pakistani leaders make promises on Kashmir that are meant to be broken. It is now up to the international community to call the bluff. In his next meeting with the Prime Minister of Pakistan, the President of the United States should seek to know the concrete steps taken to make good the promises made.

Rifleman Tariq Ahmed Lone and Rifleman Waseem Ahmad Lone were serving with 160 Battalion (Territorial Army). Recruitment for TA (H&H) has been done from a large array of terrorist infested districts to include Baramulla, Kupwara and Jammu. Minimum education level is eight standard and age limit is 25 years and below. Ex-servicemen, Ex-STF/SPO and surrendered militants are also enrolled in TA (H&H).

The response for this recruitment has been overwhelming and the performance of the soldiers is much beyond expectations. The loyalty and dedication of the TA (H&H) soldiers provides a role model for the security forces in the state.

The bravery exhibited by Rifleman Tariq Ahmed Lone and Rifleman Waseem Ahmad Lone is reflective of the ethos and dedication in the TA (H&H) Battalions in Kashmir. They were attached with units deployed on the line of control and, in view of their detailed knowledge of the terrain, they were assisting the troops in identifying the possible infiltration routes that the terrorists would follow. Possibly, they had taken the patrol very close to an area from where infiltration was to be attempted, which provoked fire from the Pakistanis in which their lost their lives.

Divisive forces and terrorists organisations operating in the valley are quite worried since erstwhile recruitment areas of terrorists are now providing soldiers for TA (H&H) battalions. TA (H&H) battalions in Jammu and Kashmir are playing an important role in Counter terrorist operations in the state.

By making the supreme sacrifice, Rifleman Tariq Ahmed Lone and Rifleman Waseem Ahmad Lone have done their nation, the Indian army and their families proud. The fact that some fringe elements have not acknowledged their greatness pales in front of the honour and accolades that the rest of the nation has bestowed upon them. Appropriate action definitely needs to be initiated against all such anti-national elements who are causing impediments in the peace process. It has to be ensured that the sacrifice of these two brave soldiers does not go in vain.