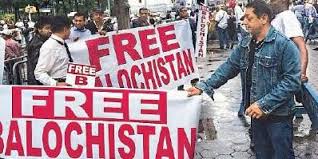 Balochistan, the most restive province of Pakistan, has entered into a new era of violence and dissent. Inputs of atrocities being committed on innocent civilians by the Pakistan Army and its sponsored terrorists are coming out frequently despite an attempt to keep the situation under wraps. The root of the problem lies in the fact that the people of Balochistan have never accepted their forcible merger as a province of Pakistan. The a beleaguered nation has been fighting for independence for many decades.

Historically, Balochistan has remained a sovereign nation for millenniums. It was illegally and immorally split by the British; first the western part was merged with Iran by the British in 1879, later, in 1893, the British merged the Northern part with Afghanistan, once again illegally. In 1928 Iran, under the monarchical rule of Shah Reza, forcibly occupied the remainder of the western region.  The Eastern remained a principality British protection; its main ruler was the Khan of Kalat.

In 1947, when the British left the sub-continent after partitioning it into India and Pakistan, Kalat-Balochistan remained a free and independent country. That was the time when India should have taken the initiative to merge the region with its Union. Sadly, the same did not happen.

On March, 27, 1948, seven and a half months after partition, Pakistan invaded and occupied Kalat. Pakistan Army arrested the elected representatives of Balochistan, abolished the Baloch government, and illegally merged it as a Province of the new Nation. The aging Khan of Kalat, Mir Ahmadyar Khan, approached India for protection but the same was not provided by the Jawahar Lal Nehru led government. Thus, Balochistan was forcibly inducted into the state of Pakistan.

Ever since, the province has been struggling for its rights; this struggle has taken the form of an open rebellion and a demand for independence. Many have lost their lives, honour and property in an environment of deplorable violations of human rights. Leaders and activists, including Mir Suleman Dawood Jan, the 35th Khan of Kalat, are living in self imposed exile and fighting in international forums for the rights of their oppressed people.

The Baloch people observe 13, November, as “Baloch Martyrs Day.” On this day, every year, they pay respects to those among their people who have attained martyrdom in the very legitimate fight for independence. Thousands of Baloch political activists, including women and children, have been killed in the decades-long freedom struggle. A large number are missing – allegedly lodged in detention centres by police and army.

The media blackout and state sanctions against free press in Balochistan have emboldened the forces to commit more atrocities and suppress Balochistan’s democratic voice.

The November remembrance is followed by sustained activism in the month of December. This year, on December, 10 that is internationally observed as Human Rights Day, the focus was on atrocities being committed by Pakistan Army and other Government forces on Baloch women and children. “Pakistan is committing war crimes in the broad daylight and before the eyes of the world. We do not ask our enemy to spare the freedom fighters and political workers, but we have always said that the world should bind Pakistan to respect the laws of war. Our women, children and the elderly are being abducted and killed by Pakistan’s armed forces,” says Allah Nazar, a well known Baloch activist while openly accusing Pakistan of committing war crimes.

The Baloch leaders look upon this policy of forcible abduction followed by rape and murder as a form of “collective punishment” aimed at crushing the freedom movement by breaking the will of the Baloch people.

The Baloch leadership in exile is consistently highlighting the plight of their people across the world and especially in forums associated with the United Nations. Baloch human rights groups gathered in London recently to accentuate the overlooked plight of the people of Balochistan. This apart a Conference titled, “The humanitarian challenges in Balochistan” was held at Germany by three organisation dedicated to the Baloch cause, namely, Baloch Human Rights Council (BHRC), Baloch Human Rights Organization (BHRO) and the Human Rights Council of Balochistan (HRCB). Also in December, about a week after the Human Rights Day, members of Baloch Republican Party (BRP) and Baloch Republican Students Organization (BRSO) held a protest in the South Korean city of Busan.

The message emanating from all forums is the same. It constitutes an appeal to the international community to intervene to stop Pakistan from committing atrocity at such a large scale and accede to the Baloch demand of total freedom, as is their right.

The exiled Khan of Kalat, Mir Suleman Dawood Jan is emphatically roots for a referendum to be held in Balochistan. He is certain that over 90 percent people will vote in favour of freedom. Why then is Pakistan keeping the region under its control forcibly?

Pakistan needs to be compelled by the international community to stop the systematic and organised campaign of violence that is specifically targeting women and children. Pakistan also needs to be stopped from tinkering with the culture, identity and way of life of the Baloch people. Once atrocity is stopped then the issue of the constitutional rights of the Baloch people can be arbitrated in accordance with the historical realities that govern the region.

The Baloch leadership is making fervent appeals to India for support. It wants Indian intervention to stop atrocities being committed by the Pakistani military forces and to assist in the freedom struggle.  They feel that if India could do so for Bangladesh it can do so for Balochistan also.

Pakistan cannot be allowed to literally annihilate an entire race with the use of brute force. Presently its actions in the unfortunate region can be categorised as crimes against humanity, genocide and ethnic cleansing. India has a particular responsibility to come forward and assist in every manner possible. It is the duty of the country to do so in concert with its policy of maintaining humanity and freedom at all costs.