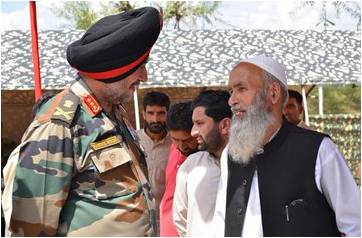 “Your best interests are uppermost in our hearts and we assure you of our support,” said Lt. General Ranbir Singh, Army Commander, Northern Command, to the locals of villages in North Kashmir during an interaction with them on 27 August 2019.

The interaction is significant since it comes against the back drop of a feeling of anxiety generated in the wake of reorganisation of the state into two Union Territories. The anxiety is a product of restrictions imposed by the Government in some areas. It is necessary for the people to understand that the restriction have been imposed to avoid damage to life and property due to agitations sponsored by such anti-national elements that oppose the democratic decision.

The Army Commander reached out to the people of North Kashmir with an aim to promote a sense of security and well being among them. Interactions were held at Village Vilgam in Kupwara District and at two places, Rampur and Boniyar in Barmulla District. People came out in large numbers to interact with The Army Commander who was accompanied by Lt. General KJS Dhillon, Commander of the Srinagar based Chinar Corps.

Lt. General Ranbir Singh informed the local populace about the present situation, security measures put in place for the safety and security of people and initiatives being taken by the Government as also by Army to improve the situation. He also answered the queries raised by the people. Members of civil administration, school teachers and children also participated.

The interaction dispelled all apprehensions being voiced by certain quarters in the political establishment and the media about the so-called disquiet due to the change being brought about in the political status of the region. Senior officers interacting with people freely serves as an indicator of the normal situation prevalent in the sensitive area. It is apparent that hype is being created in some sections to incite trouble.

The Army Commander advised the people to remain isolated from rumours and propaganda being spread by the enemies of the nation. The people left reassured that all was well and everything was under control.