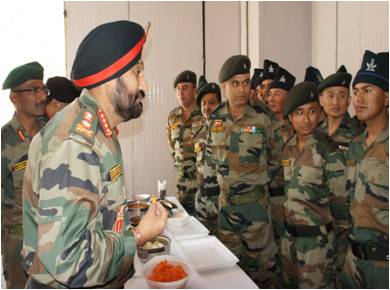 General Bikram Singh visited the sensitive Ladakh region over three days from August, 17. This was his maiden visit to the region after taking over as Army Chief. He was briefed in detail about the prevailing security environment, infrastructure, development projects and various initiatives undertaken by the Army in Ladakh. Over the next two days he visited forward areas in the Siachen glacier and Eastern Ladakh. Siachen glacier is known as ‘world’s highest battle field’ where the soldiers have to constantly combat hostile terrain and weather conditions. The Chief reviewed the logistical support structure available to the soldiers, flew over the line of actual control and laid a wreath at the Siachen War Memorial.

The Chief also met with the soldiers and the officers serving in the remote and inhospitable conditions. During the interaction he complimented them for their dedication and steadfastness while guarding the borders in such hazardous conditions and assured then quality support in operational and logistic requirements. General Singh emphasised the core values of the Indian Army and stressed upon the commanding officers to create a congenial climate in their units to enable collective growth of the organisation. The Chief expressed his satisfaction over the operational preparedness of the formation.

The importance that the Chief is giving to the sensitive state of Jammu and Kashmir can be gauged by the fact that this is his second visit to the Northern Command a within the first 100 days of his taking over. This is because the Northern Command pays the most dynamic role in the overall strategic perspective of the nation. The Siachen glacier has a unique position in the dialogue between India and Pakistan. It is evident that this region will hold primacy in the new Chiefs vision and policy planning