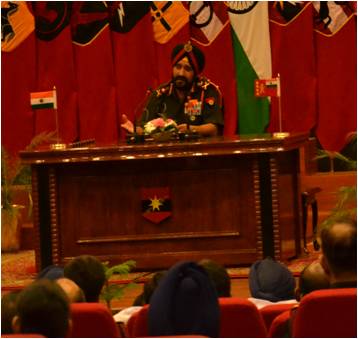 The Army Chief, General Bikram Singh, in a significant address to officers at Jaipur on July, 31, reiterated the external and internal challenges facing the Army and the collective efforts required in overcoming the same through commitment and professionalism. He emphasised on maintaining a high threshold of operational readiness to enable efficient discharge of the constitutional obligation and assigned role of the Indian Army. He emphasised that force modernisation conforming to a joint service environment and carried out within stipulated timelines would be given due impetus.

General Singh interacted with a large congregation of veterans and apprised them of the initiatives being taken by the Army towards the welfare of veterans, veer naris and widows. He also called on Srimati Margaret Alva, Governor of Rajasthan and Shri Ashok Gehlot, Chief Minister of Rajastan.

The address of the Chief assumes importance in regard to the twin issues of defense preparedness and acquisition. While the first is the duty of the rank and file the second is the obligation of the government of India through the ministry of defence. An assurance on sustained modernisation from the Chief indicates that things have started moving and that the shortfalls will be met in a timely manner. The Chief has made it a point to meet veterans and veer naris personally during his visits; the recent missive by the defence minister to the Prime Minister with respect to pay and allowances for both serving and retired personnel suggests that the commitment of the Army towards its veterans goes beyond mere interaction to embrace welfare measures in real earnest.