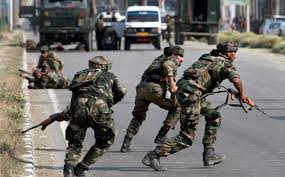 The killing of six soldiers of the Central Reserve Police Force (CRPF), while a few more including an SHO of the Jammu Kashmir Police and a civilian having sustained injuries at Anantnag, Kashmir, has set alarm bells ringing in the security set up of Jammu and Kashmir, particularly Kashmir. One of the two terrorists who carried out this Fidayeen (suicide) type of an attack was also gunned down while the second has managed to escape; a cordon has been put in place and he too will meet his fate in a matter of time.  The attack is highly condemnable. The nation stands with the families of the martyred soldiers, the policeman and the civilian.

A fringe terrorist organisation, Al Umar Mujahideen, has claimed responsibility for the attack. It owes allegiance to a Pakistan based terrorist outfit said to be led by one Mushtaq Ahmad Zargar, who was freed by India along with Masood Azhar in the 1999 hijack incident. The terrorists are said to have used automatic Rifles and grenades for the attack. Police has confirmed that the killed terrorist seems to be of foreign origin.

A detailed assessment of the incident raises certain issues with respect to the internal security policy and protocol being followed in Kashmir. Is it proper for security personnel to bunch up so closely that they are targeted effectively by two terrorists in broad daylight? How did the terrorists manage to get so close to the patrolling party? Why has the protective gear in terms of bullet proof jackets and bullet proof helmets not been able to take the brunt of the attack? One can understand injuries but outright casualties in this manner should be unacceptable to any professional commander, be it the Indian Army, the police or the paramilitary – as in this case.

Both Omar Abdullah and Mehbooba Mufti have condemned the attack and expressed solidarity with the martyrs, which is good. One is reminded, however, of the time a few years back when they created a big scene about the security bunkers in urban areas and got them removed. Had the bunkers been there, many of these casualties could have been avoided.

The government has not come out with an official statement. Such an approach looks better than the “Karhi Ninda” (strong condemnation) of the earlier days but only if some firm action is taken on ground to address chinks in the armour. Somebody senior like the Home Minister or at least the National Security Advisor (NSA) should visit the encounter site personally to assess the situation and the cause behind the incident. Strong corrective action, including sacking of such senior officers who are found to be wanting in the implementation of strict security protocols and standard operating procedures, would send out the right message.

Precious lives of soldiers are being lost in Kashmir. While not letting down the pressure on terrorists it is also necessary to ensure that the casualty rate of own personnel is brought down. This is possible by upgrading the level of leadership, training, weaponry, protective equipment and intelligence. If we keep accepting own casualties they will never come down, immediate corrective action in this regard is absolutely necessary.

The incident has cast a shadow on the forthcoming Shri Amarnath Yatra for which security is of primary concern. It needs to be admitted that fool proof security is not feasible and incidents do happen, more often due to mistakes by the pilgrims rather than the security forces. Nevertheless, security arrangements for the Yatra are comprehensive enough. There should remain no doubt in anybody’s mind that the pilgrimage, with intensive preparation by the security forces and complete support of the locals, will be conducted in a safe and secure manner.

Next in analysis come the external factor; since a Pakistan based terrorist organisation has claimed responsibility, quite obviously, the planning would have been done there only. It is not clear whether the terrorists involved have been infiltrated recently or were already functional in the Valley. Either way, a terrorist initiated operation of this nature requires a lot of preparation and motivation which has been forthcoming from across the border. It becomes quite clear that militant organisations within Pakistan continue to be deeply involved in the spread of terror within India, especially Kashmir.

Under the circumstances, the initiative by the Pakistani Prime Minister Imran Khan to press upon Prime Minister Narendra Modi  the need to resume dialogue hold no locus-standi, since India has made it amply clear that terror and talks cannot go together. In any case, Pakistan has no intention to change the status quo so far as Kashmir is concerned; by offering talks it is merely trying to impress the global community. It is continuing with its attempts to place itself on a high moral pedestal in the global arena, not realising that the international community is exasperated with the continuous double speak. The international community is also very worried about the impact of the breeding of violence in Pakistan on the world at large and India in particular.

Not much can be expected from Pakistan, so it is best for India to get its own house in order leaving the neighboring country alone to rot in its deceit and treachery which is leading it to its own break up.

The terror machinery in Kashmir is on to its last breath with intensive counter terrorist operations over the last few years having broken its back bone. The terror masters in Pakistan are desperate to keep the agenda alive and with great difficulty they manage to engineer, once in a while, terrorist initiated incidents of the type that has taken place in Anantnag. While it is impossible to ensure zero casualties of own troops the same can be brought down considerably with better management. Commanders must remain sensitive of the fact that the dying terrorist is very dangerous indeed since he has nothing to lose. It would be best to increase vigilance rather than bravado.

(Jaibans Singh is a reputed expert in security affairs)