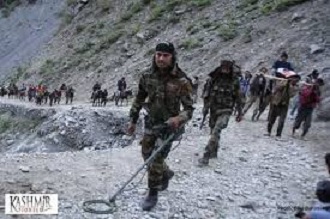 The pilgrimage to the holy cave of Amarnath in the Kashmir Valley is scheduled to commence on 2 July, on the auspicious day of “Massik Shivratri” in accordance with the Hindu calendar and culminate on 18 August, coinciding with “Raksha Bandhan.”

The holy cave of Shri Amarnath is located at the head of the Sind Valley in Kashmir, flanked in the north by the great Himalayan range and in the south by the Sasakat mountain range. It is located beside a small tributary of the Sind River called Amaravati.

It is believed that the Lord Shiva narrated the Amar Katha to Godess Parvati in this cave; it has been a place of pilgrimage since many centuries.

The Amarnath Yatra (pilgrimage) is an event that probably rivals the Kumbh Mela in terms of sanctity and religious significance. An annual feature, its uniqueness lies in the difficult terrain and the inclement weather that has to be overcome in order to reach the holy site.

Despite the turmoil caused by terrorism in Jammu and Kashmir, hundreds of thousands of pilgrims from all parts of the country and abroad visit the shrine every year. Even during the peak of terrorism, the number of pilgrims was always more than what the government could allow due to various reasons and time constraints; it continues to be so.

There, however, always remains a very real danger of terrorists trying to disrupt the Yatra. It is the security force deployed in the state – the Indian army and paramilitary troops along with the Jammu and Kashmir Police, who have the onerous duty of ensuring safe conduct of the pilgrimage.

It is only after the Army gives a go ahead on preparation of the route that the next step of starting the pilgrimage is taken. Mostly, it is sheer perseverance of the Army which leads to a timely conduct of the induction run and ensures that the Yatra begins on time.

When the Yatra begins, the Indian army stands alongside the organisers like the ever watchful sentinel, ready to respond to any exigency in accordance with a mantra of, “constant vigil and full preparedness.” Even though the given mandate is restricted to the provision of overall security cover, the force provides immense humanitarian aid to the pilgrims.

Throughout the Yatra, in addition to the arrangements made by the civil administration and other voluntary organisations, the army provides food, refreshment and shelter to thousands of pilgrims. Helping the aged and the feeble negotiate the adverse terrain was yet another goodwill gesture of the Army.

Children who are separated from their parents in the large crowds find friendly guides in the men in olive green who led them back to their worried parents.

The arduous trek and debilitating weather results in a number of pilgrims falling ill; the army sets up medical aid posts at various points along the route that are open to all civilians day and night. Thousands are rescued every year from succumbing to adverse weather conditions by this thoughtful gesture. This apart, the army carries out evacuations of serious casualties. Veterinary camps are also organised to ensure the safety of the ponies, pack mules and other animals used in the Yatra.

The army has exigency plans in place to meet any natural calamity which, one fervently hopes, is not required to be activated.

The alacrity with which the Army responds to emergency, however small, and the integrity with which it performs its duty leads many to acknowledge the support with words of praise and admiration.

The mere presence of the Indian soldiers gives a sense of security to the pilgrims who tread the dangerous unforeseen terrain. It is not without reason, therefore, that the army commands such respect in the eyes of the pilgrims.

The army, by virtue of its size and wherewithal, plays a more prominent role that, by no mean, belittles the excellent effort put in year after year by the paramilitary forces and the Jammu and Kashmir Police.

It is, however, the locals of the area who provide the fulcrum for the success of the Yatra. Unmoved in their faith and devotion to the shrine, the Muslims of the area have never heeded the diktats of terrorists and they participate in the pilgrimage with fervour equal to that of the Hindus.

What is most unfortunate is the political narrative within the valley with regard to the Yatra. With utter disregard to the religious sentiments of the people, self proclaimed leaders who go by the terminology of “separatists,” ably supported by the terrorists, do not relent from politicising the Yatra at every conceivable opportunity.

Year after year, the conduct of the Yatra is subject to avoidable political rhetoric and veiled threats terrorist attacks. A fear psychosis is created to dissuade pilgrims from taking the pilgrimage. This year has been no different. Notwithstanding these evil designs, the people remain steadfast in their belief in the holy shrine. It is best to dismiss any pessimism that may have come by due to the unholy threats of violence, negative statements and obnoxious politics being played by a few and concentrate on the smooth conduct of the Yatra.