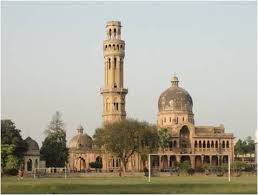 The Department of Defence and Strategic Studies, Allahabad University, held a national seminar with the theme “Challenges to India’s peace and security from its neighbours” on October, 8 and 9. The seminar was inaugurated by former foreign secretary Lalit Mansingh. A large number of academicians addressed the seminar; think tanks like the Centre for Air Power Studies and Defenceinfo were represented.

Two speakers, Jaibans Singh, the Editor of www.defenceinfo.com and Dr. Simrit Kahlon from Punjab University articulated the challenges posed to Jammu and Kashmir from its immediate neighbourhood. The speakers opined that with terrorism on the wane the centre of gravity had once again shifted to the people of the state.

Jaibans Singh emphasised that the objective of Pakistan was always to engineer a mass uprising. An attempt was made in 1947 and again in 1965 but no success was achieved on both occasions. It was for this reason that the policy of a thousand cuts with terrorism as the mainstay was adopted. After decades of mindless destruction Pakistan has realised the desired objective of wresting Kashmir from India cannot be achieved through terrorism alone. The focus, therefore, has shifted back to engineering a mass uprising by winning over the people. In other words, perceptions have gained centre stage.

Religion is being used as a primary tool to achieve this objective; a concerted attempt is being made to demolish the enlightened and secular Sufi culture that forms the basis of Islam in the Kashmir valley and replace it with the Wahhabi concept practiced in the Middle East – especially Saudi Arabia. A lot of money is being pumped into the Kashmir valley to create Madrasas (Seminaries) and build Mosques to propagate the Wahhabi and Salafi form of Islam. The speaker clarified that he has no issue with Wahhabi form of Islam or any other religious practice. The issue at hand is the attempt to erase, through money power and coercion, traditional Sufi beliefs being practiced in Kashmir for millenniums.

Another matter of concern identified by Jaibans Singh was the effort being made by terror organisations like the al-Queda to establish a footprint in the Kashmir valley. Kashmir is the base selected by the terror organisation for its India operation named al-Queda in Indian Sub-continent (AQIS). It is from Kashmir that the tentacles of this evil plan are proposed to be spread across India. Through videos and social media tools Kashmiri youth are being instigated by al-Queda to follow the example of the “Syrians brothers” and rise under the flag of Jihad. Even the ISIS has registered a presence in the valley as has been seen by the raising of its flag in certain areas of Srinagar.

“Weakening of the younger generation in Kashmir through the curse of drug abuse is the primary intention of the infamous Inter Services Intelligence (ISI) of the Pakistan army,” said Jaibans Singh. The ISI believes that its failure in controlling the Kashmir valley through spread of terrorism can be set aside by addicting the youth to drugs and substance abuse. Hundreds of kilograms of drugs sourced from Pakistan are being smuggled into the valley through various means including the trade facility created as part of confidence building measures between Indian and Pakistan.

The Indian State and its people have normally expressed their opinion in three kinds of voices; the Kashmir based mainstream parties being left of centre espouse the cause of autonomy/self rule for Kashmir, the right of centre voice of nationalist parties like the BJP questions the grant of special status and privileges to the state of Jammu and Kashmir.

The government of the day in Kashmir tends to adopt a passive approach; it simply responds from crisis to crisis and expects the central government and the security forces to clean the mess created by the divisive forces through engineering of disruptions in the form of Hartals, Bandhs, stone pelting etc.

Dr. Simrit Kahlon considers the Kashmiri perspective to be divorced from reality. She holds an opinion that the Kashmiris have created in their minds a narrative of the armed state terrorising the languishing citizen. They have convinced themselves that India and its security forces are an occupation force out to destroy the socio-economic system. This misplaced perspective has largely been propped up by the propaganda of foreign sponsored elements that is not adequately countered by the ineffectual State Government.

In the entire process, what gets ignored is the multitude of other voices within the state of J&K; the voice of the people of Jammu and Ladakh; the Dogra, Ladhaki, Gujjar and the Pahari voice and many more sub-regional and marginalised voices. It is important to work towards creating a space of expression for these voices as well to present a more holistic and balanced view of the Kashmir problem.

The Pakistani State and its people are far more proactive. The mention of Kashmir appears in their normal day to day conversations. Their involvement with Kashmir is visible and may even be construed as their reason for existence.

For India the criticality of the whole process of managing perceptions lies in limiting the number of young locals who get radicalised and take the path of militancy. In recent times there have been reports of young educated people of Kashmir taking on the mantle of Jihad, Such an eventuality will take the clock back to create an era of violence that has been contained through great sacrifices. This drift has to be contained under all circumstances by using all instruments of state power as well as the moderate voices.