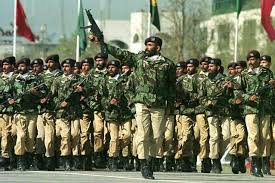 The Pakistan army has, since the inception of the nation, positioned itself as the savior of the country; an entity without which nothing can function. It has projected itself as the defender of the faith against a much bigger and malevolent neighbor like India and guardian angel of the people against corrupt politicians.

The Tehreek-e-Taliban Pakistan (TTP), however, is giving an entirely different narrative of the contribution of the army to the nation. In a Youtube video, a senior leader of the TTP, Adnan Rasheed, who was earlier an officer with the Pakistan Air Force, has explicitly laid down the manner in which the Pakistan army has let down the country and its people and continues to do so.

Adnan Rasheed has held forth a view that the people of Pakistan have always come out to assist the army when called upon to do so for the sake of the country. In the war against India in 1947-48 and again in 1965 the Mujahedeen responded to a call for Jihad given by the army and fought in Jammu and Kashmir. The Mujahedeen again responded enthusiastically to the call for Jihad in Afghanistan even as engagement in Jammu and Kashmir continued in the form of cross border terrorism.

In return, says Adnan Rasheed, the army carried out rampant killing in Baluchistan. It raped its own sisters and killed its own brothers in East Pakistan leading to the division of the country. It advocated Sharia during the times of President Zia-ul-Haq and shamelessly turned to advocacy of democracy at the behest of western powers. It then turned the entire tribal region of Swat, North and South Waziristan into a vast killing area to please these very western powers. Adnan Rasheed further says that the situation now is such where a soldier cannot move freely in Pakistan due to the hatred that the people feel for him.

There is a strong element of truth in the view about the Pakistan army articulated by the TTP. It cannot be denied that the army has, over the years, presided over the tearing apart of the nation. The very premise of threat from India, on the basis of which it assured its dominant position within Pakistan, is shaky today since India has shown no hegemonic desire against Pakistan. Successive governments in India have been at pains to assure Pakistan that India looks upon a peaceful and developing neighbor as an asset rather than a liability or a threat.

The TTP may be right in its assessment of the Pakistan army but it is also a curse for the country. It is a merciless, sadistic, unscrupulous, self-serving organisation ready to go to any extent to fulfill its lust for power. Interestingly, TTP is a creation of the army and the Inter Services Intelligence (ISI); a Frankenstein monster that has turned upon its own master.

The strife between the army and the TTP has driven Pakistan and its people into an abyss of despair. The army as a newly converted champion of democracy in involved in a fight to the finish with the Sharia advocating TTP. The resultant face-off has led to thousands of deaths in North Waziristan as part of Operation Zarb-e-Azb launched over there with the objective of “clearing the area of militants.” The gory retaliation by the Taliban is exemplified by the inhumane attack on the Army School at Peshawar by the TTP that came along with an assurance that many more such strikes will be made in the future.

The TTP has set out a path for dominance of Sunni Islam and is fructifying its evil agenda with rampant killing of the non-Muslim minorities – Hindus, Sikhs and Christians. Shia Muslims, Hazaras, the Mohajirs in Karachi and Baluchistan and such like minorities of the Muslim Ummah are also being targeted with impunity.

Pakistan is witnessing polarisation, sectarian violence, killings in the name of Jihad, ethnic cleansing, deteriorating economic conditions and political instability bordering on the derailment of democracy. The country is being torn to pieces by unscrupulous forces that invoke the name of Allah to justify the path of destruction that they are following. The Nawaz Sharif government stands a mute spectator on the sidelines.

As the ISAF prepares to leave Afghanistan the relevance of Pakistan for the US stands diminished. The evolving situation has brought about a paradigm shift in US policy and attitude towards Pakistan. Aid, earlier given with utmost excitement is down to a trickle and is now contingent to a series of moral lectures and calls for strict action against forces of terror. Since the government of Pakistan is unable to comply to this demand the relationship seems to be at its last breath.

It is often said that three A’s – Allah, Army and America rule Pakistan’s destiny. Today, as things stand, it seems that Allah, Army and America have forsaken Pakistan. It is sad that the name of Allah has been invoked in the unfortunate land to heap barbaric atrocities on innocent people. The Pakistan Army has, without doubt, presided over the decimation of the country only to maintain its supremacy on the civilian establishment. America has taken what it wanted and is now ready to dump its long term ally.

The people of Pakistan now need to shed the influence of the army and show America that they can stand on their own feet.

Pakistan has to realise that its destiny is being manipulated by some forces for vested interests. It needs to now shed the baggage of self serving motives and carve out its destiny on the strength of hard work, honesty, morality and uprightness. As it moves on this path many genuine friends will join the noble effort.