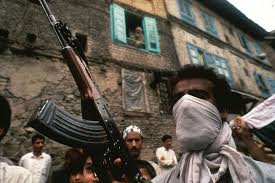 Mannan Bashir Wani, a young student from Kashmir was pursuing Ph.D. in earth science-Geology from Aligarh Muslim University. One fine day, he marked his presence in the roll call for the last time and headed home to Tekipora village in Lolab of Kupwara district in north Kashmir. Three days after his departure, a photo of a young man of fair complexion, sporting a bread and  holding an AK-47 in his hands went viral on social networking websites in Kashmir. The young man was none other than 25-year-old Mannan who had joined the ranks of Hizb-ul-Mujahideen. Mannan hailed from a well-educated family, his father is working as a lecturer and brother is an engineer in the state government. He had enrolled in the Ph.D. course a year earlier.

This is the new face of militancy in Kashmir!  The number of local youths joining the ranks of militants registered perceptible increase post the agitation that erupted in July 2016. Daily intelligence briefs prepared by various agencies invariably have a new name added to the list of new recruits to militancy. Security agencies have put the figure at nearly 250 till December 2017. The trend has become a reason for alarm and worry for the law enforcing agencies as well as the security forces.

According to sources, 117 youths joined militant ranks in Kashmir in 2017 even as more than 200 have been killed, including terrorists of foreign origin. This constitutes the highest figure in the last seven years.

In many case the youths, as in the case of Mannan Bashir Wani, have professional degrees to their credit and have left behind bright careers to join militancy. Many have had a stint as militants lasting only a few days before being eliminated by the security forces. Some names in this category are Rafiq Ahmad Ahangar, 23, alias Saifullah who was killed in an encounter in May 2013 in Pulwama. He had completed B-Tech from a local engineering college. Another militant, Masiullah Khan, from south Kashmir, killed in 2011, had a degree in mechanical engineering. Sajad Yousuf, a Hizbul Mujahideen militant from Pulwama district, had a post-graduate degree in Islamic Studies and was killed in June 2013. The main recruiters for the youths were Hizbul Mujahideen and Lashkar-e-Taiba.
The state police is tight-lipped over the disturbing trend and maintains that it is assessing the reports of missing youths, but security agencies have, off the record, acknowledged that the situation on the ground is worrisome and action needs to be taken at the earliest.

South Kashmir, a traditional bastion of ruling PDP which is having an alliance government with the BJP, has turned into a virtual breeding ground for militants with many youths joining their rank or becoming their sympathisers. The main affected areas from where youths were reported to be missing include Shopian, Kulgam, Pulwama and parts of Awantipora in south Kashmir and certain areas of downtown Srinagar. An axis from Tral to Yaripora in south Kashmir is witnessing a dominance of Hizbul Mujahideen while in the other axis, from Pattan to Sopore, Jaish-e-Mohammed and Lashkar-e-Taiba are calling the shots. Movement of foreign militants has also been reported in various areas of the region.

It is quite common to have locally trained militants accompanying the foreign terrorists. This is because the locals have more intimate knowledge of the topography of the region and are invaluable as guides. They, of course, do not have the requisite training and experience to function independently. However, a shortage of terrorist cadre has led to the leadership of some small groups passing on to the local Kashmiri boys, despite their inability to handle the situation.

It is widely perceived that there is a lot of difference between the present day local militants and those who chose the self defeating path in the early 1990s. While the ideological conviction continues to be the product of foreign sponsored indoctrination and a misplaced sense of being victimised, the level of commitment that comes with extensive training is missing.

A recently arrested militant of Hizbul Mujahideen and JeM, significantly, has warned about heightened militancy in the coming months. Security analysts are also voicing an opinion that local recruitment, which had come down to a trickle, has picked up suddenly. The missing boys are being described as the new faces of militancy in Kashmir and they are believed to be waiting for delivery of arms.

It can be safely surmised that Kashmir is witnessing a trend of ‘Pan-Islamisation’ where the young boys are opting for the path of militancy knowing full well that they are at the risk of being killed. The latest spurt in locals joining militancy began after the killing of Hizbul Mujahideen’s poster boy Burhan Wani in an encounter in South Kashmir on 08 July 2016.

Under the circumstances, the state government needs to acknowledge the situation and put in place a coherent policy to contain the downward trend. To remain in a state of denial, as has been witnessed in some segments of the government, would be counterproductive and very dangerous for the youth, who are being drawn towards this self-destructive path. There is a need to challenge the well laid out plan of indoctrination and psychological conditioning being carried out by some sold out locals at the behest of inimical foreign agencies.

The effort has to permeate from the basic unit of family, relatives, civil society and schools to the stage where the grown up boys are kept under a close watch to ensure that they do not get drawn towards militancy, a path where a violent death is assured. Lasting peace can prevail in Kashmir only when locals are absolutely and totally weaned away from militancy and it is here that maximum effort needs to be concentrated by the government.