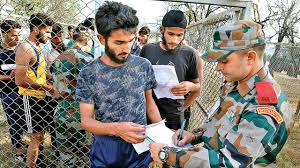 Immediately after the Parliament legislated for bifurcation of the state of Jammu and Kashmir into two Union Territories and also toned down such provisions of Article 370 and Article 35A that were inhibiting the freedom of many segments of the citizenry, the Government of India imposed certain restriction on movement and communication within the state. The Government has done so since certain anti-national forces operating in the state at the behest of foreign powers attempt to create a sense of insecurity among the people, build up passions and disrupt peace in the state; it was deemed necessary to pre-empt theses evil designs of the enemy by imposing restrictions.

Though these restrictions have been removed in a phased manner they have hit the economy of the state quite badly. While the entire state has borne the brunt of this economic setback, it is the youth who have been affected the most. Already reeling under chronic unemployment, they have been idle and without hope during this time.

Now that the situation is becoming normal, there is a perceptible movement towards economic uplift of the state, especially for the youth. Admissions under the Prime Minister’s Special Scholarship Scheme (PMSSS) were to be completed by August, 15. In view of the prevailing conditions, the administration approached the Supreme Court to extend the deadline by one month to September, 15. The Supreme Court passed the required order, and as a result, 4,418 students took admission under the scheme this year as compared to 2,543 in 2018. “J&K scholarship scheme of Govt got major success this year with a 74% increase in J&K students taking admissions in reputed institutions outside J&K. Thanks to streamlining of processes by AICTE,” said R Subrahmanyam, Secretary, Ministry of Human Resource Development in a tweet.

In the last week of August, the then Governor of the state, Satya Pal Malik, said that 50,000 jobs will be created for the youth of J&K. The Armed Forces were identified as the best avenue for job creation.

The first Army recruitment rally, post the political changes, was held in September, 2019, for youth belonging to the Chenab Valley and Pir Panjal region. A record 29000 youth participated in the rally; all available vacancies were filled in no time. Another recruitment drive conducted over four days in mid-October at the Srinagar based Jammu and Kashmir Light Infantry (JAKLI) centre witnessed participation of thousands of candidates from Anantnag, Kulgam, and Pulwama of Kashmir. The vacancies were for Infantry Battalions of the Territorial Army (Home and Hearth) which operate within the state itself and have given invaluable service in containing the foreign sponsored terrorism. Such massive turnout reflects the desire of youth of J&K to join mainstream and serve the nation. The Jammu & Kashmir Police Department, in October, 2019, invited on-line applications for the recruitment of both male and female candidates for 2,700 Constable Posts.

In mid-2018 a survey conducted by the Centre for Monitoring Indian Economy (CMIE) in collaboration with the Bombay Stock Exchange (BSE) found that Jammu and Kashmir had the highest unemployment rate of 12.13 per cent. As per another Economic Survey Report of J&K, the unemployment rate in the state was pegged at 24.6 per cent. however, in the age-group of 18 to 29 years it was said to be 13.2 per cent. The number of the unemployed youth registered with various District Employment and Counselling Centres of the J&K state was 85,944 youths (around 42,219 from Kashmir and 45,821 from Jammu) as of March 2018.

Earlier state governments, with support of the centre, set up various schemes for boosting employment. The J&K Entrepreneurship Development Institute (EDI), whose building in Kashmir has been attacked by terrorists on a number of occasions, is funded by the state employment department to assist youth in setting up business ventures. The institution runs a Seed Capital Fund Scheme which facilitates setting up of entrepreneur projects by providing non-refundable seed money to take them forward. Another initiative, the Youth Start-up of Loan Scheme gives soft loans at six percent simple interest for setting enterprises. Self Help Groups (SHG) are also being promoted to assist Engineers with the grant of contracts in the Works/Development Departments.  Career counseling Officers have been appointed for providing counseling/guidance to the educated unemployed youth. Job Awareness Fairs are conducted regularly across the state.

Since the last three decades, the army, under its flagship welfare programme, Operation Sadbhavna, is, making efforts to bring the state into the mainstream of the country’s growth trajectory. Army Goodwill Schools were instrumental is meeting the pressing educational requirements at a time when government education infrastructure collapsed under the terrorist threat. In an effort to involve the youth in gainful and constructive activity, the army has established a number of Youth Employment Guidance Nodes (YEGN) that provide information regarding employment opportunities. Vocational training centres have also been set up to train to the local populationin a trade of their choice. In these centres, the teachers employed hail from amongst the local population, making them more acceptable to the people in addition to creating more employment. The ‘Kashmir Super 30’ project launched in 2014 by the Army and modelled after the well-known ‘Super 30’ programme of Bihar has elicited excellent results year after year.

All measures to enhance employment that have been in place since the beginning of this millennium have, sadly, proved to be insufficient in dealing with the economic downslide in the state. There is an urgent need to bring in new initiatives and put in more effort to bridge the employment gap. Tourism, IT, Handicraft, Apple trade and other economic activities need to be given a boost. Employment of youth outside the state in various corporate organisations, institutions etc will need special attention. If the youth of Kashmir find a means to live a life of dignity the problems being faced there will be resolved to a great extent. A lot has been done but much more is required.