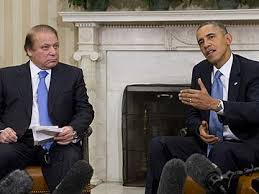 Hours after committing in a joint statement with President Barack Obama to take effective action all militant groups, Pakistani Prime Minister Nawaz Sharif made a U-turn by telling a think tank that he could not be expected to bring the Taliban to the negotiating table “and be asked to kill them at the same time.” This was the real Sharif who spoke from his heart!

Sharif knows his weaknesses. He risks his survival if he is forced to take action against the Taliban and other home-grown militant organizations, which have the support of the military leadership. The Pakistani army has invested so much in myriad of terrorist organizations that any action against them would entail serious repercussions back home. Pakistan has been periodically using these organizations to further its own interests, be it in Kashmir or in Afghanistan.

An exasperated US wants to get out of Afghanistan, but it is easier said than done. The Afghanistan crisis has prolonged beyond US expectations. And it has taken a very heavy toll on the US – both financially and militarily. Not only have the Taliban forces recouped and gathered strength, the deadly Islamic State is also spreading its wings in the war-torn country. Therefore, the US is nudging Pakistan to crack down on the militants threatening US interests in Afghanistan while simultaneously encouraging it to open talks with them to find a negotiated political solution.

Sharif is not wrong entirely. One can’t have talks and military crackdown against the Taliban or for that matter against any militant organization simultaneously. Here the US can be faulted for putting a trigger on Sharif’s temple.

Sadly, Afghanistan is showing signs of Iraq where US misadventure has led to the civilian strife after it toppled the regime of Saddam Hussein. Aware of the mistakes which led to the rise of Islamic State in Iraq, the US has developed second thoughts in withdrawing its troops from Afghanistan sooner. There is every possibility that a wounded Taliban can stage a return once the western forces leave Afghanistan leaving an unstable government with the near impossible task of defending the territory against the powerful insurgents. Therefore, the US is looking for a limited but political role for the Taliban in Afghanistan where the situation does not slip deeper into the abyss of anarchy.

The need of the hour is to go all out against all militant groups active in Pakistan and Afghanistan. These jehadi organizations pose a threat to the entire humanity. The practitioners of death and destruction can’t be brainwashed into joining the mainstream as they are opposed to basic tenets of Islam which does not preach hatred and innocent killing. Until and unless all the militant groups are completely annihilated, the idea of talks at this juncture would not be prudent but counter-productive. But for that to happen, all stakeholders need to be on the same page. Pakistan’s political and military leadership will have to stop playing double games with western forces as they have been doing for the last several decades.

Therefore, the US should goad Pakistan into taking action against all the jehadi elements in its territory. Because most of the attacks in Afghanistan have been planned and executed by Taliban and al-Qaeda militants who slip back into Pakistan to their safe haven after crossing the porous and largely unguarded border.

It is high time for Pakistan to realize that it is playing with fire by creating a proxy of unprofessional soldiers who can always turn their back to it and unleash a reign of terror in their self-goal of establishing an Islamic caliphate, or state, and imposing Sharia law. Pakistani leadership has often cried hoarse that it is also a victim of terrorism. Is somebody else to be blamed for the mess that Pakistan finds itself in? There is no doubt that Pakistan has suffered heavily whenever the home-grown terrorists turned their ire against it. The dastardly massacre of 145 people, mostly children, in a school in Peshawar last December should serve as an eye-opener for Pakistan. In fact, Pakistan-backed militants have caused more deaths and destruction back home than elsewhere.

Both Pakistan and the United States need to realize that the war against terrorism cannot be won through half-hearted measures. Time is not ripe for a two-pronged strategy to have both military action and peace talks simultaneously. The crisis requires a bold response. All efforts should be made to launch a complete war against militants so as to bring them to their knees. Only then can one compel them to join the negotiating table. Once Pakistan withdraws its support from militant groups, they will have nowhere to run. If Pakistan has to survive and escape the ignominy of being dubbed as a rogue state, it will have to change its definition of good militants and bad militants. Militants are militants and there should not be any political truck with them. Period!

(Vikas Khanna is a senior and reputed journalist)