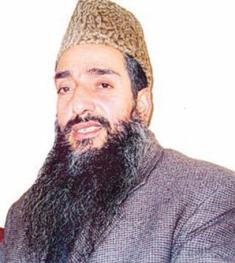 Maulana Shaukat Ahmed, the soft spoken, 55 year old chief of the Jamiat-e-Ahli-Hadees (JAH) has become yet another victim of violence in the strife torn Kashmir valley. His assassination has caused shock waves in the region. The Maulana had been heading the JAH since 2004, when he was first elected President, followed by three more tenures in this responsible position, his last election came in 2010. Under his stewardship the JAH is said to have about 15 lakh followers and more than 800 Mosques spread across the valley.

The notable cleric was a man of conviction who did not hesitate from speaking out his mind. His organisation advocated a puritanical concept of Islam which is at variance with the more moderate Sufi Islam predominant in the Valley. He held pro-freedom views and yet he was known to be a liberal who was very vocal against all forms of violence. He openly denounced stone pelting and other such disruptive activities as un-Islamic and went to the extent of issuing a fatwa against them. In the process, he earned the ire of the likes of Syed Ali Shah Geelani but was undeterred in his ideas. He had no qualms in engaging with the interlocutors appointed by the Centre and despite raised eyebrows from the separatist camp, he held several discussions and parleys with them. In short, the Maulana was a person who chose to tread the righteousness path. It is possible that his liberalism and open thinking led to the two earlier attempts on his life in 2007 and 2008 while the third one was unfortunately successful.

Even though the Valley has maintained calm in the face of this major tragedy and set back to the peace process, conspiracy theories by certain segments of the leadership are flowing fast and furious. Geelani has termed the incident as, “the handiwork of the anti-Kashmiri and anti-Islam elements”. Nayeem Khan termed the killing as, “an act of enemies of the people of Kashmir who are hell-bent to divide the society and create a wedge among people”. Moulana Abass Ansari also feels that this is a conspiracy to create a wedge between people to weaken the ongoing movement.

These leaders seem to be implying that the assassination has been committed by some non-Kashmiri and non-Muslim entity. This effectively excludes Pakistan sponsored terrorists and Kashmiri militants (who are mostly in the forefront for committing such atrocities) from the list of suspects and it leaves only Hindu Indians as the possible perpetrators of this heinous crime. Without saying as much, these leaders are giving vent to vitiating divisive propaganda and blatant rumour mongering. Soon enough, talk of the possible involvement of the security forces and other government agencies will also start doing the rounds.

This thought process is also in accordance with certain intercepts from across the border in which leaders of the Lashkar-e-Taiba have been heard directing their cadre and some elements of the media to spread a rumour that the killing was a handiwork of some Hindutva group.

If we look at capabilities and a possible motive for those on whom fingers are being pointed, we would come up with a different set of deductions altogether. Firstly, the Hindutva groups do not have that kind of presence in the Valley which would make it possible for them to carry out a high profile assassination of this nature even if they nurtured a desire to do so. Also, if they had an option of choosing a target, Maulana Shaukat Ahmed would be pretty down in their order of priority. Next, the security forces and government sponsored agencies would not wish to rock the boat at this point in time when they are looking for ways and means to maintain peace in the Valley through the coming summer. The winter month would have been better period for them to carry out such elimination exercises in case they desired to do so.

There is possibly a much larger, much more sinister design behind all this. It could be that Pakistan sponsored terrorist groups wanting to resurrect the failing morale of their cadre, had ordered this killing to remove a liberal moderate leader from the scene and at the same time set the pace for terrorist activity through the incoming summer months. It could be the result of a rivalry involving ideological, religious or political differences. It could be a personal vendetta. It could also be an accident, maybe the killers simply wanted to create mayhem and the Maulana became an unwitting target.

Maulana Shaukat Ahmed was a good man. In the coming years he would have played a significant role in resolution of the Kashmir imbroglio. He had the vision, the stature and the capability to emerge as a leader of prominence. His unfortunate murder has been committed by someone who is an enemy of the people of Kashmir and the people of India. It is most important to find out the perpetrators of this heinous crime so that the real enemies of the people stand exposed. Both Yaseen Malik and Mirwaiz Omar Farooq, who held the Maulana in great esteem, have expressed their resolve to flush out his killers. In this case, political rivalries should be set aside and a joint effort made to reach to the bottom if this heinous and senseless crime. It is also necessary to expose conspiracy theories as brands of political opportunism that they are in actuality.

The Maulana was the first to demand an inquiry into the into the killings of separatist leaders like Mirwaiz Farooq, Abdul Gani Lone and Qazi Nissar and it was as a follow up to his statements that the Hurriyat leaders Abdul Gani Bhat and Sajjad Lone openly said that these leaders had been killed by “our own men”. Now is the time to pay last respects to the departed soul by bringing his killers to justice.