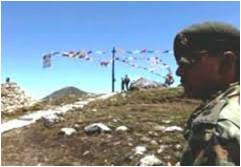 The recent incursion by troops of the Peoples Liberation Army (PLA) of China into Indian territory at Daulat Baig Oldie (DBO) has, quite surprisingly, not elicited the kind of national response that one would have looked forward to. What is more astonishing is that media is also quite “cool” towards the incident. There have been very less debates on television; such debates, of course, provide no solutions but they do help in keeping an issue alive and in the public eye. Newspapers have not carried many articles and opinions on the subject; in fact, the matter was taken off from the front page within the first few days. The social media has shown minimum excitement. One cannot help but get an impression that media is toeing the government line of being absolutely tight-lipped where the “C’ word is concerned. It seems that the incursion has been accepted as a fait accompli and it is business as usual so far as India is concerned.

Historically, India is not known to look towards foreign occupation as a big deal probably because it happened so frequently. It is the day to day scandals that are given more important over here. In this case also history seems to be repeating itself with the coal scandal, the chit fund scandal etc catching the imagination of the people and the media more than the few kilometres of barren land being occupied by a foreign power. This attitude can lead to a national disaster in the long run.

Sage voices, therefore, have to dwell on the mess and consider its ramifications. DBO lies barely 30 kilometres from the Khunjerab pass that connects China to Pakistan via the Karakoram Highway. It is from this sector that the activities of Chinese and Pakistani armies along the Karakoram Highway are monitored. Besides, it provides access to Aksai Chin.

In recent times the communication infrastructure in the area has been improved by the Indian army; the most important development is reactivation of an airstrip in DBO that had been lying unused for some time now. This thrust to development spells out the strategic importance of the area.

Chinese incursions do take place, on and off, along the line of actual control and are passed off as localised incidents caused by informal demarcation of boundaries. In the present instance however, a sizeable strength of troops has intruded with an intention to stay and has established a tented colony in Indian territory. Two flag meetings held to diffuse the situation have been unsuccessful in getting the Chinese to pull out. The standoff has continued for an unprecedented period of time. It is quite evident that the whole operation is not pro-activism by some local commander. It has been approved at the highest level and is being conducted in a well planned and well thought out manner.

The Chinese intentions in this case, as in other such matters, are not very clear. Is the new Chinese leadership trying to show that it will not be a push over? Is it actually treading a dangerous path of confrontation that would spell danger for the entire South Asian region? Is it a unilateral decision by the PLA to establish its superiority on the new leadership? Is it China’s way of registering a protest against the Indian force build up along its frontiers in both the Northern and the Eastern sectors? The matter also needs to be seen in the larger context of Chinas growing belligerence in the South Asian neighbourhood. Of late, China has resorted to aggressive posturing in areas of the South and East China Seas where it has issues with Japan and a few other countries. Its activities in Pakistan and Pakistan Occupied Kashmir which are against India’s interest are well known. These are the complexities that the Indian government has to look into while dealing with the situation.

The China Study Group, headed by the National Security Adviser with the Cabinet Secretary and Secretaries of Defence, Home and External Affairs as members, has been given the responsibility to advise the Prime Minister’s Office on the course of action. The group has recommended diplomacy as the first option and this is what the Indian government is doing for the moment. India as placed a larger body of troops in the vicinity of the Chinese incursion and created what the MEA calls a face to face situation; having done so the army has been told to exercise restraint.

There are many in India who are not happy with the passive response being adopted by the Indian government. They would prefer a proactive military intervention like cutting the supply line of the force that has intruded. Diplomatic maneuvers can carry on alongside. This thinking is based, rightly so, on the premise that a passive response will embolden the Chinese into getting more brazen in their approach. There is a strong opinion that China has taken this step only because India chose to turn a blind eye to the smaller incursions that took place in the past. There is an urgent and immediate requirement to push the intruders back. In case they are allowed to stay for too long, other intrusions might occur and military resources in the vast area will get stretched to an unacceptable level.

The incursion is an incident of much more importance to the nation than the scams that we seem to be preoccupied with. It is akin to what happened in Kargil albeit at a lesser scale. There is a strong case for extensive public debate so that, not only China, but the entire word gets to know the country’s concern and that we, as a nation, will not take such belligerence lying down. In all this, the media has to work in close coordination with the government and generate the desired public support for an important national cause. The existing veil of secrecy and unconcern is not helping the nation in any manner.