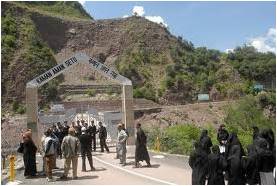 Salamudin Khatana, Muhammad Haneef and Shakeel Ahmad Tass are three Kashmiris who answered the call for Jihad and crossed over to Pakistan Occupied Kashmir (POK) during the times of peak insurgency and terrorism. It is possible that, after training, they were re-inducted for spreading terror in Jammu and Kashmir; they may have come to Kashmir a few times and got back once the “tenure” came to an end. It is also possible that they were found unfit and left to fend for themselves. Whatever the past held for these middle aged men with large families, they now seem to be on the verge of destitution and are desperate to get back to Kashmir. It is this desperation that impelled them into coming to the entry point, Aman Setu, on June, 24, and attempt an illegal crossing. The Army personnel deployed over there were polite but firm. They told the men and their families to go back and arrange for an entry through legal means as laid down by the government.

It may be recalled that four entry points have been designated for such “stranded ex-militants” who are cleared to come back to their homes in accordance with the surrender and rehabilitation policy. These are Poonch-Rawalakote, Uri-Muzaffarabad, Wagah in Punjab and Indira Gandhi International Airport, New Delhi. There are other procedures which have to be completed before clearance is granted to enter the Nation. It may also be recalled that despite a sincere effort by the Indian side to further this initiative, it has received no positive results. It has failed to take off mainly because there is no cooperation from the Pakistani side.

The failure on the official front has led to a spate of attempts to cross over illegally. Such activity has earlier been reported mainly from the Indo-Nepal border; now the LOC also likely to become active. In some instances the government has taken a humanitarian view and allowed the people to come in. However, it has been realised that such attempts cannot be encouraged since they have inherent security implications and they go against the tone, tenor and spirit of the original surrender and rehabilitation policy. Apprehensions have been raised from various quarters about militant organisations using this opportunity to send their cadre back into the valley to give a boost to the waning cult of terrorism. Chief Minister Omar Abdullah has personally voiced apprehensions about the recycling of surrendered militants and the prospective returnees from POK.

As with everything else in Kashmir, this issue is also being politicised by vested interests with maximum blame being apportioned on the Army. The strongest voice has, predictably, come from Mirwaiz Umar Farooq who has called for a letdown in the checking procedure for those coming in from Pakistan as part of the cross line of control (LOC) travel. In his usual dramatic style, the Mirwaiz has said that those coming across are being treated like “prisoners of war”. It is quite difficult for any educated, rational human being to decipher as to how visitors can possibly be treated like prisoners of war, but then, one has to learn to live with the irrational rhetoric of the Hurriyat leadership. The sentiments displayed by Mirwaiz have been echoed by the Peoples Democratic Party (PDP ), already quite upset due to the professed hijacking of their agenda of rehabilitation by the National Conference. While speaking on the idea of cross LOC travel, PDP spokesman Naeem Akthar has stated that, ““It was peoples’ initiative which was pushed forward by then Chief Minister Mufti Muhammad Sayeed in 2005. It was decided that hassles associated with the cross LoC travel will be removed with the passage of time. However, the initiative taken by then PDP led government has got stagnated.” These words leave no scope for speculation.

All said and done, there is a definite linkage between the demand for easing entry rules along the LOC, the failure of the surrender and rehabilitation policy to take off, the desperation of the “stranded ex-militants” to return and the plan of the Jihadi organisations to up the ante in Kashmir. There are some strong lobbies which have identified a weakness in the rehabilitation process and are now working overtime to exploit the same. There is a very firm plan in place to create loopholes in the system by encouraging the people across to take law in their own hands.

The yearning of these wannabe militants and drifters to shed the path of violence and return to the mainstream highlights the fallacies of the ongoing separatist movement in Kashmir. The change in heart of the core group of indoctrinated youth is a clear indicator that the politics of division being followed by a selective few have not yielded positive results and now a reverse movement is on the cards. To this extent, the Hurriyat and its umbrella organisations stand exposed and their silly insinuations need not be taken seriously.

The PDP has raised this issue on several earlier occasions in the State Legislative Assembly and other forums. It has consistently accused the government of putting the matter in cold storage. The government, on its part, needs to stay strong with its conviction that it is doing the best possible to help the stranded people, but, it can go only this far and no more. At the end of it all, the writ of the state and security of the people is of paramount importance.

It has to be ensured that those benefitting from the policy come in through legal means that are being worked out between the governments of India and Pakistan. The policy cannot be extended to those infiltrating through the line of control or following the Nepal-Bangladesh route to get back. A robust policy of retaliation against those who misuse this facility is very necessary.