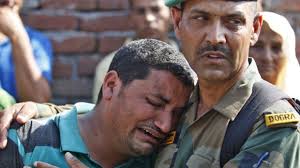 Newspapers and television channels in India and Pakistan are having a field day of late in narrating multiple angles of the recent terrorist strike in Pathankot, Panjab. Views are being articulated in scintillating and creative prose with coining of new phrases by the hour.

In fact, terror and violence are two subjects that have been drawing an unending media presence of late! Defence analysts have not completed one article when material for writing the next is ready and available. Ceasefire violations, infiltration bids, routine terrorist initiated violence in Kashmir, the more high profile attacks like the one in Pathankot, recruitment of local youth as terrorists, Dawood Ibrahim-sponsored terrorist sleeper cells in the Indian heartland, the endless diatribe of so-called human rights organisations, all of these and more, overflow the editorial baskets of newspapers large and small, while keeping the guest coordination in television news channels on its toes all the time.

Nobody in the midst of this madness is ready to pause and think objectively as to where all this is leading! No sensitivity is accorded to the fact that, “We are dealing with the lives of human beings.” No thought is given to normal civility while the dance of death is being played out in the media in the aftermath of terrorist violence?

Volumes have already been said and written about the Pathankot terror attack. This columnist would like to challenge all the “experts in the field”, the editors on newspaper desks, the anchors in the newsrooms, the spokespersons of political parties and the venerable defence and security analysts  to reveal the names, without a pause, of all the brave soldiers who lost their lives in the operation. One would not like to go so far as to ask for details like their place of residence and family etc.

This is an open appeal to all worthy luminaries mentioned above and the public in general to try and remember the names of the martyrs and if unable to do so, then indulge in some serious introspection!

In fact, not many in India are aware that while the Pathankot attack is being discussed threadbare, the country has been assaulted in Afghanistan yet again. The attack being referred to was launched against the Indian consulate in Mazar-e-Sharif in Northern Afghanistan. It led to the death of one policeman and injuries to eleven others. Is it not incumbent for the nation to spare a moment for the policeman who moved to foreign shores to serve the country and has paid for his loyalty with his life?

And what of the terrorist killed? There is not a word coming out about their native places in Pakistan and the families that they have left behind. These misguided young boys and victims of indoctrination at the hands of evil forces with vested interests have, by now, been reduced to nothing more than a number in data bases. They have been consigned to the figures that Indian and Pakistani diplomats and media need for the endless discussion and meetings that maintain their relevance.

It is not even known whether their dead bodies of the terrorists have been given the dignity of last rites, and if so, where! Not that anybody cares. And the poor blokes lost their lives due to a conviction that they were doing a great path-breaking job that would do them, their families and most of al –  their religion proud.

How long is this game of chess with live pawns going to go on in the subcontinent, and who, if anyone, has the stature to put an end to it?

Is it possible for authorities in Pakistan, who love to stage such events, to realise that their latest jamboree in Pathankot has not made an iota of difference in India.  The sleepy town has not even risen from its slumber due to an incident that was meant to create historic waves.

It is business as usual over there, children going to school while the men and women attend to the work of the day. The old and retired fraternity, of course, has got a topic to engage in and remain occupied with for many days, as do the chatterati in Delhi and Islamabad. They will stay engaged only till the next big breaking news is aired by television channels.

Life, however, has changed forever for a few families on both sides of the international border who will keep convincing themselves that their loved ones did not die in vain. With time, they will realise that they are fighting a losing battle in the nurturing of this conviction. The futility of it all will strike sooner than later and bring with it both sorrow and frustration. Whether soldier or terrorist when alive it is only a human being who dies and with him are attached the memories of so many people.

It is time for the civilised voices in both India and Pakistan to seize the political narrative and guide it on to a saner path, away from the mindless violence that is today considered to be “normal.”

Prime Minister Narendra Modi has consistently attempted to strengthen the political stature of his Pakistani counterpart, Prime Minister Nawaz Sharif. It is now up to the latter to leverage the support to control evil forces in his country that are hell bent upon keeping both countries embroiled in an endless cycle of violence.

The two nations, their people and their all important media also need to concentrate more on the humane aspects rather than the sensationalist copy that incidents of violence provide. This applies specially to the electronic media domain. A few terror attacks will not jeopardise the security of a country as strong as India, but, they have an element of brutality in them which needs to be exposed.

It is hoped that terrorism will be looked upon with a humane perspective in the future so that the fight against it moves along a just and righteous plane.

(Jaibans Singh is a columnist and defence analyst)