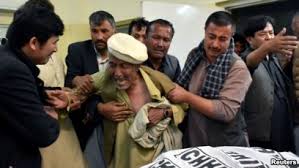 “You know and I know the ‘War Politics’ that are being played out against the Hazara community in Balochistan. The eighth largest Army in the world and a nuclear power is deployed in every street of the Province in combat fatigues, still terrorists strike at will, so where is the state, does anybody have an answer? You are Baloch, where is your self respect? Policemen have been killed; have you ever caught even one killer of such policemen? You will cremate them at 4 PM, give two lakh rupees, speak of Allah giving them peace and the matter will finish. All this will stop only when the government wants it to stop, this is war politics and we are being treated as sacrificial lambs, this is the truth and I have said to the Army Chief too, I told him our killing is not a matter of Islam, you are responsible for it.” These are the chilling words of a local Hazara leader to the Home Minister of Balochistan, Mir Zia Ullah Langau, post the terrorist attack at Quetta on 12 April 2019.

At least 20 people are reported killed and forty wounded in the attack, which was in the form of a bomb explosion at an open market in Quetta, the capital city of Balochistan. The market is being run by the Shiite Hazara community which evidently suffered the maximum casualties, also killed were personnel of the Police/paramilitary and some others. The terrorist organisation Lashkar-e-Jhangvi and Islamic State of Iraq and the Levant (ISIL) have claimed responsibility for the attack.

The situation in Balochistan has been grave since early years of the last decade. In the last couple of years the situation has further deteriorated. Some Pakistani commentators have expressed a rather concerned view that the area beyond Parachinar has gone out of government control all together.

According to government data as quoted by Al Jazeera, since 2013, more than 509 Shia Muslims, mainly ethnic Hazaras’, have been killed in a campaign of targeted shootings and bombings in Balochistan. The Hazaras’ live in a state of terror and perpetual insecurity. Even to purchase essentials they have to go to the market under security cover provided by the government. In this instance too they had gone to the market with security, which accounts for the killing of the paramilitary soldier who was on duty.

Balochistan, the most restive province of Pakistan, has been in the throes of unfettered violence for many years now.  A suicide bombing on October, 5, 2017, at Fatehpur Dargah (shrine) in the Jhal Magsi area of the province led to the death of more than 20 innocent people with many injured. The explosion took place at the entrance to the Dargah at a time when scores of people had gathered to pay their respects. ISIL took responsibility for that strike too. Also In October, 2017, unidentified gunmen opened fire on a security van bound for the fruit and vegetable market killing the driver and four others.

The violence against the Hazaras community in Balochistan by extremist organisations is perpetrated at the behest of the strong Sunni powers across the globe. The subsequent retaliation by Shia groups has made the province a battle ground for Middle East’s Shia-Sunni tussle. The Pashtu-Hazara historic rift is being exploited to perpetuate violence against the Hazaras with the objective of “disciplining’ them. This sectarian violence suits Pakistan since it can engineer a demographic change to reduce the hold of the Baloch people on the province.

Balochistan is ethnically the most diverse province of Pakistan. It is home to Baloch, Hazaras, Sikhs, Hindus, Parsees and an array of Sunni adherents. The importance of this ethnic diversity also lies in the spread of the communities across the border towards Afghanistan and Iran. The Baloch took arms against Islamabad in 1971 after the debacle in East Pakistan which led to the creation of Bangladesh. The uprising was crushed brutally and hundreds of thousands of Afghan refugees were permitted to settle over there with the intention of changing the demographic profile of the region. The region has been suffering unmitigated violence ever since.

Balochistan is today the most impoverished and backward province of Pakistan despite nature having provided to it a huge bounty of natural resources. The area contains copper, uranium, gold, coal, silver, and platinum deposits. In addition, about 36% of Pakistan’s total gas production comes from Balochistan; astonishingly, only 17% is consumed domestically while the rest is transferred to other parts of Pakistan, mainly Sindh and Punjab. Most of the mining is being done by Chinese firms with Chinese manpower and the proceeds are going to the federal government. The Baloch people should have been the richest people of Pakistan; they are the poorest because of crass colonisation which is a big reason behind the ongoing revolt. Balochistan is the key to the ambitious China Pakistan Economic Corridor (CPEC).

Inputs regarding atrocities being committed on innocent civilians by the Pakistan Army and its sponsored terrorists are coming out frequently despite an attempt to keep the province under wraps. The statement of the Baloch Hazara activist recorded on video is a clear indictment of the Government of Pakistan and the Pakistan Army.

This struggle for independence is being blamed upon India, the US and Israel. What is being conveniently forgotten is that the people are fighting for their rights in the face of blatant economic exploitation similar to the one that led to the severing of East Pakistan (Now Bangladesh) from West Pakistan. Pakistanis whose heart bleeds for imaginary atrocities on Kashmiri are not showing any sensitivity towards its own nationals. This morally ambivalent situation is untenable and the world needs to take cognisance of the same. India has been speaking up in favour of the Baloch independence movement. Prime Minister Narendra Modi set the pace with his speech from the ramparts of the Red Fort on Independence Day, 2016. The forward movement from there on, sadly, has been slow and laggard. India needs to maintain and sustain momentum in order to provide much needed relief to the impoverished people of Balochistan who are being physically and emotionally suppressed by an insensitive and self serving state apparatus.

(Dr. Simrit Kahlon is an academician and expert in Geo-Political affairs)