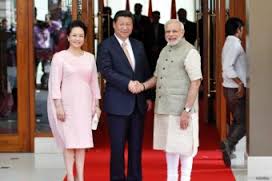 “China and India are two bodies, one spirit”, said Prime Minister Narendra Modi while unleashing his famous charm offensive on Chinese President Xi Jinping and his wife. That the visiting dignitaries were taken in by the Indian hospitality could be seen by their relaxed behaviour as they went through the motions of the state visit.

It was widely perceived that the Chinese President would look for a pie in the projected growth story of the India and would also attempt to put a check on the Indian drift towards Japan. It was also felt that Prime Minster Modi, on his part, would lobby for Chinese assistance in build up of infrastructure in India and a boost for the manufacturing sector so important for realisation of his dream of accelerating growth in the country.

The Chinese incursion in Chumar, Ladakh, while the visit was on, spoiled the party for the two leaders and what was predicted to be a path breaking meeting culminated as a mere whimper. The $20 Billion promise for infrastructure development fell rather short of the expected $100 billion. China did not even attempt to cross the Japanese threshold of $35 Billion in aid to India. If China is bothered by the growing Indo- Japanese ties its President did a good job in hiding his anxiety.

The questions that is rankling everybody are – Why did President XI Jinping allow such a insignificant, insipid incident to come in the way of what could have been the biggest success in relations between the two countries in decades? Could President Xi Jinping have stalled the incursions and given the visit the desired fillip? Is the Peoples Liberation Army of China dictating border management and even foreign policy when it comes to India?

It is well known that President Xi Jinping is firmly in control of the military establishment of his country. Therefore, what happened on the line of actual control in Chumar was probably with his knowledge and consent. .

The bottom line that emerges is that the Chinese President does not want relations between the two countries to develop beyond beyond a point. He wanted to leave a clear message that the border dispute is very real and very potent and it cannot be sidelined with talk of trade and commerce. He wanted to establish that when India talks to Japan or the US she is talking to countries that she does not share a border with; in the case of China there is dimension of physical proximity that changes all equations.

It is quite evident that the visit has fallen wholly short of expectations. President Xi Jinping has dangled a carrot and gone back. The $20 Billion economic agreement over five years is a pittance; one does not know whether the industrial parks will come up in Gujarat and Maharashtra or get embroiled in the famous Indian land acquisition process. What China wants to teach us about the railways could have been learnt from Japan and South Korea also; in any case we have enough talent in India to work things out ourselves. We fought a war after becoming brothers in the “Hindi Chinni Bhai Bhai” Nehruvian era; one wonders where this “sister city-sister province” era will lead us to.

The relations between the two countries are likely to remain at a status quo. If the visit presented a unique opportunity for China to effectively engage India in a trade and security partnership, as was being projected by many China experts, then President Xi Jinping has preferred not to avail of the opportunity.

There is no reason to be dismayed. If India has not gained anything it has also not lost anything. The situation has, in fact, provided an opportunity to revisit the contours of the relationship with China. India needs to come up with some innovative, out-of-the-box, ideas to deal with the circumstances. India needs to move forward with the realisation that the border tensions will remain and so will the trade deficit.

The incursions along the line of actual control are, by themselves, silly theatrics by China. The Chinese play out a drama for some time and then retreat. Sometimes tell tale items are left back, sometimes troops stand in front of each other without using their hands; sometimes tents are pitched, sometimes aircraft and helicopters overfly. This time the war was fought with banners – of all things. Any sane person would look at such proceedings as a downright insult to the intellect of a “great civilisation.”

There is, however, a method to this madness. China is well aware of the discomfiture that these mindless exercises cause to the Indian leadership. The media, and through it the people of the country, look at the leadership as being weak and ineffectual. The UPA alliance suffered due to this, now the NDA is in the same boat. In China there is gleeful enjoyment of the proceedings.

To turn tables, a good beginning would be for the media to make fun of the stupid antics by the Chinese rather than pressurising Indian leaders and army personnel.  China is very conscious of its image, when the world starts poking fun at the proceedings they will automatically stop.

It would be best   to implement a nationalist approach to reduce the trade gap. Indians must desist from purchasing Chinese goods. In any case the electronic goods are cheap imitations with short life spans and no guarantees causing more expenditure in the longer run. Smaller Indian made idols of Gods will be more pure and better suited than the Chinese alternatives; how do we know what impure ingredients the Chinese models are made of?

It is time to realise that India is being pushed to the wall by China both strategically and economically and that the balance can be changed only by a clear cut, nationalist policy. The bottom line should be the knowledge that China understands only the language of power.