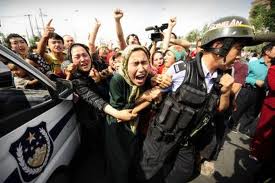 The restive Xinjiang province in China has been in the throes of violent incidents for the past one month or so. In the most recent incidents, about 20 people have reportedly been killed by members of the minority Uighur community in what is being termed as ‘terrorist attacks”. In yet another incident, about a week ago, rioters stormed a police station in Hotan; the assault left 18 people dead. The perpetrators of these violent incidents are said to have used knives and explosives, including grenades, leading to speculation that they had been imparted professional training to carry out such attacks.

In an interesting development China has, in the wake of these attacks, openly accused its most enduring ally, Pakistan, for having provided a safe haven for training of these “terrorists’ in its North-West Frontier Province (NWFP) and the Federally Administered Tribal Areas (FATA). “The heads of the group had learned skills of making explosives and firearms in overseas camps of the terrorist group East Turkistan Islamic Movement (ETIM) in Pakistan before entering Xinjiang,” says an online statement of the Kashgar authorities of Xinjiang province. A province could not have come up with a statement of this nature without the consent of the central leadership, especially so, at a time when Shuja Pasha, the Chief of the Pakistani spy agency, ISI, was on a visit to Beijing with discussions on the rising violence by Uighur separatists in Xinjiang as part of his agenda.

This is not the first time that Pakistan’s involvement in the so-called insurgency in China has come to the lime light. Earlier in 2004, Uighurs were suspected of involvement in explosions and killing of Chinese engineers in Gwadar, Balochistan and also in the kidnapping of two Chinese engineers in South Waziristan. The then President of Pakistan, Pervez Musharraf, had somehow placated the Chinese and mounted special operations to smoke out Chechens, Uzbeks and Uighurs operating in NWFP and FATA. However, the exercise did not produce any significant results, either by design or default.

The Uighurs, an ethnically Turkic group of Muslims of the formerly independent Republic of East Turkistan, which is presently under China’s control and is called the Xinjiang Uighur Autonomous Region (XUAR) are unhappy under Chinese rule. The latest Chinese census gives the present population of the Uighurs as slightly over six million. In order to demographically engineer XUAR, millions of Han Chinese have been settled over there since 1949. Before 1949, there were only 300,000 Chinese settlers in Eastern Turkestan, now there are more than six million.

The freedom movement gained momentum since the early 1990’s. The Chinese authorities reaced with large scale arrests and summary executions. In 1998, the National People’s Congress passed a new criminal law that redefined “counter-revolutionary” crimes to be “crimes against the state”, liable with severe prison terms and even execution. Many restrictions on religion like forbidding parents and guardians to allow minors to engage in religious activity, which were not found elsewhere in China were imposed in XUAR. Due to this restrictive crack down, the decade from 1998 to 2008 witnessed zero Uighur related violence, but eruptions have become common since 2009.

China has, for long, pointed a finger at ETIM for instigating its Uighur population towards violence. ETIM is said to have links with al Qaeda and other terrorist organisations and has sent people to train and fight in Pakistan and Afghanistan. The stated goal of the organisation is the independence of “East Turkestan” and the conversion of all Chinese people to Islam. In 1997, ETIM headquarters were moved to Kabul, under the shelter of the Taliban government. It was here that the Islamic Movement of Uzbekistan (IMU), which is now active in China, was coordinated with the activities of the al Queda. In 2006, ETIM circulated a video calling for a renewed jihad by taking advantage of the 2008 Olympics in Beijing to gain publicity for its attacks. The Chinese are convinced that ETIM is receiving funds from rogue elements of the ISI.This apart, the Mir Ali area of North Waziristan in FATA is said to be under the effective control of the IMU. Over here some 300 Chinese Muslims were said to be living and receiving training since 2008. This is what is leading to the diplomatic confrontation between the two countries.

Analysts feel that the recent stand-off is the result of Beijing’s unhappiness with Islamabad’s counter terrorism efforts. In a double quick reaction, the government of Pakistan has issued a statement pledging full cooperation with China against the East Turkestan group and expressing confidence that China would “succeed in frustrating evil designs of the terrorists, extremists and separatists.” It is believed that earlier visits by Pakistani intelligence officials and the recent visit by Shuja Pasha are part of the overall policy to reassure the Chinese of Pakistan’s commitment to weed out Uighur separatists from its territory. But the Chinese, who view Uighur separatist sentiment as a dire threat, have become increasingly concerned about Pakistan as a haven for radicals and are not quite convinced by the argument.

It is a well known fact that China rarely points a finger so directly and publicly at Pakistan. Pakistan has obtained huge benefits including nuclear assistance by utilising China’s fears of Islamic fundamentalism spilling over to its border. Nevertheless, there is considerable evidence to suggest that Pakistan-based militants have a role in the violence that is taking place in XUAR. China is not likely to take all this lying down for which reason a further deterioration of the situation in XUAR may well lead to a diplomatic impasse between the two countries.