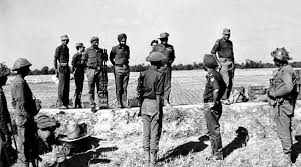 It is now nearing five decades since the great Indian victory in the Indo-Pakistan War, 1971. For the nation it is a distant memory with the generation that witnessed the fabulous feat going fast into oblivion. That it was a glorious victory, one of its kind in the annals of Indian Military history, cannot be denied.

Late Field Marshal Sam Mankeshaw, then Chief of Army Staff of the Indian Army, in the run up to the war, explained explicitly to his troops and to the people of India the righteousness of the action being taken in the larger cause of humanity. His words had an electrifying effect and his soldiers found unmitigated support from the entire country. This was a major factor for the resounding victory. While Pakistan was unsure and unconfident, India was high on morale and conviction. Field Marshal Sam Mankeshaw went on to become folklore for his extraordinary planning and conduct of the war.

Bangladesh, the nation that India carved out and then assisted in setting up as a vibrant democracy, is today thriving and well respected in the comity of nations. Its rapidly improving economy and enduring democracy are its biggest assets. Its relationship with India is on the stable and productive. This freedom was won with great sacrifice; the role of the Indian army is providing to the people of Bangladesh the fruits of democracy and freedom is remarkable.

On the western front, the war of 1971 witnessed many battles where the Indian soldiers exhibited courage and fortitude in the face of great odds and came out victorious. Primary among the battles fought in this sector is the Battle of Longewala. This was the first major engagement wherein the enemy launched a massive assault with Tanks and Infantry, but was foiled due to the resilient defense by  a small contingent of 23 Punjab led by Major (later Brigadier) Kuldip Singh Chandpuri. The enemy, despite overwhelming strength, could not break the defense of this small force and, on the next day, was handed a devastating attrition in the hands of the Indian Air Force. The fate of the war in the western sector was decided there and then in favour of India.

The exploits of Brigadier Kuldip Singh Chandpuri and his men have been portrayed cinematically in an epic Indian movie “Border” which does not fail to bring tears of pride in the eyes of every Indian. Brigadier Chandpuri breathed his last in November, 2018 at the age of 78. He will always be remembered as a true son of India.

The conduct of the war was a true example of the synergized efforts of the Government and the Armed Forces with complete support of the people of the country. It was the support of the Nation that served as an elixir for the soldiers to attain the historic success.

It was in the aftermath of the war and due to the ignominious defeat suffered by Pakistan that the evil policy to “bleeding India with a thousand cuts” was formulated by the Pakistani Dictator, General Zia-ul-Haq. The basis of the policy lies in the conviction that Pakistan cannot beat India in a conventional war, so the best option is to resort to a Proxy War designed to weaken the fabric of Indian constitutional democracy from within.

Jammu and Kashmir, particularly the Kashmir Valley, was chosen as the main battlefield for application of this policy. The porous borders were used to infiltrate brutal mercenaries who spread terrorism and inflicted tremendous atrocities on poor, innocent civilians. The Kashmir Pundit community was forced to leave their home and hearth in Kashmir at the point of the gun.

The policy has caused terrible misery to the people of the region over many decades but it has not been able to break their will or their determination to remain with the democratic values of their country – India. They have, with complete support of the Indian Army and other security forces, defeated the evil intentions of the enemy. The enemy, however, is relentless in pursuit of his evil agenda despite not attaining even the minutest degree of success.

The recent legislation to bifurcate the state into two Union Territories as also the legislation diluting Article 370 and Article 35A into redundancy are already showing positive results. Those who had predicted a blood bath in the wake of such an action, despite its righteousness, stand exposed as liars since the region has witnessed no upheaval whatsoever. The international community has also supported the move as one taken within the ambit of the Indian Constitution and thus being an internal affair of the country. All efforts by Pakistan to internationalise the issue have failed.

The newly formed Union Territory of Jammu and Kashmir and the Union Territory of Ladakh are  now poised to reap the fruits of their new dispensation that will not only ensure complete integration with India but will also bring with it unprecedented economic benefits,

It is hoped that Pakistan and its stooges will read the writing on the wall and understand that it cannot break the fabric of India by any means, fair or foul. No kind of warfare – be it conventional, proxy, asymmetric, kinetic, hybrid or anything else can fructify the evil, fundamentalist ambitions of some self serving powers based in Pakistan. The Indian Army is too strong for Pakistan to contend with and will defeat all evil intentions convincingly.

Sadly, the great victory of 1971 is all but forgotten. As the ”Vijay Diwas,” (Victory Day) approaches on December, 16, one can expect wreath laying by a few politicians, a few memorial lectures and seminars and then it will be business as usual for the country. The most important aspect of telling the younger generation as to how their elders fought to secure their future and successfully carved out a new nation is something that is consistently been ignored. It is hoped that some attention will be paid to this very significant aspect of nation building

(Jasbir Sarai is a veteran of the Indo-Pakistan War, 1971)