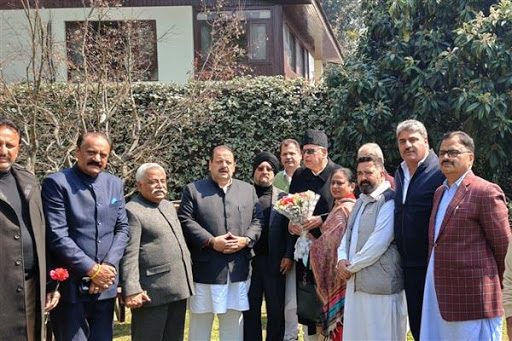 The Union Territory of Jammu and Kashmir has witnessed a series of restrictions since 5, August, 2019 post the bill to carry out the reorganisation of the state was passed by the Indian Parliament. Significant among these was detention of the political leadership.

As the situation stabilised, junior leaders of all parties were released in a graduated manner. The senior leadership, comprising mainly of the three previous chief ministers of the state, namely, Farooq Abdulla, Omar Abdullah and Mehbooba Mufti, continued to be detained under the Public Safety Act.

As the security situation remained steady, due to a firm control by the security forces on attempts by inimical forces to raise the threshold of terrorism and disruption, the Government, most creditably, set in motion the next prong of its plan to restore democratic norms in the region.

The plan has witnessed great momentum in the last few weeks. Certain actions indicate the roadmap charted out by the Government. The first among these is constitution of the Delimitation Commission on 06, March. The second is giving necessary sanctions for formation of a new regional political party named Jammu Kashmir Apni Party (JKAP) On 7, March. The most recent is the release of Farooq Abdullah from detention on 14, March.

The Delimitation Commission headed by former Supreme Court judge, Ranjana Prakash Desai, will redraw Lok Sabha and Assembly constituencies of the Union Territory and pave the way for holding elections to the Union Territory Legislature. It is the first step towards integrating the region into the rich democratic fabric of the country.

The decision of some Kashmir based leaders to float a new party indicates a desire to fill in the political space.  It is true that JKAP, as it stands, is represented by the old, senior political leadership of the region and looks like “old wine in new bottle.”  What is significant here is that the there is an attempt to move away from political domination by family led, feudal entities. It is hoped that, with time, a new and young leadership will also emerge and lead the region along the desired path of development and stability.

Prime Minister Narendra Modi has met a 24-member delegation of the Syed Altaf Bukhari led JKAP at his residence in 14, March. The meeting lasted for one hour and forty minutes. The prime minister called for “Jan Bhaagidhari” (people’s participation) in transforming the Union Territory and underlined that the government will work with all sections of the population to realise the aspiration of statehood for Jammu and Kashmir. The prime minister also assured the delegates that his government will address all the apprehensions related to domicile rights, education, jobs and business and that under no circumstances would the demographic pattern of the state be jeopardised. Similar assurances were also given to the delegates by Home Minister Amit Shah during their meeting with him. By giving a boost to the fledgling JKAP in this manner the prime minister has risen above party lines to ensure that the democratic process in the Union Territory gains firm roots.

The release of Farooq Abdullah has also come as a big boost to the political environment of the region. “I am free… I hope others political leaders would be released soon. I thank all parliamentarians who fought for my freedom. I will be able to take a decision on the future only after other leaders are released,” he said after his release. True to his word, Abdullah has made no political statement since his release, even as his party, National Conference, has stated that the release of its patron from detention was the right step towards restoration of a genuine political process in Jammu and Kashmir.

It is evident from the foregoing that political process in Jammu and Kashmir is rolling in right earnest and any perceived road blocks, if any, will be removed shortly. What is of importance now is to ensure that the enemy does not get any opportunity to reverse the process. This is a big challenge since there are many, as yet, who have a vested interest in supporting Pakistan in its nefarious designs. They will definitely attempt to cause social disruption by increasing acts of violence and stone pelting etc. The opening up of the weather is also to their advantage.

The terror machinery has been marginalised to a great extent but it still holds the potential to engineer some big strike or carry out a few smaller ones. Pakistan is working overtime to boost the terrorist strength in the Valley and will leave no stone unturned to cause harm and break the forwards movement. The Army has, in an incisive operation, killed four terrorists affiliated with the Pakistani terror organisation, Lashkar-e-Toiba, even as this article is being penned. Undoubtedly, the pressure will continue.

It can be said with a fair degree of confidence that things in Jammu and Kashmir are moving in the right direction. It is very clear that the central Government will leave no stone unturned in ensuring that vibrant democracy becomes a cornerstone of politics in J&K. While the security forces, led by the Indian army, will do whatever is required to keep the environment safe for progression of political and social activity, the political leadership and civil society also needs to take responsibility of ensuring that the enemy does not get to fructify his evil designs. A great result will definitely be the outcome of such joint effort.