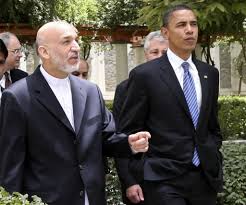 The United States of America (US) entered Afghanistan to avenge the 9/11 attacks in 2001 and along with western coalition forces waged a war on terror in the country. After 12 years, the terror still prevails but the US led coalition forces are looking for a safe exit from what has become a virtual volcano ready to engulf the entire region. Once the US and coalition forces leave Afghanistan, the Taliban militants will be free to wage a war against India, especially in Kashmir where their sympathisers are waiting to lend a helping hand.

Superficially, the US led coalition forces achieved the goal of the war on terror on May 2, 2012, when the US SEAL gunned down Al Qaeda Chief, Osama Bin Laden, in his Abbottabad hideout in Pakistan. However, the operation can be considered complete only when the Taliban is defeated on ground and Pakistan’s double game is thwarted. The situation is nowhere near such a happy ending.  This is the reason that is prompting US into pressurizing the Afghanistan government and the Taliban to engage each other in peace talks. President Obama feels that peace talks with the Taliban will go somewhere towards ending the war.

With his back against the wall, Afghanistan President Hamid Karzai constituted the Afghan High Peace Council in 2010 to negotiate peace with the Taliban. Till date, the Taliban have killed three senior members of the council since its inception, including its chief Burhannudin Rabbani. Moreover, the council at the time of its inception faced opposition from Afghan civil society that objected the inclusion of former militants in the Council.

Recently, the Taliban opened an office in Doha, Qatar, and put up their flag and a sign calling themselves the Islamic Emirate of Afghanistan as if they were a separate country and this was the Embassy of that country. This prompted Karzai to not only withdraw from the talks but suspend negotiations with the United States over a vital security pact, the Bilateral Security Agreement. In a nutshell, it is unlikely that the Afghan Peace Council will achieve success in the near future. Karzai also seems to be confused. He has been pressing Pakistan to release Afghan Taliban leaders in a hope to win the trust of Taliban fighters to such an extent that they shun terror and become democratic. Unfortunately, this dream is akin to meeting of North Pole and South Pole!

The Taliban are still giving nightmares to the US and Karzai governments. Experts believe the Afghan Taliban have not become weak because they enjoy strong support from radical elements in the Pakistani establishment. The US has also often questioned the Pakistani will to fight the war on terror. On the one hand, Islamabad has remained an ‘important ally of the US in the war on terror’, and on the other hand, it has been nurturing terror infrastructure in Pakistan and Afghanistan to milk the US as and when required. Pakistan, in fact, wants Taliban to remain strong in Afghanistan even if ‘cosmetic’ peace is brokered between the Taliban and the Afghan government.

Pakistan has separated the violently anti-state TTP from other militants groups who do not pose an immediate threat to the State. It has also supported groups like the Haqqani network, the Afghan Taliban and Lashkar-e-Toiba (LeT). Pakistan’s strategy of “strategic depth” in Afghanistan, its policy of using militant groups to wage a proxy war in Kashmir, and the nexus of political parties and sectarian groups in the country all remain serious issues for the international community.

By being unfaithful to the US, Pakistan has managed to remain faithful to China. China is encouraging Islamabad’s nefarious anti-India designs, and her temporary friend, the US, is not directly discouraging her. Pakistan has been investing a major chunk of ‘fee of war on terror’ to unleash terror in India, particularly in Kashmir.

Pakistan sees India’s expansive diplomacy in Afghanistan as a ploy to disrupt it from the rear as it battles its own deadly Islamist militancy and separatist forces. Vying for influence in a post-2014 Afghanistan, it worries about India’s assistance to the Afghan army, heightening a sense of encirclement.

The recent misdeeds of Pakistan along the Line of Control (LoC) portend that that the new campaign by Islamic militants may already be underway in Jammu and Kashmir. According to the South Asia Terrorism Portal, in the first eight months of this year, 103 casualties in militant-related violence were recorded in Kashmir, compared to 57 in the same period of 2012. LeT leaders have recently told Reuters that they are preparing to take the fight to India once again, this time across the region. LeT is fighting Indian interests in Afghanistan as well, a senior LeT source in Pakistan told Reuters: “It is correct that the LeT cooperates with the Afghan Taliban (insurgents) when there is a question of attacking Indian interests.”

Hafiz Saeed, founder of the LeT, has left no doubt that Kashmir will become a target, telling an Indian weekly recently: “Full-scale armed Jihad (holy war) will begin soon in Kashmir after American forces withdraw from Afghanistan.” It has to be kept in mind that the retreat of Soviet forces from Afghanistan in 1989 brought a wave of guerrillas into Kashmir to fight India’s rule there.

It can be safely concluded that presence of the US in Afghanistan suits India’s interests in Afghanistan as well as in Kashmir. Considering the proximity between China and Pakistan, the US cannot afford to pack it’s bag and simply move out of the strategically critical AfPak region. The good news is that the US has never categorically said that all of its troops will be withdrawn from Afghanistan by 2014. Washington very well knows how Afghan Taliban, whom it once nurtured, wreaked mayhem in Afghanistan after withdrawal of the Soviet Union; it will not want a repeat of that horrific scenario!!