As General Qamar Bajwa, the all powerful chief of the Pakistan Army, prepares to drift into retirement and ignominy, he would be ruing the day he decided to place all his political eggs in the basket of Imran Khan and his political party, the Tehreek-e-Insaaf (TeI).

The concept was in line with the thought process of “The Establishment” (Pakistan Army)  to transfer all responsibility to a weak and pliable political entity while keeping all authority with itself. From experience, General Bajwa had noted that big leaders like the Bhutto’s and Nawaz Sharif could be controlled only to an extent and were quite prone to showing their claws from time to time. Such a situation was considered to be unsuitable, he therefore homed in on Imran Khan and hoisted him at the helm through a rigged election in mid-2018. What Bajwa had not contended for was the complete lack of acumen and ineptness of Khan.

The biggest impact was felt in the crucial domain of foreign affairs. It is well known that  Pakistan survives on doles from the West, Middle East and China; it is perpetually looking for loans from West controlled financial institutions like the IMF, World Bank, Asian Development Bank etc. Khan has managed to annoy the West and the Middle East (including all weather friend Saudi Arabia). China too is quite frustrated but continues to hold Pakistan’s hand due to its own geo-political compulsions.

The Pakistan Army realised Khan’s political naivety and obtuseness in October 2019, when he was called upon to build world opinion against the constitutional changes in the status of Jammu and Kashmir brought about by the Indian parliament. Imran, at the behest of the Pakistan Army, left no stone unturned to raise the issue with US President Donald Trump, UN Security Council, IOC, UNHRC and several countries, but all in vain. He also gave a nuclear threat to India but ended up being mocked. His diplomatic clumsiness was crowned by the disastrous speech in the United Nations General Assembly (UNGA), after which, he was  labelled as, “the first contemporary Muslim leader to exalt the cult of Jihad.” His haphazard diplomacy exposed him as a blubbering fool rather than a strong leader. The stunned Pakistan Army is now feeling helpless due to complete absence of support from the international community for Pakistan’s position on Kashmir.

On the economic front, the Financial Action Task Force’s (FATF) “Grey listing” of Pakistan is a ghost that simply refuses to go away. The lack of a coherent financial policy further accentuated by the COVID crisis has left Pakistan reeling. The stock market has crashed; credit ratings have plunged, inflation is unstoppable and unemployment is at a peak with even the educated getting desperate. Pakistan is presently grappling with a huge financial, food and health crisis apart from other issues.

Politically, Khan has been unable to break the backbone of the big political parties in Pakistan, as was mandated by his military masters. Instead, the parties have become stronger and are giving stiff opposition to the extent of stalling proceedings in the parliament.

Pakistani media is under constant pressure by both the Government and the Army but has exhibited commendable resilience. In this regard also Imran Khan has turned out to be a cropper in the eyes of “the establishment.” 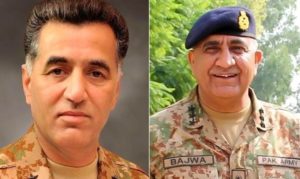 With the extended term of General Bajwa coming to an end, a power struggle is being played out within the Army. There are rumours of Bajwa attempting to stage a coup and becoming a Dictator. Fortunately for the country, he does not have the necessary support within the Army to take such a big step. This is another indication of his being viewed as a failure by his own people.

As the succession battle rages, General Bajwa has already put his cards on the table by appointing a Shia officer, Lt. General Azhar Abbas, as Chief of General Staff (CGS). This puts General Abbas well into the contention with the support of the outgoing chief. The other two contenders are Lt. General Faiz Hameed, chief of the notorious spy agency Inter services Intelligence (ISI) and the Rawalpindi Corps Commander, Lt. General Sahir Shamshad. Lt. General Faiz Hameed has now come into controversy with rumours of his having been shot by his wife and wounded in the process. Things are bound to get ugly and the new incumbent, after sitting on the chair, is bound to take a tough stand to build his credibility and stature.

The instability in Pakistan can have a direct and critical effect on India, particularly Kashmir, considering that the region remains the best conduit for diverting public attention from internal issues. A big indication of the emerging Pakistani thought process and strategy is the sudden spurt in targeting of civilians in Kashmir. Staging of spectacular terror attacks in Kashmir in the near future is well within the realm of possibility.

It is noteworthy that stability on the western border with Afghanistan has given the Pakistan Army and ISI leverage to concentrate on the Line of Control (LOC) with India. This has resulted in a spurt in infiltration attempts; Pakistan has created a new modus operandi of facilitating infiltration without breaking the ceasefire.

Pakistan has also put all its human assets and resources in Kashmir on to the task of increasing local recruitment by radicalising the youth. New boys are being identified to be given a leadership role, the idea is to create another set of Burhan Wani’s. They will be tasked to target innocent civilians with small arms like pistols and Grenades and then run away.  The Hurriyat is also being revived with more responsibility coming the way of Masarat Alam, the hard line successor of Syed Geelani.

The attempt by the Pakistani leadership to divert attention from internal instability of the country by increasing engagement in Kashmir is unlikely to fructify since the government, the security forces and, most importantly, the people of Kashmir are well aware of these evil designs and will not allow them to succeed. It is, however, very important to stay vigilant.