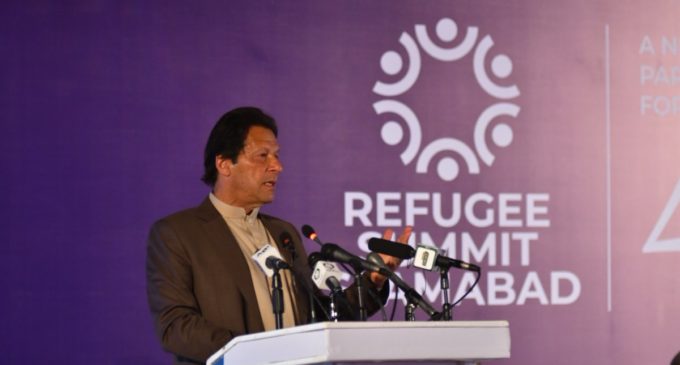 Imran Khan, Prime Minister of Pakistan, has sent out a warning to the world that his nation is facing an eminent refugee crisis on its eastern borders with India. “We are worried there not only could be a refugee crisis, we are worried it could lead to a conflict between two nuclear-armed countries,” Reuters quoted Khan as saying.  “Our country will not be able to accommodate more refugees,” he added while urging the world to, “step in now.”

This comes across as the most bizarre among all the outlandish statements targeting India that Imran Khan has made during his premiership.

Of late, the frequency of vitriolic statements by him has increased to an extent that he is possibly talking of nothing other than India and spewing the most disgusting and false venom with every word that he utters. It is so because of frustration at the world not taking any cognisance of his words and the fact that he is under terrible stress due to the possibility of his removal and imprisonment by the Pakistan Army. He feels that by targeting India all the time he can deflect the pressure from his own self.

This is not the first time that Imran Khan has made a statement about refugee influx from India. Earlier, in Mid-December 2019, he had said in an international forum that millions of Muslims living in India would be forced to leave as a result of the new Citizenship law enacted by the parliament of the country and the ongoing curfew in Kashmir. He termed the predicted catastrophe as, “a refugee crisis that would dwarf other crises.” At that stage also, he called upon the international community to “step in now.” “We in Pakistan are not just worried that there will be a refugee crisis. We are worried that this could lead to a conflict, a conflict between two nuclear-armed countries,” said Khan then too.

The constant repetitions make it apparent that Khan considers this line of thought as his best bet for India baiting in the international arena. He actually feels that he can influence the international community into moving against India with such pathetic half truths.  In the history of international politics and diplomacy there would be no example of a bigger double-speak no better example of “pot calling the kettle black.”

India has been compelled to bring out the amendments in its Citizenship Laws because the neighbouring Islamic countries have been unable to secure the right of the people of religious minorities residing there. These minorities are coming into India as refugees in large numbers and hence the need to look after their interests through proper legislation which has taken form of the Citizenship (Amendment) Act, 2019. The biggest influx of people of minority communities has been from Pakistan and continues to be so. Even as Imran Khan was making his obnoxious statement, Indian newspapers were carrying details of 50 Hindu families that have arrived from Pakistan on Sunday, 16, February, and are seeking refuge and citizenship in India. They have temporarily been accommodated in Gurdwara Majnu Ka Tilla in New Delhi.

Imran Khan also seems to have conveniently forgotten that his own uncle, General AAK Niazi, already holds a record so far as engineering of refugees is concerned. It was in his watch that millions were forced to flee East Pakistan (now Bangladesh) to India in 1970-71.

While refugees from Pakistan coming to India is very real problem with hundreds of thousands already settled here, what Imran Khan is trying to sell to the international community is a hypothesis, a supposition that has no precedent whatsoever.

The Kashmiris who went to Pakistan under the lure of so-called Jihad are leading a terrible life of penury there, and at great risk, they are taking the Nepal and Afghanistan route to come back to India along with their families. Under these circumstances who from Kashmir is likely to even think of going to Pakistan? Imran Khan himself says that the people of Kashmir are under being suppressed since the last 200 days, surely this was enough time for them to start the exodus to Pakistan should they have felt the need to do so, can he name even one person who has gone there? So far as the other Muslims of India are concerned, well, they will never leave India and never ever think of going to Pakistan. So, Imran Khan can rest easy, he will under no circumstances get an opportunity to show his administrative skills in management of refugees from India.

In fact, it is India that should be worried about an unprecedented refugee influx from Pakistan. There is a distinct possibility of an exodus towards India from Balochistan, Sindh, NWFP and Gilgit-Baltistan. That the Ahmedias, Shias, Hazaras, Balochs, Baltis and Pashtuns of Pakistan will also follow their fellow citizens of the Hindus, Sikhs, Christian, Buddhists and Jain communities to India is well within the realm of reality. These hapless citizens of Pakistan are suffering immensely under the yoke of the Punjabi dominant federal government and the Pakistan army. The reality is that if Imran were to open borders of his country even for an hour, half of Pakistan would get to India.  Indian Kashmir, on the other hand, is attaining one progressive milestone after the other after breaking down the shackles of a restrictive Pakistan driven leadership.

If Imran Khan were to give to the people of Balochistan, NWFP, Sindh and Gilgit-Baltistan even a fraction of what he demands for Kashmir from India all the time then his country would not be in the dilapidated state that it is. He is building castles in the air while his country looks towards him for much needed and much promised resurrection as “Naya Pakistan.” Instead of wasting his energy in futile talk Khan should start taking steps to ensure that his country protects its sovereignty and integrity that is severely threatened. #UnreliablePakistan need more than India bashing and India hallucination to come out of the quagmire that it is in presently.

(Author is a senior journalist, author and commentator)