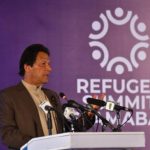 Onkareshwar Pandey Imran Khan, Prime Minister of Pakistan, has sent out a warning to the world that his nation is facing an eminent refugee crisis on its eastern borders with India. “We are worried there not only could be a refugee crisis, we are worried it could lead to a conflict between two nuclear-armed countries,” Reuters quoted Khan as saying.  “Our country will … END_OF_DOCUMENT_TOKEN_TO_BE_REPLACED