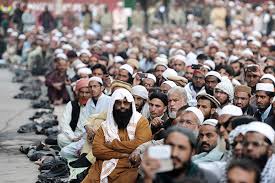 Muttahida Ulema Mahaz (MUM) is a sectarian political party of Pakistan that recently demonstrated against the Rawalpindi incident. Its delegates stated that the violence in Rawalpindi during the Ahshura procession was the result of a ‘conspiracy between India, America, Israel and imperialist forces.’ The comment is ludicrous and deserves to be ignored but for fact that it is part of the grand propagandist design being followed by Pakistan to malign India. MUM is one of the many sectarian, fundamentalist parties and organisations in Pakistan whose sole purpose is to stoke dissension in the name of religion. Such parties have dubious funding avenues and find a following amongst the rural population mainly because of their propagandist rabble rousing.

It is not only the fundamentalists who revel in anti-India propaganda of this nature, even a high standing political leader like the chairman of the Senate Standing Committee for Defence and Defence Production, Syed Mushahid Husain, has no compunction in stating openly that Indian agencies are ‘destabilising Pakistan through Afghanistan’ without giving a shred of evidence to prove his allegation. Earlier, when the line of control was heated up with constant and consistent ceasefire violations by the Pakistan Army and Rangers, the Pakistan parliament passed one of its many anti-India resolutions over what it termed as ‘unprovoked firing by the Indian Army’ leading to the death of innocent civilians and service personnel of Pakistan. This happened after Border Action Teams from Pakistan had blatantly entered Indian territories and killed and even beheaded Indian soldiers on a number of occasions.

This is the ugly face of the Pakistani propaganda machinery. Pakistan propaganda is aimed at denouncing India as a hegemonic aggressor in the sub-continent, the exploiter of religious minorities, the suppressor of freedom, the evil incarnate. Over the years, a well-coordinated multi-pronged propaganda machinery has been put in place for this purpose. The target is Pakistani children both school going and impoverished illiterates with the second category being given particular attention; the gullible common man (the poorer the better) who is made to forget his immediate misery with hate directed towards India and the international community from whom all kinds of support is solicited by spreading such misinformation.

The messengers are the political leadership, the intelligentsia and most of all the clergy supported by leaders of the many fundamentalist sects and organisations that have been allowed to mushroom with impunity across the country. The medium is school books and literature for the school going children; inter-personal communication through rallies and congregations for the masses; multi-media sources and international diplomatic channels for the upper crust. The various segments are fairly autonomous in nature but the end result is carefully assessed by a central authority of which the Pakistan Army and its infamous Inter Services Intelligence (ISI) is the most important constituent.

Kashmir is the favourite line adopted to portray India as the unscrupulous aggressor bent upon curtailing the freedom of a suppressed people. Such is the success of this campaign that many youth are attracted towards the call for Jihad given for the so-called liberation of their Muslim brethren in Kashmir. They are indoctrinated, cajoled and infiltrated across the border by the likes of Hafiz Saeed and Syed Sallahuddin. Once across they face an entirely different situation; they find the people whom they have come to liberate openly hostile towards them. With no place to hide since no local support is available they end up being hounded like rats. Thousands have lost their lives in this evil game. In the international arena the line taken is that it is India that is refusing to negotiate on long outstanding issues with respect to Kashmir and Siachen while keeping the line of control active. What India can achieve by keeping the line of control active and what is left to resolve in the Kashmir issue except for return of Indian territories illegally occupied by Pakistan and China is something that is left conveniently out of the reckoning. The line is fed to all those gullible enough to fall for it and render support preferably of the financial nature. Those who see through are summarily ignored. Fortunately, the numbers in the latter category are on the increase and the two faced propaganda no longer has the sheen that it had earlier. Sadly, there are still some countries especially in the Muslim world that continue to fall for this absurdity.

The second all weather theme is the persecution of the Muslim community in India; gross exaggeration is resorted to while speaking of the alleged problems that Muslims and other minorities are facing in India. The two faced propagandist monsters do not talk about their own backyard where ethnic cleansing of all minorities, even Muslims other than Sunnis (Shias, Ahmedias, Hazaras), is being carried out in a manner so barbaric that it has no parallels in the annals of history. The cultural and secular fabric established in this ancient land over millenniums is being sacrificed on the altar of fundamentalist thought quite alien to the land.

The propagandist list is very long and exhaustive but what emerges very clearly as that this propaganda is a tool being effectively used to hide the evil agenda in Pakistan itself. It is the mask used by elitist power centres in the country to retain control over the masses in a feudal manner. The objective is to draw away attention from their misdeeds. India is derided to project Pakistan as the most enduring bastion of Islam in the sub-continent because this is what ensures the unlimited flow of petro-dollars on which the high and mighty need to maintain their lavish life styles. The fact that this evil agenda is causing terrible suffering to the deprived and under privileged people of the country is of no concern. India is resisting the evil design admirably but now the time has come for the world to collectively put an end to this Machiavellian machination before untold damage is caused.