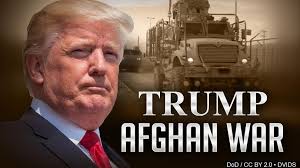 Among the many disasters that have marked the presidency of Donald Trump, his Afghanistan policy will stand out in history as the most catastrophic. Trump has, right from his campaign for the presidency, rooted for total withdrawal from Afghanistan. No issues with this, since America has realised the blunder that it committed in 2001 by entering Afghanistan and has been trying, since long, to find an honourable way out.  It is something that Barak Obama also desired but could not achieve.

The problem lies in the manner in which Trump is trying to implement his policy! Having already declared a massive troop reduction, he has opened talks with the Taliban without making the incumbent Government of Afghanistan a party to the same. This act, by itself, has caused a serious dent to the credibility of the Government of Afghanistan and made the situation in the trouble torn region even more fractious. It also constitutes a serious breach of trust by the US government which was instrumental in putting the government in place after throwing out the Taliban.

The US-Taliban talks are poised to enter the third round and the US special envoy, Zalmay Khalilzad, is speaking of a forward movement in the two main agenda points of a structured withdrawal of US forces and a commitment by Taliban to not allow safe haven to extremists in territories under its control. The negotiating team claims to be pushing for intra-Afghan talks but, quite obviously, the Taliban will be unwilling to agree to the same. A ceasefire and direct talks between the Taliban and the Government of Afghanistan with an outside moderator (that can be the US) is imperative to proceed further. Further, a reasonable troop presence will need to be maintained to ensure that the accord is implemented in full.

Once again, the complete lack of understanding of the US with regard to Afghanistan is quite visible. Everybody except the US knows that the latter has no means to ensure that the Taliban will honour its agreement. The Taliban is quite aware that the window for the US to seal the deal is closing down; it cannot be later than early 2020 to give Trump enough time to leverage the “military and diplomatic victory” for his re-election bid in November 2020. Safely ensconced in a position of strength it is playing out a waiting game knowing full well that US desperation will increase with each passing day and more concessions will be forthcoming. Taliban is also in direct talks with Russia, China and Iran to see what it can garner when the balloon goes up. Taliban may be talking of an “inclusive Afghan world” but their history does not refer to any such ideology. They have always believed in “all or nothing” with betrayal and violence being their forte!

Pakistan is playing the dual game that it is most adept at! It looks upon the development as an opportunity to regain the goodwill of the US and get the financial support that it so desperately wants. Ostensibly, it is pushing the Taliban towards talks but under wraps it will probably be advising the Taliban leaders to play the waiting game so that the US can be diplomatically bled by both entities. Once the US is out and the Taliban in control in Afghanistan, Pakistan will have the strategic partner against India that it so desperately needs.

The tragedy that is unfolding due to this inexcusable lack of strategic foresight of the US is that the unfortunate people of the region are staring at black days with imposition, once more, of the most medieval form of Sharia, replete with denial of any rights to the women, wanton killing, suppression and persecution. Those who supported the Government will be systematically put to death and a reign of terror will be unleashed across the land. In short, Afghanistan will once again stare at regression into the stone-age, from where it is just about coming out.

It is time for India to leverage her position as a global power and stand up for the Government and the people of Afghanistan who look upon the country as a friend in whom they have reposed faith and trust. On the diplomatic front, it is incumbent for India to create awareness internationally and pressure the US into looking at the issue from a strategic position and not as an election promise made by Donald Trump which needs to be honoured to facilitate his re-election.  India needs to clearly state its position of being fearful of a full-fledged civil war in case these parameters are not ensured.

At the regional level, India should fully support the legitimate Government in Afghanistan and expose the double speak of Pakistan.  Whatever help can be given to strengthen the Afghan Armed Forces should be forthcoming speedily and urgently. The Chabahar Port should be made functional soonest in order to boost the Afghan economy. Stability of Afghanistan should form part of bilateral dialogue with Russia, China, Iran and the Central Asian Republics.

Should India fail to contain the US blunder in the making, she will have to gear up for an intensely radicalised neighbourhood and its attendant effect on Kashmir and onwards the rest of the country. Jihad in Kashmir is bound to gain momentum, infiltration attempts will rise, the success in Afghanistan will be leveraged and psychological operations restructured to enhance recruitment of locals into the terrorist fold, availability of arms and ammunition will increase. Attempts will also be made to impact the rest of the country with radicalised Islamist ideology.

The security forces in Kashmir need to remain sensitive and vigilant of the emerging situation that will have far reaching ramifications. The bid to eradicate terrorism from Kashmir needs to be intensified in order to stop, on its tracks, the push that will come, yet again, from Pakistan. Clearly, there is much to be done and little time left for India to do the same. It is time to move decisively since procrastination will cause severe damage to both countries.

(Jaibans Singh is a strategic affairs analyst, columnist and author)