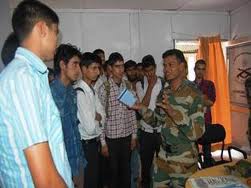 As Jammu and Kashmir moved on the road to normality, unemployment among the educated youth was identified as an area that required urgent attention. The Prime Minister Dr Manmohan Singh took personal interest in the matter and in 2010 he instituted an expert group under Mr C Rangaranjan, the former Governor of Reserve Bank of India, to suggest measures to enhance employment opportunities in Jammu and Kashmir by involving both the public and the private sectors. The committee found that youth of Jammu and Kashmir are not able to reap the benefits of the Nation’s economic development. They are not qualified to work with business houses that are opening their offices in the State or compete for jobs at the national level. The main reason for this was identified as lack of educational institutions imparting professional education that would equip the youth with the skill required for seeking gainful employment.

The expert group, after due deliberation, came up with the proposal to provide scholarships at the graduate and post graduate level to 5000 student of the State annually who had cleared the Board examination (Class XII). The students were free to select appropriate educational institutions outside the State for their further studies. The objective was to enhance the capacity of the youth to pursue quality career based education in the national mainstream.

The proposal got cabinet approval from the financial year 2011 when the Cabinet Committee on Economic Affairs approved a Special Scholarship Scheme for Jammu & Kashmir. The scheme has been implemented under aegis of Ministry of Human Resource Development (MHRD). The total outlay of the scheme is Rs.1200 crore for a period of five years. 4500 scholarships every year are reserved for general degree courses, 250 for engineering and 250 for medical studies. A wide range of graduate courses such as B- Pharma, BSC (Nursing), BSC(IT), BPT, integrated LLB , Integrated MBA , BCA , BBA, BHM etc are covered under this scheme. Every student gets up to Rs.30000/- per annum as tuition fees for general degree courses; Rs.1.25 lakh per annum for engineering degree and Rupees three lakh per annum for medical studies. In addition, hostel fees and incidentals are also given for all categories up to a ceiling of Rupees one lakh per annum. Students do not have to pay anything in advance; the fee is directly reimbursed to the college authorities after proper verification by AICTE/MHRD.

In Jammu and Kashmir many decades of living under the shadow of the gun has caused many setbacks with regard to mainstream life styles. The people are not fully aware of the nature of opportunities that are available for the within their own State let alone the Nation at large. The scholarship scheme launched in 2011, failed to take off in the initial stage due to lack of awareness of both the modalities and the system of getting admissions across India; during the first year, only 38 students could avail the benefits of the scheme.

The Army has always been the first to catch the pulse of the people in Jammu and Kashmir; in this instance also, it realised that the will to avail the opportunity was there but the wherewithal and knowledge was missing. In order to facilitate maximum exposure to career and job opportunities including admission prospects under the Special Scholarship Scheme the army instituted Youth Employment and Guidance Nodes (YEGN) across the State. The YEGN started providing all information that the youth would require for planning their future education and employment.

In order to optimise utilisation of all seats under the scholarship scheme the Army contacted several education institutions across the country where the youth could go to pursue education under the plan. One such institute where the army achieved excellent results was the Udaipur, Rajastan, based Pacific University. The University sponsored by the Pacific Academy of Higher Education & Research Society established in 1997 was formalized by a special legislation of the Rajasthan State Assembly. The society has established over 18 institutes including dental science, management, pharmacy, engineering, hotel management, education, arts, science, fashion technology, media & mass communication etc. It provides both graduate and post graduate level courses. Today, the group has a composite strength of more than 18,000 students, 700 faculty members and 1000 non-teaching staff. The campus is spread over an area of 100 acres. Major corporate houses of India annually recruit students from the university.

The Army has assisted as many as 584 students from Jammu and Kashmir to get admission in Pacific University in July/August, 2013; this includes of 535 boys and 49 girls. Assistance provided included proper documentation, admission, transportation where required and every other administrative detail right up to move from the State to reception at the University.

The far reaching vision of this excellent scheme orchestrated by none less that the Prime Minister of India needs to be understood and optimised. Exposing students of Jammu and Kashmir to quality education available in the country will not only improve their employability but also motivate their kith and kin to empower themselves through knowledge. It is the most apt forum to encourage national integration and harmonise the long suffering communities with the fruits if democracy and progress obtainable in resurgent India. There is no doubt that, if successful, it will get an extension on completion of the initial period of five years. The Army has set the pace for obtaining maximum benefit from the scheme. The civil society and non government organisations in Jammu and Kashmir should join hands with the Army to ensure that the visionary scheme reaps optimum benefits.