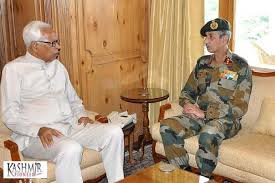 Tosa Maidan is a meadow in the Budgam district of the Kashmir valley. The area was leased to the Indian Army in 1964 for use as a firing range; the lease has been extended a few times since then. Expiry of the lease on April, 18, 2014, could not have come by at a better time for the divisive forces. It has given to them adequate ammunition for their campaign to discredit the Indian army at a time when the sensitive state of Jammu and Kashmir has witnessed successful conduct of the parliamentary elections and is gearing up for the assembly elections slated for the year end.

The issue is being politicised to the hilt. Wild allegation are being made to whip up passions against the Indian Army, more so, after an unfortunate accident in the firing range due to an explosion on July, 17, in which a young boy, Fayaz Ahmed, lost both his legs. The Army has been quick to respond to the tragedy – it has organised the best possible treatment for the boy and has expressed willingness to look after his rehabilitation and complete education. The army has also set out on a massive initiative to clean out the area of unexploded bombs. The project goes by the name of “Operation Fallah.” Fallah is an Urdu word that means welfare. Operation Fallah was launched on August, 1 and is still in progress as it will remain till the area is not declared totally safe.

The issue of moving out the field fire range from Tosa Maidan came up for discussion during the civil-military liaison conference held in November, 2013. Chief Minister Omar Abdullah took a non-controversial stand and opted for a high-level panel headed by the chief secretary to suggest viable solutions to the issue. Now after the drubbing in the parliamentary election and the looming shadow of the state assembly election, the National Conference is out to politicise the issue by taking credit for the proposed vacation of the meadow. It is unfortunate that members of the ruling coalition are resorting to irresponsible statements for electoral gains.

Grandiose promises are being made to convert the area into a tourist hub. It is very wrong to feed the locals with such pipe dreams. Logic dictates that the incumbent government will not be able to make good any such promise unless it comes back to power which is highly unlikely. With the army gone and no alternate source of income in place the poor people of the area will be the worse sufferers even as the politicians earn their brownie points and move on to other more interesting topics.

The panel constituted for the purpose would do well to involve the locals in the decision making process. The people have to be appraised of their situation with utmost honesty, in case there is a concrete plan in place to develop the area it should be made public along with details of the gestation period. In the absence of any such initiative it may so emerge that the locals opt for continued presence of the army which is a lucrative source of income.

Those who are raising the issue in the media are conveniently sidelining the fact that the army has already agreed to shift the firing range to an appropriate place that may be designated by the committee that is in place for the purpose under none less than the chief secretary of the state. However, even with the best of intentions the Army cannot up-stake from Tosa Maidan and rush off to some other place in a jiffy. Appropriate infrastructure will have to be built in the new location and standard operating procedures created so as to ensure safety of military personnel as well as civilians. The process of change over, evidently, will be long and time consuming.

Training of troops cannot be set aside for such a long period of time when the alternate location is being prepared. Therefore, the best recourse is to identify the new area and carry out its development before handing over Tosa Maidan.

As elections approach and the political environment gets heated up Tosa Maidan will be linked, for political reasons, with revocation of Armed Forces Special Powers Act, de-militarisation etc that have no relation with the issue at all. Divisive elements will not stop their obnoxious campaign of vilification against the army even if the lease is not extended. In fact the non-extension of lease will lead to even more stringent demands for “de-militarisation.”

Deployment of artillery in the region is an imperative security requirement. It should not be forgotten that it was the artillery that played a vital role in ensuring victory in the Kargil war. The artillery units posted in Kashmir use the Tosa Maidan firing range to calibrate their guns. The need to do so in-situ is dictated by the prohibitive cost and great effort required for transporting heavy artillery equipment by road from the valley to the bigger ranges in central India. Also, the over taxed Jammu-Srinagar highway would not be able to take the load of such a large military movement. Baseless politicising of the issue will not accrue any tangible results; a solution has to be found within the realm of practicality.

The position taken by the Army is upright. Its requirement for a firing range is legitimate; there is leverage in location that has been extended to the government. The social repercussion of the move from the area needs to be addressed with seriousness; the people should not suffer due to political opportunism. The situation is not insurmountable and the postures of the various stake holders are not unreasonable; A viable solution is very much in the realm of reality if the intention is genuine; if, however, the issue being to be exploited and the drama is being played out for political gains then the matter will fester and create acrimony where none is necessary or desirable.