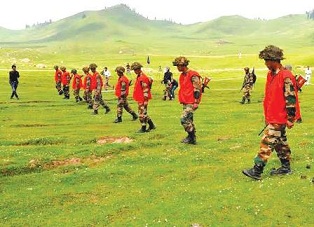 The decision of the Indian Army to clean up Tosa Maidan of unexploded bombs and also militant hide-outs was conveyed by Lt General Subrata Saha, General Officer Commanding of the Srinagar based Chinar Corps, on August, 01. This is yet another reflection of the humanitarian approach of the Indian army. The decision has been taken in the wake of the unfortunate accident in the field fire range due to an explosion on July, 17, in which a young boy, Fayaz Ahmed, lost both his legs. The boy has been adopted by the Army; he is being treated in a super speciality army hospital in Srinagar and will later be educated free of cost in an Army Goodwill School. The damage cannot be retrieved but the best possible rehabilitation will definitely be extended.

This decision of the army, for which work is already in full swing under an initiative called Operation Fallah (Welfare), has received widespread praise. In fact, it has created a history of sorts with a Kashmir based English daily, Greater Kashmir, that normally adopts an anti-army and anti-security forces posture dedicating an editorial to Operation Fallah on August, 4, titled “Real Sadbhavna”. The article contains a grudging appreciation of the Army. “In an exercise that can’t but be appreciated, Army has embarked on a three-month long Mission Fallah to clear Tosa Maidan of the unexploded shells,” says the first sentence of the editorial; the remainder, of course, goes on to advocate a removal of the field firing range. One can only hope that, over time, the newspaper will be able to see and appreciate all other good things that the Army is doing in Kashmir. Well begun is half done!

Evan more interesting is the reaction of the National Conference (NC). Clearly on the back foot for the impending electoral battle, the party is attempting to take all credit for the initiative of the army. “NC has taken an unambiguous and principled stand on this issue and has categorically voiced its irrevocable and unquestionable opposition to the extension of the lease for the firing range,” said Junaid Azim Mattu spokesman of the NC. Pray why then is the government taking so long close the case for all times to come? A decision to empower the chief secretary of the state to find a solution to this problem was taken in a civil-military liaison conference meeting chaired by none other than Chief Minister Omar Abdullah about nine months back in November, 2003. The Army has already expressed its willingness to shift the range to an alternate site that is identified by the government. So why is the government taking so long to identify the alternate site?

Greater Kashmir has gone to the extent of suggesting that the government has identified Bajpathri near Yusmarg in District Budgam as a viable alternate site. It is notable that Yusmarg is already an area with tourist potential so what will change? In any case the matter has not been made public by the government.

Chances are that NC will shun a bold decision so close to the Assembly election; it will allow the matter to fester and take as much advantage of Operation Fallah as much as is possible. Once again, in its eagerness to do good the Army may have played into the hands of the political establishment. Happily, one does not have to wait too long for the facts to come out; if NC is serious it will resolve the issue within the month of August itself.

The second assertion of the NC that it will develop the area into a tourist hotspot is quite beyond the realm of reality. Firstly, NC does not have enough time in power to even plan such a project let alone implement it. Secondly, there are many areas and meadows much more beautiful than Tosa Maidan that have yet to see any sort of development; such grandiose projects invariably fail to see the light of day. One would like to suggest to the people of Tosa Maidan to follow the RTI route to find out if any blueprint of such a development project has been prepared by the Tourism Ministry. Chances are that it will draw a blank.

This argument leads to yet other question of great importance; if not tourism then what is Tosa Maidan worth in terms of economic activity? The area being backward draws sustenance from the proximity of the army. The army is undertaking a number of social uplifting and development initiatives to compensate for the inconvenience being caused to the people. Presently the locals are earning their keep from the presence of the army, if this also goes than what would be their fate? This aspect is not even finding a fleeting mention in the hot debates being generated on the issue in political circles.

There are so many field fire ranges in India – Pokharan and Mahajan in Rajastan and Babina in Uttar Pradesh being the biggest. There are people living in the vicinity of these and other ranges also, they are not creating any such hue and cry as witnessed in Tosa Maidan; in fact, the areas have witnessed unprecedented prosperity because of the proximity of the ranges as has Tosa Maidan. The problem is that in this prosperity is not being acknowledged.

The army is going out of its way to assist the people of areas adjoining Tosa Maidan field fire range. It is also collaborating with the villages in the area to extend medical, education and sports facilities while this cleaning drive is on. Now what remains to be seen is what the government and the so-called civil society does in aid of the villages. One would look forward to hearing the government’s announcement of notifying an alternate site for the ranges and Greater Kashmir adopted a few villages in Tosa Maidan to build up on the dream tourist facility.