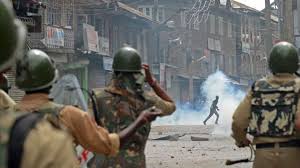 The situation in Kashmir post the gunning down of a terrorist, Burhan Wani, is running a traditional script. There is sponsored upheaval, disorder and disruption. The media, both electronic and print, is going all out to play the separatists against the nationalists. The panelists, commentators, analysts, academicians, think tankers, columnists et al are busy putting in their life time perceptions into the cauldron.

Interestingly, what is written in a particular newspaper or talked about in a particular television channel can be made out quite easily by simply understanding the “bias” of the establishment.

Newspapers being published in the Kashmir Valley are, as per norm, talking about “martyrdom of Burhan Wani,” lack of will of the central government to engage Kashmiris in talks, burgeoning local flavor of “militancy in Kashmir,” atrocities being committed by security forces, oppressive policies being followed by the government etc. The script is emotionally charged and designed to ignite a violent reaction (blood soaked streets, battered bodies and so on).

Newspapers published in Jammu are dwelling on lack of leadership in the present landscape of Kashmir (who is there to talk to), terrorists like Burhan Wani becoming unguided missiles, conspiracy to scuttle the Shri Amarnath Pilgrimage etc.

National newspapers channels are making futile attempts towards striking a balance in the argument of the separatists and nationalists and bringing in the Pakistan angle.

The television panelists, of course, are doing what they do best – adding to the confusion with an acrimonious blame game that lead nowhere.

Beyond this rhetoric  exists the need to get real and look at the situation with pragmatism.

The first and foremost reality is that Burhan Wani was a terrorist, an enemy of the state who carried an award of Rs10 lakhs on his head. His life was marked and his death inevitable. He knew it, his parents knew it and the people of Kashmir knew it. It is, in fact a wonder that he lasted this long.

Why then is the media and some elements in the Kashmir Valley reacting as if something unprecedented has happened? If those getting into hysterics now did not want Burhan to die in this manner, they could have imposed upon him to give up the path of terrorism and surrender. If he had been killed in the process of surrendering the anger would have been justified, under the existing circumstances where is the justification?

The second reality is that Burhan was not an ideologically committed militant, he was a young misled boy whose persona created in the social media got the better of him. He became cockier by the day, exposing himself in a manner that no professional guerilla would. He was, in short, a creation of the media and his death is also a media game being played out.

It needs to be highlighted that the intelligence of his whereabouts would have come from somebody close to him, hence, he had his own set of detractors in his own organization and his own state.

It is also quite obvious that the separatist leadership in Kashmir wants to have nothing to do with him. None of the separatist leaders attended his funeral or even made an attempt to do so. None is speaking out in his favour. The reason is quite apparent – they do not want Burhan to become bigger than them! Hence, the attempt is to bury the idea of Burhan as soon as is possible.

His death has created a fair high degree of chaos and disorder which has, most unfortunately, led to the death of more than thirty people who had no reason to lose their lives in this manner.

It will also have a long term economic repercussion, especially so, on the lower segments of the Kashmiri society. Those who are orchestrating and scripting the ongoing turmoil will, of course, turn out to be the beneficiaries. They are being paid for what they are doing

It is the honest, ineffectual shopkeeper, the restaurant employee, the taxi driver, the tourist guide, the daily wager who will be left deprived of earning during the tourist season and the pilgrimage to the Shri Amarnath shrine. Their suffering will be slow and agonising.

The misfortune is that those who take to the gun do not realise that they would be hurting only themselves and their own people and not anybody in Delhi or the rest of the country or the world. If this small point strikes home, a lot many problems will get resolved.

The state government has been elected by the people themselves. It holds a majority of functionaries from the Kashmiri Muslim community. Under these circumstances of virtual self-rule, with a more than ample economic support from the centre, there is no plausible reason to be dissatisfied.

The people have to see through the evil design of foreign powers, the killing of Burhan should serve as a warning to the parents of young boys in Kashmir that they need to take responsibility to keep their sons away from the evil of foreign sponsored terrorism..

The government should learn a lesson from the Burhan Wani episode and take proactive steps to wean away the youth from the path of violence.  The youthful energy of the Kashmiri boys and girls needs to be channeled into gainful pursuits. Employment would nip the problem in the bud in no time.

Media is a very important means for dealing with foreign sponsored propaganda. Instead of running after TRPs it should get a grip of the situation and use its reach to channel the youth towards the right path. It should expose the misinformation being spread and highlight the actual situation. To glorify criminals in the eyes of gullible youth does not serve the purpose of the nation.

The turmoil will die down with time and it will be business as usual. It is then that the national machinery should get going to ensure that no more Burhan Wani’s are created in the Kashmir Valley.