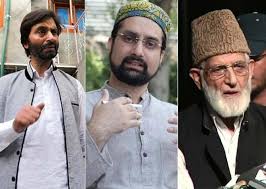 The agitation spearheaded by the separatist Hurriyat Conference and some other independent elements of the Kashmir Valley to derail the decision of the state government to provide Domicile Certificates to the West Pakistan refugees has exposed their anti-people self serving agenda.

The belt of villages along the Kathua-Pallanwalla axis in the Jammu region has a heartrending story to tell; in these villages reside a body of people whose elders moved with their families from Pakistan to the border villages in Jammu to escape the brutality of partition. Unlike the people who were dislocated from Pakistan Occupied Kashmir (POK) these people were not state subjects. Now six decades hence they continue to live without an identity having been denied the status of a state subject of Jammu and Kashmir. They continue to be referred to as refugees with the sobriquet of “West Pakistan Refugees” (WPR).

In view of their ambiguous status they are literally a people without a nation or an identity. Their generations have been denied basic human rights like the right of nationality, ownership of property, political empowerment, education and all other suchlike aspects that epitomise the free and democratic society of the Indian nation. They cannot even get government employment, hold a ration card or cast their vote in the state elections. What is even more distressing for them is that their brethren who went on to settle in other parts of India are bona-fide citizens of India and doing extremely well.

The situation of these refugees goes against the specific provisions of the articles of the Declaration of Human Rights espoused by the United Nations. These deprived, disempowered people are victims of such violations due to state apathy and that too despite several strictures from the Supreme Court of the country to ameliorate their pitiable plight.

It is with the intention of mitigating, to a small extent, the pain and suffering of the WPR that the coalition government of Jammu and Kashmir took the courageous step of providing to them basic identity cards (also being referred to as Domicile Certificates) that would give some modicum of respectability to their existence.

Providing such certificates to these hapless people does not imply that they will become permanent residents in the State of Jammu and Kashmir, it is no more than a small symbolic gesture.

The separatist Hurriyat leadership, most unfortunately, is giving a Machiavellian sheen to this very innocent, progressive and humane step being taken by the government. In an attempt to please their masters sitting across the border they are falling over each other to denounce the decision as anti-people and against the interest of the state at large.

The argument being put forth is that the act is a first step towards removal of roadblocks in integrating the refugees within the state and that such integration will change the demographic profile of the state and also erode its so-called disputed status.

“Issuing domicile certificates to West Pakistan Refugees, court verdict challenging the sovereignty of Jammu Kashmir and allowing outside banks to confiscate and hold properties in Jammu Kashmir are the issues of life and death for our existence as Kashmiris,” says a Hurriyat Conference statement on the subject while touching on some other issues also.

The foregoing constitutes a frivolous, fatuous and irrelevant argument. How on earth can 1 to 2 lakh people who are already residing in the state for the last six decades influence its demographic profile and constitutional status? They do not even form 2 to 3 percent of the population of the state which has a Muslim majority.

It also has to be noted that China has taken over large swathes of land in Gilgit-Baltistan in order to further its ambitious China Pakistan Economic Corridor (CPEC) project. This constitutes blatant violation of the disputed nature of the region by both Pakistan and China, something that the separatist leaders are at great pains to ignore.

The separatists are only exploiting the situation to give impetus to yet another round of agitations. They wish to flame fires of unrest in the valley in order to keep their masters across the border happy and keep the most important cash flow going. Calls for a shut down as protest against the government decision have elicited a lukewarm response, indicating disinterest of the people in the position taken by the Hurriyat Conference on the subject.

It is established beyond doubt that the separatist element in Jammu and Kashmiri not concerned with the well being of the state or its people. The separatist vision, being centric to a small geographic portion of the state and only one community of its people, is parochial and self serving. It is divorced from the Geo-political, social and ethnic realities that the state has to contend with for its stability and progress.  In pursuance of their disruptive policies, the separatist have a miniscule following, if at all. What keeps them going is the unlimited access to funds coming from various foreign inimical sources. It is these funds, not popular support, that provide fuel to their machinations.

The separatists are out to create a communal divide that would weaken the social fabric of the state and cause immense harm to its growth and prosperity.

It is well known that the security forces operating in Jammu and Kashmir have effectively contained the threat of terrorism after great sacrifice and built a platform for the political process to gain centre stage. Destroying the nuisance value of the separatist element should be the first step taken by the government in this direction. The government should take some bold steps to expose the evil design of the separatists and put a lid on their reprehensible activities. If this sore is allowed to fester any longer with will again turn into a fatal wound which should be avoided under all circumstances.

(Mehtab Karan is a US based domicile of J&K)