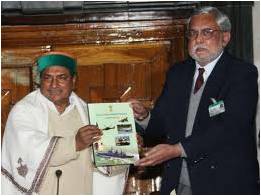 The Italian government had instituted an inquiry into its state owned aerospace company, Finmeccanica, on the suspicion of having paid a bribe to get a contract for the supply of 12 Augusta Westland helicopters to the Indian Air Force. Defence Minister AK Antony has ordered a CBI enquiry into the deal and has put on hold the delivery of nine out of the twelve helicopters that were to be purchased. The matter is being hotly pursued in the political and media circles. However, there are a few rational voices, quite suppressed in the clamour for blood, that are expressing reservation about the fall out of the entire sordid affair on the already languishing defence acquisition programme of the country.

That the country is in a very critical state so far as military hardware is concerned is well known. A letter written by the previous army chief, General VK Singh, to the Prime Minister in March, 2012, dwelled on the security risk being faced by the country due to shortages in weapon systems and even ammunition. The resultant furore caused the moribund defence ministry to come out from its slumber, but as the heat declined, it managed to go back to its usual procrastination. With this scandal it is being feared that whatever little progress is being made will be scuttled by the defence minister known more for blacklisting weapon manufacturing firms rather than doing business with them.

Before proceeding on the subject it would be worthwhile to recapitulate the manner in which the defence acquisition process has changed over time. That India was ill prepared for the Indo-China war of 1962 is well known. Even in 1965 Pakistan had better weapons than India, especially its newly acquired Patton tanks. In the 1970’s India woke up to the reality of the security challenges that it faced but lacked the finances required to fulfil its defence and security requirements. This is when the cold war and the erstwhile Soviet Union (USSR) came to India’s rescue.

The USSR provided India with military wherewithal against deferred rupee payments which facilitated weapon acquisition despite the chronic shortage of foreign exchange. Contractual provisions also catered for licensed manufacture and modification in India. Tanks, armoured personnel carriers, artillery, air defence equipment, aircrafts, submarines and all other weapon ancillaries started rolling in from the Soviets in large quantities. The India armed forces expanded at such a fast pace that within a period of a decade and a half, from mid nineteen seventies to early nineteen nineties, the country became a major global military power.

The disintegration of the Soviet Union in 1991, followed by the liberalisation of the Indian economy heralded a major change in the defence acquisition process of the country. The Soviet defence industry went into disarray and could not meet India’s burgeoning military hardware requirement; as India’s coffers swelled with foreign exchange it gained capability to look for global vendors in the arms market. The first major deal in the changed environment was acquisition of the Bofors 155mm Howitzers in 1986; the allegations of bribery and the political fallout of this deal is well known. As the clamour for transparency in defence deals gained momentum the ministry of defence came up with a manual called the Defence Procurement Procedure (DPP) in 2002. The manual has been upgraded and modified about six times since its inception; the latest edition comprises of about 260 pages.

Even a layman can understand that a manual this large would provide ample leverage for identifying loopholes in the acquisition process, raising objections and seeking judicial intervention. This can, in turn, be used to scuttle deals when required, a weakness that can be used to foster corruption. Let us take a hypothetical situation. When a deal is being processed the competitors are ready to go to any extent to swing it in their favour, scuttling the process a few times adds to the competition and results in astronomical amounts being offered as bribes leading to maximum amounts of money exchanging hands. Once the deal is done nothing more can come out of it. So what is the most lucrative policy – do not allow a deal to go through; in any case the scope is always enlarging due to inflation. This could be the malaise that the Indian defence acquisition process is suffering from.

As is usual with Indian bureaucracy the DPP has been formulated with the intention of vesting maximum powers with the bureaucrats. It has reduced the users (the armed forces) to recommending bodies charged with the responsibility of carrying out user trials. In a very cynical approach the ministry officials keep the acquisition process hanging at the service level headquarters for years on end by raising insipid observations. This adds to the impatience of the competitors and creates documentary evidence to put the users in the dock if underhand motives are exposed at a later stage. As a result, the relation between the government and the armed forces is deteriorating by the day and an ugly face off with disastrous consequences cannot be discounted.

The bottom line is that, despite the DPP, corruption and opacity in the weapon acquisition procedure has not been curtailed. What has been achieved is reduction of the armed forces into inoperability due to lack of wherewithal, you name a weapon system and we do not have it and are not likely to get it in the near future. The armed forces are getting frustrated leading to their polarisation form their civilian interface; India is gaining a terrible reputation in the international arms market and there is bad blood all over amongst a host of other problems.