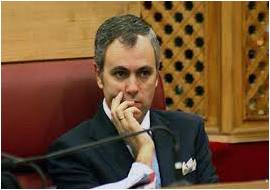 Omar Abdullah, Chief Minister of Jammu and Kashmir, was conferred with honorary membership of the Foreign Correspondents’ Club in New Delhi. It seems that, while accepting the honour, he also held a press conference of sorts whose proceeding were reported in the media in great detail. One would have expected the chief minster to use this platform to project his state on a positive note. He could have spoken of the great strides being made in development of infrastructure, for which he can take considerable credit. He could have spoken about the hopes and aspirations of his people who are now emerging, slowly and steadily, from the shadow of the gun to carve out an exciting and progressive life for themselves. Most importantly, he could have carried out a hard sell for foreign tourism that is the mainstay of the economy of his state and is in full swing at the moment. The club, with its elite clientele was an apt forum for this kind of engagement.

The chief minister, instead, chose to talk of the oft repeated and much debated subject of revocation of the armed forces special powers act (AFSPA) from the State. What he said was a repeat of what he has been saying for a long time now. “We understand that you cannot overnight take it (AFSPA) away. It has to be a gradual process. It has to start with those areas where Army is no longer required to operate and that is what we have been asking for,” he said.

Beyond this well known posture, the chief minister also made some more significant observations. He said that partial revocation of the AFSPA would be an “important confidence building measure”. He went on to cite the coalition government in his state as a hurdle for revoking of the Disturbed Areas Act, a prelude to the removal of AFSPA. “I have a coalition government; a coalition government in which Congress is an ally of mine. They are also the single largest constituent of the United Progressive Alliance (UPA) at the Centre. Clearly for me to do anything in the state I need a majority of my own or I need to take Congress on board,” is how he explained the situation. Finally he said that the army was reluctant to move forward on this subject and expressed a hope that some common meeting ground with the army may be found soon.

One wonders as to whose confidence Omar was referring to while stating that revocation of the act would be an important confidence building measure. Ground reports suggest that the people of Kashmir, more so those living in the remote parts of the valley, feel most confident when they have an army camp in the vicinity. Not only does the camp provide much needed security and freedom from extortion by the terrorists still afloat, it also gives a perceptible boost to the economy of the area. Revocation of the act cannot give confidence to Omar himself so long as he is the chief minister; one demand will lead to another from the separatist camp while the people will rise in open agitation against the decision. He will get cornered from both sides and the vicious cycle may herald the beginning of the end of his political career, surely he knows and understands this.

When Omar talks of being tied down by compulsions of coalition politics one does get an impression that he is trying to find a political route out from the mess that he has created by being so vocal with regard to this flawed demand. He knows that what he says cannot and should not happen in the short term, so he is trying to find a scapegoat; who better than the Congress party? It is interesting to note how he has left a cat amongst the pigeons by implying that if he gets a clear majority in the next elections he will revoke, not the AFSPA, but the Disturbed Area Act. These are puerile politics at best.

His talk of reluctance of the army in agreeing to the demand for partial revocation of the act also does not stand to analytical scrutiny. Successive army chiefs and army commanders have made it very clear that they only give recommendations, based on their appreciation of the situation on ground, to the government. The continuance or otherwise of the act is a decision to be taken by the government and the army would be more than willing to comply with the same. If Omar wants to find some common meeting ground he should find it with the central government, not the army.

On March, 06, 2013, Ghulam Nabi Rattanpuri, the National Conference, MP, raised a query in the Rajya Sabha, “Name of the states that have requested for the revocation of AFSPA and name of states who demand abolishing or amendments to this Act”. The written reply that came from the Union Home Ministry was “Nil”. This implies that Jammu and Kashmir has not formally requested for abrogation of AFSPA. So what is this drama all about?

The writing on the wall is that the time is not right to upset the security paradigm in the state of Jammu and Kashmir where the hard earned peace is still fragile and trauma of terrorism is still fresh in the minds of the people. A sudden change can have disastrous social, political and security implications. The best option is to give time for the dust to settle down. If AFSPA has become redundant in some parts of the State it will become so in others too soon enough. Undoubtedly, the security forces, especially the army, would be waiting for such a happy situation to come by quite eagerly. In the meantime, it would be best for Omar Abdullah to carry on the good work that he is doing on the development front which is more critical for him at this stage.