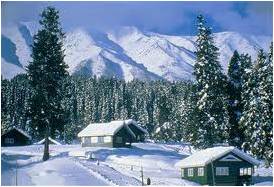 The winter season has arrived in earnest and, as always, core issues of survival have taken precedence over superfluous and vacuous political agendas in Kashmir. Mostly, the separatist lobby is forced to go into hibernation during the peak winter months. All the same, compulsions of political survival do not allow them to sit silently. They continue to harp on non-issues and look forward to creating issues where there may be none. This year they are finding it particularly difficult since their support system both across the border and within the state has greatly weakened.

The people of Kashmir have realised that their economic, political and strategic survival is inextricably linked with the larger fate of India; the vagaries of a severe winter season, when dependence on central assistance increases manifold, only serves to drive home this point much more strongly. Political posturing notwithstanding, this is a fact that is realised by all the mainstream political parties in the state. Thus it is that one hears Mufti Muhammad Sayyed voicing his opinion on Foreign Direct Investment (FDI) in the retail sector while others in the Hurriyat like Bilal Lone talk of establishing stronger bond with the common man in the state to understand his needs and priorities.

The hawkish Syed Ali Shah Geelani, of course, continues to harp on anti-India issues rather than Kashmiri centric ones. Even though he would like to project himself as a freedom fighter striving towards independence for Kashmir, his major concerns are for Pakistan. Most recently, he has been one of the most vocal voices that condemned the NATO strike resulting in the death of Pakistani soldiers. He has gone so far as to even suggest a nefarious plan of the western countries to dismember and disintegrate Pakistan while painting the latter as the last resort of the Muslim cause in this world. All this for a country whose very political, social and economic existence is in jeopardy; a country, moreover, that has been established as a terror monger the world over. Now if such is the character of the country that enjoys the unstinted loyalty of Syed Ali Shah Geelani, one can only shudder while envisaging the future of the people of Kashmir, should this man’s plans for the region ever bear fruit. On the domestic side, he is in complete agreement with the hated Islamic fundamentalist segment in Kashmir which recommends the imposition of medieval Islamic rules. In complete disregard to Kashmir’s enlightened Sufi couture, Geelani is advocating fundamentalist Wahabi Islam tenets including ban on cinemas and other harmless cultural activities.

The question then arises: when it is so clear to the pragmatic man on the street that his individual interests and those of the region at large lie firmly with India, why are the likes of Geelani so keen to espouse a regressive and dangerous course for Kashmir? Clearly, he does not have the interests of the Kashmiris at heart. It seems that he is, in fact, a Pakistani at heart who has been planted in Kashmir for the specific purpose of dismemberment of Jammu and Kashmir.

The saving grace is that the people of Kashmir have seen through such hollow rhetoric and Geelani Inc no longer enjoys popular support in the valley. Pakistan is also no longer in a position to mobilise world opinion in favour of the so-called Kashmiri cause. In fact, quite to the contrary, with the reputation that Pakistan has earned for itself, any cause that it associates itself with is likely to be tarred with the same disreputable brush. Through his continuous rhetoric along this strain, Geelani is only putting his own reputation as a leader of the masses in danger.

The recent developments in the Af-Pak region that have led to a virtual face-off between once upon a time good friends, Pakistan and United States of America, is certainly a cause for concern as far as security issues of India, especially Kashmir, are concerned. If there develops a situation of conflict between the super power and Pakistan, there is every possibility of an overspill into neighbouring areas like India and Afghanistan. Pakistan is a country governed by the three A’s of Allah, Army and America. Now with one of the three pillars turning against the other two, the situation indeed has become very volatile. In the context of this state of affairs, there is a need for India to remain very vigilant. The role of the defence forces acquires additional significance in such a scenario. Even a minor negligence may lead to major losses and setbacks.

The winter agenda of Kashmir, thus, needs to be formulated on the basis of the twin strands of local politics and foreign intervention. It is the people who need to see through the local political posturing and identify what is good for them or otherwise. The time has come for the destiny of Kashmir to be placed in the hands of an ideologically committed, people centric leadership which can chart a desirable course for progress and development. In the aspect of increasing regional instability, it is the security forces which will be called upon to counter the highly volatile environment emerging in the neighbourhood. This will translate into increased vigilance, proactive operations against terrorists in the hinterland and keeping a close watch on the situation to counter any misadventure along the line of control. Obviously, the security forces have a very uncomfortable winter ahead of them. At the end of it all, it is the people who will play a dominant role in maintaining peace as also the pace of development. They have to expose vested political interests and understand the herculean challenge being posed to the security forces for which their unstinted support is necessary.