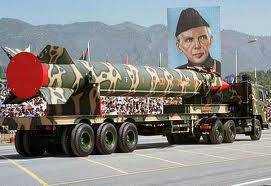 “If India develops an atomic bomb we too will develop one, even if we have to eat grass…”. When Pakistan’s late Prime Minister, Zulfikar Ali Bhutto, spoke these words, sometime after having suffered a humiliating defeat in the hands of the Indian Army in 1971, he would not have realised their prophetic significance. Today, exactly four decades later, Pakistan is on the verge of eating grass even as its nuclear stockpile is increasing at a rapid pace. The country is fighting a challenge of survival with its back against the wall, its economy is in shambles, internal security is in a mess, there is a distinct failure of governance, yet, its nuclear arsenal is said to have exceeded the 100 mark by a long margin and it continues to grow. Significantly, in case we go by numbers, Pakistan’s nuclear stockpile seems to have crossed India’s holding already.

Pakistan pulled all stops to get its hands on the bomb, especially so, after India conducted its first nuclear test in 1974. Pakistan “father of the nuclear bomb”, AQ Khan, broke every rule in the global nuclear Bible to get the bomb and in the process he became the biggest nuclear smuggler and pariah on the face of the Earth.

Today, Pakistan has in its kitty, no less than 15 nuclear sites of which only three are under the preview of the International Atomic Energy Agency safeguards. For more than a quarter century now it has been stockpiling Highly Enriched Uranium (HEU) from its Kahuta facility and is now poised to add to it with Plutonium for Khusab. A few years back Pakistan was reported to have about 2000 kilograms of HEU and about 100 Kilograms of bomb grade Plutonium, enough for more than 100 nuclear warheads.

India’s imminent entry into the nuclear club has given to Pakistan an opportunity to pressurise its allies like the US and China to support its nuclear ambitions. Whereas, its begging has had no effect on the US, China has responded with alacrity and, against all norms set by the Nuclear Suppliers Group of which it is a member and the Non Proliferation Treaty of which it is a signatory, it is poised to provide to Pakistan two reactors, Chasma III and Chasma IV, which will have the potential to produce weapons grade Plutonium. It is notable that China has already provided Pakistan with Chasma I and Chasma II and this add on will greatly enhance Pakistan’s already very potent nuclear capability.

Contiguous to building a nuclear stockpile is the need to possess delivery systems. In this regard Pakistan’s indigenous programme for the production of missiles has been given a considerable boost by both China and Korea, it also has its US and China enabled Air Force with F-16’s and other jets capable of delivering a nuclear cargo. It can be safely presumed that Pakistan has a tested capability of targeting all corners of India with nuclear weapons should it choose to do so.

Most nuclear capable Nations, including India, have placed the control of nuclear assets in the hands of the political leadership. Not so in Pakistan, where the control is exclusively with the Army. Once Bhutto was eliminated, General Zia-ul-Haq placed the nuclear assets under the President which meant under himself. Since he was also the Army Chief, the assets de facto came under the Army. After Zia’s demise the control stayed with the next President, Ghulam Ishaq Khan, but was wrested from him soon enough by the Army Chief Mirza Aslam Beg at the behest of the then Prime Minister, Benazir Bhutto, and so it has remained ever since.

For the purpose of appearances there is a Nuclear Command Authority (NCA) under the National Security Council of Pakistan which has designated members from the political leadership and the bureaucracy, however, its Development Control Committee and the Strategic Plans Division is exclusively in the hands to the Armed Forces thus giving to them de facto control; during such periods when Pakistan is under military rule, which is more of a norm than an exception, this sham is totally dispensed with.

Pakistan only looks towards India as its enemy and its military preparedness, both conventional and nuclear, is carried out with India in mind. In this regard it is, today, enjoying a win-win situation. Its requirement of conventional military preparedness is being met by the US and the nuclear threshold is being maintained by China and Korea. In the bargain it is building up unprecedented military and nuclear assets while the world sits back and watches. It constantly advocates a no-first use policy but leaves no doubt about its intention to go nuclear at a very early stage of a conventional conflict against India. The fact that is could deter an all out war in the Kargil episode has further validated its policy hence the urge to further build upon it.

The whole world is concerned about the possibility of the nuclear assets falling in the hands of Jihadi fundamentalists. This concern is justified since fundamentalism has seeped deep into the Pakistani Army. In case the situation is not reversed soon the chances of these assets getting compromised are very high.

While indulging in blatant nuclear proliferation Pakistan does not desist from justifying its action on the basis of a perceived threat from India, it paints India as the villain bent upon destabilising South Asia while projecting itself as a victim. It is time for the international community to step in and take firm action against this very potent threat to world peace and security. The competition between the US and China and the problems of the war against terror cannot be allowed to put the entire humanity at risk.