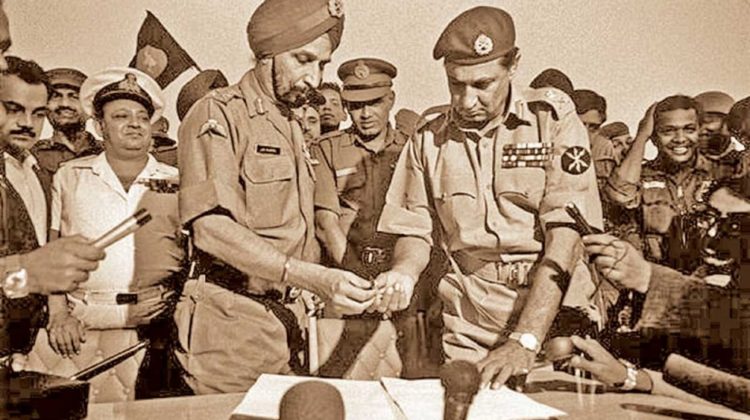 After securing an absolute majority in the general elections in East and West Pakistan in early 1971, the Awami League of Pakistan led by Mujib-ur-Rehman asked for greater autonomy for East Pakistan. The military regime of Pakistan responded with a full scale military crackdown, named Operation Search Light under Major General Tikka Khan, killing lakhs of civilians and raping thousands of poor women in order to coerce East Pakistani masses into submission. Consequently, 10 million Bengalis fled to India as refugees, thus putting a great burden on the Indian economy.

The Government of India led by Mrs Indira Gandhi advised Pakistan to stop atrocities on innocent civilians and create a situation for the return of the refugees. Sadly, the United States, China and other Muslim nations indirectly supported all actions by the Pakistan Army. India then launched a diplomatic offensive to  the USSR , USA, France, England and other important countries .The master stroke was a Defence Treaty with the USSR to counter direct involvement of China and USA in the event of a war between India and Pakistan.

Despite tremendous restraint, India was compelled by Pakistan to declare war after the neighbouring state opened hostilities in the western front with pre emptive air strike on 11 Air bases of India. The war was fought on both eastern and western front. The Indian strategy was aggressive action in the Eastern theatre and offensive defense in the Western theatre. The war lasted for 14 days and culminated with an unconditional surrender by Lt. General AAK Niazi, military commander of East Pakistan at 1431 h on 16 December 1971.

As the war progressed on both fronts, on 13 December at 1100 h, an American resolution for immediate ceasefire between India and Pakistan under UN supervision was put up in the UN Security Council. USSR exercised its veto for the third time but also told India to hasten operations as another veto would become difficult for them. 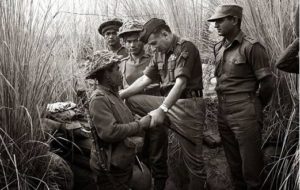 General Sam Manekshaw with troops during the war

The PM informed General Sam Manekshaw and a policy was formulated to mount military and psychological pressure on the Pakistani military leadership at Dhaka. The responsibility of discussing a surrender of the Pakistani forces with Lt. General AAK Niazi was vested upon Lt. General JFR Jacob, Chief of Staff of the Eastern Command. General Jacob contacted General Niazi with terms for an honourable surrender but received no response.

On 14 December, after Dhaka had been subjected to massive air attacks and when the threat of Mukti Bahini, that was on the prowl like wolves, dawned upon the Pakistan leadership, Governor Dr. AM Malik resigned in a meeting attended by the UN counsel and foreign reporters among others. At 1600 hrs on the same day, Lt. General Niazi approached Herbert Spicvac, US Counsel General with a draft proposal for ceasefire under the UN auspices. The UN resolution for ceasefire between India and Pakistan was proposed by Poland and passed on 15 December 1971.

It was then that the Army decided to send Lt. General Jacob to Dhaka to negotiate the surrender. The Indian delegation went in a MI 4 to Dhaka via Jessore. When they landed at Dhaka they saw a squadron of Sabre F-86  fighter aircraft on the side runway, non operational since the main runway was badly damaged.

At first glance General Niazi rejected the document carried by General Jacob which called for an unconditional yet honourable surrender. He insisted upon discussing only a ceasefire. Niazi’s advisors, Major General Jamshed, Rear Admiral Sharif , Air Commodore Imam and Air Commodore Farman Ali suggested to him to not agree to the surrender. Lt. General Jacob then explained to him that the surrender ensured dignity of officers and men as per Geneva convention and later safe return to West Pakistan. He also hinted at the possibility of a violent reaction by the Mukti Bahini and people of Bangladesh against the Pakistani soldiers in the absence of protection by the Indian forces.  Lt. General Jacob said that in case the terms were not agreed to, the offensive would resume immediately and Mukti Bahini fighters were ready to be unleashed. He gave Niazi thirty minutes to decide and walked out of his office. 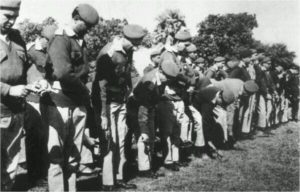 At 1600, Lt General Jagjit Singh Aurora, Army Commander of the Eastern Command of the Indian Army and his entourage arrived at Dhaka in a fleet of five MI 4 and four Alloutte Helicopters. General Niazi and  General Jacob were there to receive him. Accompanying the Army Commander were Mrs Bhanti Aurora, Air Marshal Dewan, Vice Admiral Krishnan, Lt Gen Sagat Singh and Wing Cdr Khondkar. The motorcade headed for Race Course, the venue of the surrender ceremony . A joint Guard of Honour of India and Pakistan was presented to the Army Commander.

The surrender instrument had been carried by the Army Commander. Both commanders signed at 1631 h on 16 December 1971. Niazi undid his epaulettes’  and removed his .38 Revolver with lanyard and handed them over to Lt. General JS Aurora.

Shouts of “Joy Bangla” and pro-India slogans were heard; there was wild excitement everywhere. Dhaka was put under control of Lt. General Sagat Singh. General Niazi was shifted to Calcutta and the remainder of the Pakistani troops were despatched to safe POW camps. Thus a news nation was born and the map of South Asia changed forever. The surrender at Dhaka will remain the finest hour for India and Bangladesh.

The credit must go to the valiant officers and soldiers of Indian Armed Forces especially those who did not come back home and made supreme sacrifices. Flying Officer Nirmal Jit Singh Sekhon,  2nd Lieutenant Arun Khetrpal, and Lance Naik Albert Ekka were awarded the Param Vir Chakra posthumously; Major Hoshiar Singh was the living recipient of the highest gallantry award of the nation. 1400 brave Indian soldiers fell to a hero’s death in the war; 4000 were wounded. Due credit must also be given to the Iron lady, Indian Prime Minister Mrs Indira Gandhi, who snubbed US President Richard Nixon and challenged the UN Security Council. Credit also goes to Shri Atal Bihari Vajpayee, then leader of opposition, General Sam Manekshaw ,then COAS. General J S Aurora, Eastern Army Commander and all others who fought and won the war with courage and conviction.