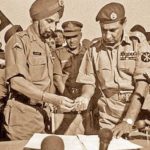 Col Alok Mathur After securing an absolute majority in the general elections in East and West Pakistan in early 1971, the Awami League of Pakistan led by Mujib-ur-Rehman asked for greater autonomy for East Pakistan. The military regime of Pakistan responded with a full scale military crackdown, named Operation Search Light under Major General Tikka Khan, killing lakhs of … END_OF_DOCUMENT_TOKEN_TO_BE_REPLACED