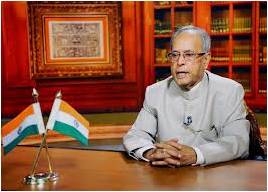 The President of India is the Commander-in-Chief of the armed forces of the country. It is in his name that war is declared or peace concluded, of course, subject to approval of the executive authority and the parliament of the country. As supreme commander he enjoys all the trapping of military pomp and ceremony. He has a grand mounted body guard, a serving general officer as his military secretary, a number of tri-services aides-de-camp and other staff members. He has a fleet of Air Force jets at his disposal.

As in other aspects of governance, the Indian constitution mandates that the military powers enjoyed by the President remain ceremonial in nature. Accordingly, one sees the President reviewing the Republic Day parade with all military grandeur and then attending the ceremony of “Beating the Retreat” at Vijay Chowk, New Delhi after a few days. The President is also called upon to confer awards to service personnel during investiture ceremonies held at Rashtrapati Bhawan; present Standards and Colour’s to military units and establishments; attend receptions in the residences of service chiefs on ceremonial occasions etc. In recent years, Presidents have also been seen taking sorties in fighter aircrafts and attending military exercises atop tanks. Beyond this, the supreme commander is mostly visible to his rank and file only through the medium of television.

The question here is – does it suffice for the supreme commander of the third largest and operationally committed army of the world to restrict his interaction with his soldiers only to a few ceremonial occasions? Before articulating the issue, one can look upon the manner in which supreme commanders of other armies across the world relate to their troops. There have been a number of instances where the President of the United States, who is also the supreme commander of the armed forces of the nation, has flown in a secret and impromptu manner to areas where US forces are deployed, be it in Iraq, Afghanistan or any other part of the world, in order to be with the soldiers on ground. The best part of these visits is that the President interacts without any ceremonial protocol. One can recall Barak Obama having food with his soldiers in queue and interacting with them informally. It is worth imaging how the US soldiers feel on such occasions, how their morale is boosted. This would also have provided to the supreme commander an opportunity to understand how his soldiers live and fight in the name of their country.

The monarch of the United Kingdom is also the supreme commander of the country’s armed forces. The royal family of England is known to, not only send its wards for military service, but also to stand by their troops during war and emergencies. During World War I, the ruling monarch, King George V with his wife Mary, visited the front on a number of occasions. During World War II, the royal family refused to vacate Buckingham Palace despite it being hit more than once by German bombers. This was done to maintain the morale of the people and the soldiers. Like his father, King George VI also visited British troops across the world all through the war. Then Princess Elizabeth, now the Queen of England, took up service as a Lieutenant in the Auxiliary Transport Service and drove a truck.

Indian soldiers have been at war, conventional or non conventional, for many decades. The situation in many ways is far more difficult; constant vigil, continuous risk to life and mental alertness at all times is too much for any human being to take. Under the circumstances, is it enough for their supreme commander to occasionally take a joy ride in a fighter jet or a tank? On top of it, media coverage makes the whole thing look like a joy ride. The seriousness and the message is missing.

The spirit of the Indian Constitution looks upon the President as the conscience keeper of the nation, a sobering influence in the turbulence of democratic politics. The armed forces also look upon the President as the last bastion for their rights, the person who will provide to them both support and guidance. To fulfill this moral responsibility the President needs to reach out to the forces; they cannot leave their posts and come to him, he has to go to them. In case of differences emerging between the government and the forces he needs to render sage advice and resort to gentle prodding to iron them out. At all times, he needs to instill confidence amongst the soldiers that their welfare is a primary concern of the nation.

The new President of India, in his Independence Day message, found it prudent to devote only four lines to the armed forces in Paragraph 20 of his 21 Para address. This at a time when the forces are facing grave challenges along the borders and in insurgency afflicted areas. This also at a time when there are simmers of discontent in the soldering fraternity, both serving and retired, due to the apathy of an insensitive government. The President could have used this occasion to apply a soothing balm over frayed nerves of the forces. One wonders about the political constraints which caused the President to adopt a casual attitude of this nature. President Pranab Mukherjee is a veteran leader and politician; he has been Union Defence Minister and Finance Minister apart from holding many more important portfolios over long years in public life. None knows the interface between security and politics better than him. He is most qualified and capable of setting new precedents in the exercise of his functions as supreme commander of the armed forces. One would expect the new President to break new ground.