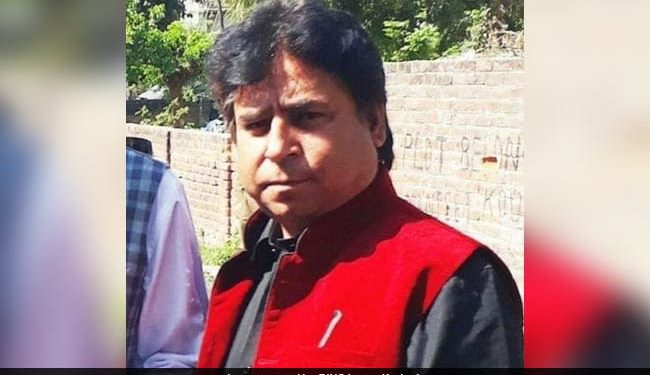 The brutal murder of Ajay Pandita in Village Lukbawan, Larkipora, District Anantnag has sent shock waves across Kashmir. Ajay Pandita was a member of the Congress party and Sarpanch of his Village. He and his family had migrated in early 1990’s but returned to their native land around two years back.

Responsibility for the killing has been claimed by the “Terrorist Resistance Front” (TRF), a  new terrorist organisation  created by foreign powers for amalgamation of Lashkar-e-Toiba (LeT) , Jaish-e-Mohammad (JeM) etc under one banner. It has been necessitated since terrorist numbers are too small for individual functioning. Pakistani involvement in the decision to carry out the killing comes across quite clearly. Security forces have launched a huge manhunt to nab the culprits.

All political parties have condemned the brutal murder and shown determination to challenge the evil designs of foreign powers. The Kashmiri Pandit community has expressed apprehensions, “It is a planned attack by Islamic terrorists to target minority Kashmiri Pandit community in Kashmir valley to trigger fear psychosis among them like they did in 1990s…” said  Vinod Pandita on behalf of the All Party Migrant Cooperation Committee (APMCC).

While the apprehensions of the Pandit community are absolutely justified,  one needs to keep in mind the fact that terrorists are indiscriminate in their choice of targets. In recent days terrorists have, equally brutally, gunned down a Kashmiri Muslim youth named  Danish Najar in Sopore, District Baramulla, North Kashmir. Terrorists have killed Hindus, Muslims,  Sikhs and others without remorse all through the period of terrorism. Kashmiri Muslims have lost as much to terrorism, if not more, as the Kashmiri Pandits. The need, therefore, is to fight the enemy together without giving to him an opportunity to cause division on religious and community lines.

The Kashmiri Pandit community has witnessed, post abrogation of Article 370,  a ray of hope with regards to its relocation to its ancestral and traditional home. The Kashmir Muslims have also welcomed the idea of the move back. This situation has alarmed the terrorist masters sitting across the border. They are well aware that the return of Pandits to their homeland will spell total failure of their mission that was initiated with the forced exodus of the community. The reason behind the killing of Ajay Pandita was creation of a fear psychosis to stop the plans to return back.

In its malevolent machinations the terrorist leadership has failed completely. The very brave family of Ajay Pandita has decided to stay back despite the terrible and mindless violence that has taken their loved one away from them. , “I’m pained that terrorists shot my son at his back. He has two daughters, who even after this incident have said that they will not leave their native place,” said Dwarika Nath Pandita, the father of Ajay Pandita. This is courage at its best; the family deserves a place of honour among the true soldiers of the Nation.

The security forces continue to exert tremendous pressure upon the terrorists. They have neutralized four dreaded terrorists in Shopian, Kashmir, on Monday, 08 June.  These terrorist  were extortionists who indulged in intimidation and arbitrary abduction/killing of innocent civilians, especially out of the state truck drivers.  Earlier, on June,3, three terrorist were killed in Kangan, Pulwama and some were killed in Rajouri while trying to infiltrate. Within this year, as many as 93 terrorist have been killed of which 22, including top commanders have been killed in the last two weeks. The count is increasing by the day.

The situation for terrorists in Kashmir is so bad that Pakistan was forced to send a desperate request to China to create an issue along the Line of Actual Control (LAC) to divert attention from Kashmir. China is so badly compromised by the non-starter China Pakistan Economic Corridor (CPEC) and its own vulnerabilities in the post-COVID environment that it has actually gone ahead with the misadventure. Now it will be forced to recoil with the proverbial “egg on its face.”

This apart, Pakistan has been carrying out incessant ceasefire violations all along the Line of Control (LOC). There are three reasons for the same. First, to assist in infiltration of badly needed new cadre and more importantly, arms and ammunition. Second, to build-up the morale of terrorist cadre operating in Kashmir. Third, to take pressure off the terrorists operating in the hinterland. Pakistan has been unsuccessful in all aforementioned and has, instead, exposed itself as a barbaric state more interested in furthering evil agendas than meeting internal critical conditions, especially the  rapid spread of the Corona Virus. The terrorists, now under extreme pressure, needed to strike urgently and thus killed mercilessly  the innocent Ajay Pandita and Danish Najar.

A vast majority of Kashmiri Muslims are eager to see the return of their Pandit brothers. The security forces have the security situation in the Valley well under control. This is the best time for the Kashmiri Pandit community to move in and reclaim what is theirs. The concept of a separate area being earmarked for them would, in military terms, be reflective of a siege mentality that would prove to be counterproductive in the long run. The community should aim at accessing the whole of Kashmir as it did earlier and not get constricted into a Ghetto.

The Government can help by remaining sensitive to the vulnerabilities of the minority community in Kashmir who definitely are soft targets for the terrorists. Once the vulnerability is addressed  and the Ghetto mentality discarded, innovative solutions for enhancing security will present themselves. Local Defence Committees, akin to the Village Defence Committees (VDC) that were so successful in combating terrorism in rural areas, is an option that can be considered. Such committees, comprising of all Kashmiris, will strike terror in the hearts of terrorists.

One hundred percent security is not assured to anybody anywhere in the world and should not be expected  in this case too. Let the sacrifice of Ajay Pandita not go in vain; if more people take a courageous step like him and his family, the terrorists will be defeated in their own game.

(Dr. Simrit Kahlon is an academician and a social activist)