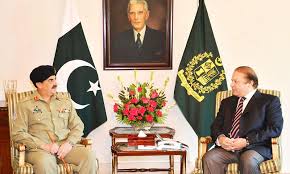 Nawaz Sharif may have appointed six army chiefs for his country during his multiple stints as prime minister, but each instance has posed for him a different set of challenges; this time round is no different.

It is quite apparent that Nawaz Sharif would like to see the exit of the incumbent army chief, General Raheel Sharif, and that too as soon as possible, but, it is easier said than done.

Nawaz Sharif wanted to develop good relations with India and moved conclusively in this direction by attempting to build an equation with Prime Minister Narendra Modi. The Pakistan Army, however, put paid to his intentions by creating for him a political challenge in the form of Imran Khan. In order to save himself, the beleaguered Nawaz Sharif had no option but to hand over the foreign policy of his government, especially with respect to India, to the army.

Now an opportunity has presented itself for him to get back at Raheel Sharif and he would definitely like to exploit the same.

There are a few factors that have given to Nawaz Sharif a ray of hope for getting rid of his bête noir. These are – the approaching date of superannuation of Gen. Raheel Sharif in November this year and the weakening of the latter’s position in view of the successful “surgical strikes” conducted by India which have considerably embarrassed the Pakistan Army.

A significant meeting attended by all four provincial chief ministers, the puppet chief minister of Gilgit-Baltistan, a host of cabinet ministers, senior government officials and generals of the Pakistan Army, mainly the Director General of Inter Services Intelligence (ISI) Lt. Gen. Rizwan Akhtar was held at the residence of Prime Minister Nawaz Sharif on October, 03.

During the meeting the government bluntly told those attending that militant elements would have to be controlled since the country was facing growing isolation internationally due to their antics. The information was, evidently, directed towards the ISI.

All eyes are now on the culmination of the drama played out during the fateful meeting whose proceedings have been leaked out to the media as reported by Cyril Almeida, a correspondent of the English newspaper, Dawn.

The army (Gen. Raheel Sharif) is quite upset with the manner in which this game has been played out. A statement has been released by the Army public relations department on behalf of the corps commanders expressing concern over the “feeding of “a false and fabricated story of an important security meeting. They view it as a “breach of national security.”

The government is making all the right noises about holding an inquiry to trace the source of the leak, but it does not seem to be very eager to do so. Cyril Almeida was put on the Exit Control List but, under the garb of international pressure, he has been struck off the list. This, by itself, is an indicator that the inquiry is likely to fizzle out sooner than later.

Gen. Raheel Sharif may now be feeling some heat but he has earlier played his cards well. A few months back he spread the word that he was not interested in continuing once his tenure gets over. Now, as the time is drawing near, he is throwing broad hints of certain vested interests creating a divide in the country and political conditions not being conducive. What he is implying in a crudely oblique form is that the time is not right for him to step down. He is looking to be cajoled into accepting some sort of an extension.

The two options for such an extension are his continuance in the present post for one more year or his elevation to the post of Field Marshal. The general, it would seem would prefer the first option since a Field Marshal he would become a ceremonial entity with real power being transferred to the new army chief.

The confidence being exuded by Gen. Raheel Sharif in this play out, despite the setback caused by the surgical strikes, comes from the overwhelming popularity that he enjoys due to his tough stand against domestic militancy and terrorism as exhibited by the “clean up” in federally administered tribal areas (FATA)

Under prevailing circumstances of a high profile international campaign being launched by India against Pakistan, many in the country feel that Raheel is the right man to come up with a counter. Prime Minister Sharif cannot ignore this sentiment altogether.

The support that the Chinese have extended to Pakistan during the recently held BRICS summit in Goa has opened a window of opportunity for the two Sharifs to thrash things out.

Media reports suggest that they met on October, 17, at the residence of the prime minister hours after the Chinese statement hit the media headlines. The outcome of the meeting could not be deciphered from the brief press statement that was released. Speculation, however, suggests that progress on an inquiry into the publication of a controversial story by an English-language daily came under discussion. Some even say that the possible successor to Gen. Raheel Sharif was also discussed.

For India the developing situation in Pakistan is not likely to make any extraordinary impact whichever way it may go. The least the Raheel Sharif will do before leaving (if he does leave)  is to ensure that somebody of his choice takes on his mantle and that somebody is simply going to carry on the legacy of “all authority with responsibility” and policy of maintaining a “low intensity state of conflict with India” as hitherto-fore.

India should, therefore, carry on with its newly established policy with respect to Pakistan. The most important is to remain vigilant for the inevitable riposte to the surgical strikes which will be attempted sooner than later.  Alongside, India should maintain pressure in isolating Pakistan internationally by exposing the inherent fault lines of the country which are essentially a product of the dual centres of power that operate over there.

(Dr. Simrit Kahlon is an academician and an analyst)