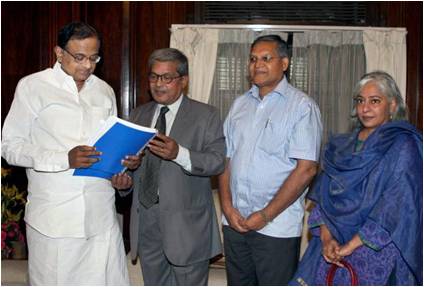 The interlocutors, in their report submitted to the Parliament regarding the turmoil ridden state of Jammu and Kashmir have been very emphatic in reporting a feeling of victimhood that, they feel, is rampant amongst the people residing in the Kashmir valley. Not surprisingly then, the main focus of their report has been on the enumeration of measures that may be taken to assuage this feeling of victimhood. They have, in fact, even gone so far as to suggest the inclusion not just of representatives from Pakistan occupied Kashmir but even Pakistan in discussions regarding the resolution of the Kashmir problem. They have justified this preposterous argument by claiming that all actors who are stakeholders in the Kashmir problem need to be brought on board.

The interlocutors see no problem in bringing on board established mischief mongers known to use every possible means to de-stabilise the situation in Kashmir. On the other hand, quite amazingly, they have conveniently ignored the need to include such actors like the Indian army who have a far more positive and significant role to play in the state.

Why this important segment has, very callously, been given short shrift is something that goes beyond logical comprehension.

The Indian Army has been functioning in Jammu and Kashmir since the 1947 when it quelled the first Pakistan sponsored attempt to forcibly occupy and annex the region. For two decades in the recent past, the valley of Kashmir was synonymous with total chaos manifest in the sprouting of terror outfits and organised hounding out of the minority community of Kashmiri Pandits. During this period, the Indian Army came to play and virtually dragged the valley back from the brink of an abyss. By so doing it saved the cultural rubric of the state which was slowly coming apart; it upheld the eroding secular ethos which was being replaced by radicalisation of society; it reinstated the earlier image of Kashmir as a tranquil paradise as against the raging inferno that it was being looked upon as.

It cannot be forgotten that, not too long ago, the peaceful Dal lake was in the grip of gun-toting mercenaries who became the representative logo of Kashmir in the minds of the general public. There was a collapse of the tourism and consequently the handicrafts industry. Year after year, the otherwise vibrant valley grew more and more silent; a dark kind of stillness fell like a death shroud all over, the stillness broken only by the sound of gun fire, a sound that pushed people even deeper into the gloom that they had descended into. There had been a complete breakdown of the civic administration. It was these debilitating circumstances that the army was called upon to restore. The result is there for all to see.

Today the democratic process in the valley has been restored with people coming out to vote in large numbers during recent elections. The tourist is back in the valley and business is once again booming. The education system is back in place and functioning better than before. There has been an infusion of infrastructure in the state. People feel secure enough to move out of their homes. Eventhe mainstream politicians who had scurried into their little cubby-holes at the height of terrorism are now back and feel safe enough to stridently voice their opinions. Unfortunately, some are using this freedom of speech and democratic liberty to target the very organisation which made it all possible.

While it is a matter of survival for politicians to create issues where none exist, surely, more was expected of the interlocutors who were sent to the state to prepare a rational treatise on the prevalent sentiment and situation in the state. What is most disappointing is that they too have reduced the entire state of Jammu and Kashmir to just the valley of Kashmir and seem to be viewing everything from the populist prism. The actors that they deem to be pertinent to the process of normalisation are the very

actors who are responsible for radicalisation of the traditionally secular ethos of the valley. These actors have consistently been working to derail the administrative and developmental processes within the state whose restoration has always been the primary concern of the army. Surely, the role of the army merits notice while taking account of any situation cialis canada in the state.

Coming back to the inclusion of Pakistan in the list of stakeholders; history bears witness to the fact that Pakistan has always worked overtime to create problems in Kashmir. This was attempted through the Tribal invasions of 1947 and 1965; the policy of bleeding India with a thousand cuts; the Kargil misadventure of 1999; the purchased political lobbies and dozens of other means. It is well known that the all powerful Pakistan army has always operated through deceit against India, more so in Kashmir. How then can it be expected that Pakistan would be interested in the return of peace and prosperity to the valley? Would it not be counter-productive for Pakistan to participate in peace talks on Kashmir while denying democratic rights to the people of Pakistan occupied Kashmir? How can Pakistan argue for freedom for one part of Kashmir while continuing to control the other?

It is surprising that the interlocutors did not pay heed to such critical issues while drafting their recommendations. They need to take a relook at their suggestions and make them cogent in the light of the mandate given to them and the faith reposed in them by the people of India and of the state of Jammu and Kashmir. The document needs to, honestly and boldly, seek out the ground reality and not pander to the needs of a few who do not have the interest of the region at heart and are simply there because they can talk the loudest.