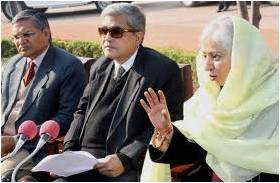 The panel of three interlocutors appointed by the government of India to engage the people of Jammu and Kashmir in a sustained dialogue so as to understand their problems and their aspirations and then chart a course for the future, is ready to submit an ‘initial document’ to the government. This document is expected to spell out the contours for a political settlement of the Kashmir issue. In effect this implies that the efforts and findings of the panel will be subject to scrutiny so as to establish whether they are following the right path in pursuance of their mandate or not. This will also assist in applying mid-course corrections where required.

The chosen trio that comprises of eminent journalist Dilip Padgaonkar, Information Commissioner M M Ansari and academician Professor Radha Kumar brought with them a wealth of knowledge and experience in the field of conflict resolution and the added advantage of having been earlier engaged in talks on Kashmir, in some form or the other. In the process of fulfilling their mandate, the panel has interacted with people from across a large cross-section of the State. Besides the valley of Kashmir, they have also interacted intensively with people from the Ladakh and Jammu regions. They have met with people of all communities, sects, religious beliefs and cultures that form a part of this diverse region.

The only group which the interlocutors could not engage in a dialogue is the Hurriyat Conference. Repeated attempts did not bear fruit as the separatists simply refused to relent. This posture is quite surprising since this very vocal political group was expected to grab the opportunity to put across its views. It seems that its decision of not meeting the interlocutors is based on some restrictions and limitations imposed upon it by ground realities. It is well known that the Hurriyat is a Pakistani stooge and it makes every move after due orders from across the border. The current situation in Pakistan is not very conducive to any grand posturing or strategy change. The changed perception of the international community towards India, especially Kashmir, has also made the Pakistani establishment sit up, take stock of the situation and reassess its options. The Pakistan’s army is in wait and watch mode and is not ready to up the ante at this point in time.

Since there is no clear message coming from Pakistan, the Hurriyat is getting into a face saving mode. It is questioning the credibility of the interlocutors by suggesting that this is not a decision making body. It is already a well established fact that despite its wide ranging mandate, the panel is not a decision making body. It is only expected to submit a set of recommendations on the basis of which the political process is expected to get underway. Hence, by taking recourse to such subjective and misleading statements the Hurriyat leadership is simply trying to skirt the issue so as to avoid saying anything concrete that would form a noose around its neck in the future.

Another reason for the hesitation in talking with the interlocutors is that the Hurriyat presently does not have anything new to offer. In fact, its political stand has been diluted since the protests orchestrated by it during last summer. The main stream parties and especially the State government have successfully high jacked its movement by not relenting from their just and righteous stand. At this stage, the call for freedom from India has no takers even in the Kashmir valley not to speak of the entire State of Jammu and Kashmir.

Notwithstanding the rigid and uncompromising stand of the Hurriyat, the panel of interlocutors has made some very significant inroads into understanding the complexities of the Kashmir imbroglio. The non political background of the members and the fact that they are eminent academicians has given them an advantage

So what essentially is the message that is emerging through the interlocutors’ interaction with the people of the State of Jammu and Kashmir? For one, it is clear that there exist a variety of voices that speak in a variety of tones and from a variety of standpoints. Certainly, not all of them are looking for “Azaadi” or even autonomy. Second, there are sections and regions of the state that resent the domination of the Kashmiri agenda over that of the entire state. Third, most areas have no sympathy with the separatist cause. Last but not the least, a major segment of the population is heavily dependent on the support offered by the Central Government at Delhi and the reassuring presence of the security forces who, apart from looking after their safety, also offer lucrative avenues for employment.

A somewhat similar viewpoint has also been echoed by the panel in its statement ““The political settlement has to be found only through a sustained and inclusive process of dialogue with all the stake holders and civil society organisations. The stake holders, therefore, need to move away from rigid positions and act in concert to focus tightly on issues of critical importance for the future”.

It can be safely presumed that the policy followed by the interlocutors to engage every community and shade of opinion, listen to them and given due cognisance to their opinion is poised to pay good dividends. Now we will have a clear picture as to who stands where and most probably the separatists will emerge as a small minority. It is also absolutely clear that the solution of Kashmir can be and should be worked out internally and allowing Pakistan to be a party in the internal political problem is a blunder for which the Kashmiri’s will pay a far greater price than the rest of the country. Lastly, once the last cog falls in place, it is for the leadership of the State and the Nation to stand up and be counted. They have to bear in mind that great problems are solved by great effort and hard decisions.