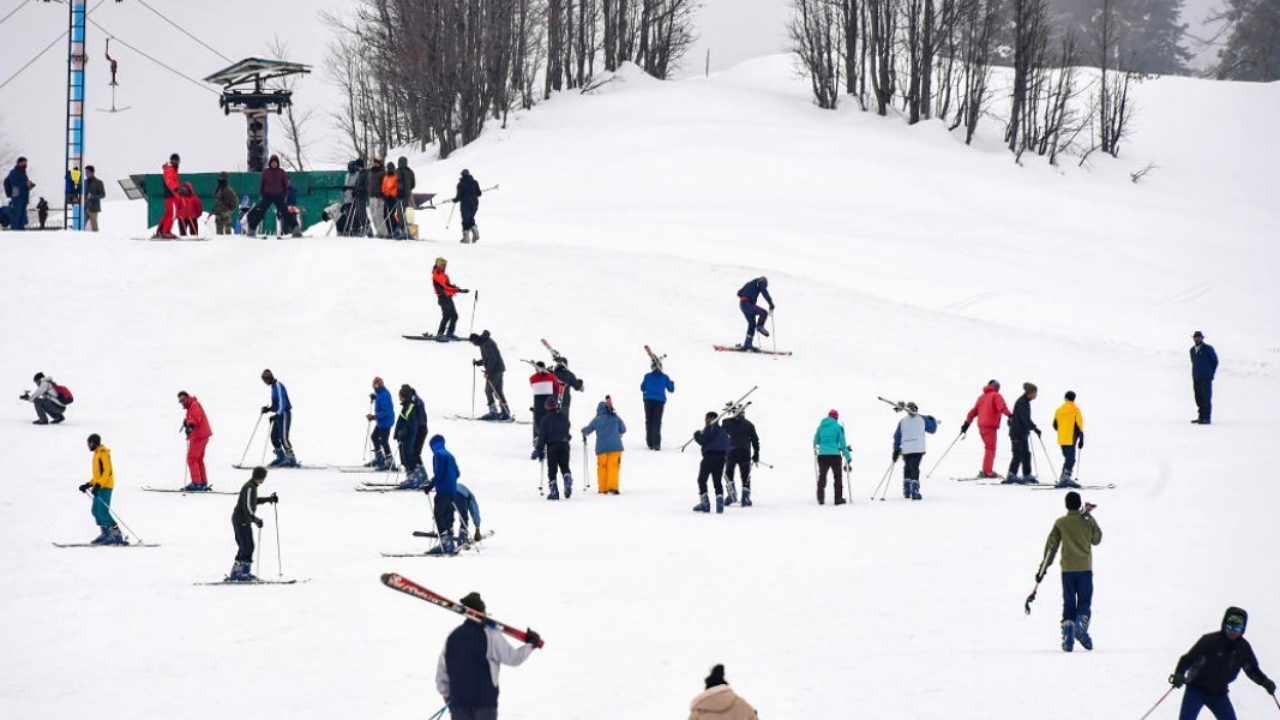 The Indian  Tri-colour will soon fly majestically on a “100 feet high flag post” in Gulmarg, the beautiful skiing destination of Kashmir. This project has been taken on jointly by the Indian Army and a private company, Solar Industries. It was inaugurated, with chanting of prayers by Hindu and Muslim priests, by the General Officer Commanding of the Dagger Division of the Indian Army as a part of the Gulmarg Winter Festival that commenced on 06, February. The festival too has been organised by the Indian Army in association with JK Tourism, JKTDC, JK Police, Gondola and Hotel Association of Gulmarg and the civil administration. Famous film personalities, Arbaaz Khan and Vidya Balan participated in the festival and have gone back spellbound by the beauty and glamour of Gulmarg. “I will definitely be coming back soon,” said Vidya Balan.

The foregoing, when seen in concert with the very successful conduct of the DDC polls and  containment of the cult of terrorism by the security forces, reflects a complete change in the environment of Kashmir. The people are experiencing a kind of peace and freedom that has not been seen since decades and they are enjoying every moment of the same.

The Indian Army has added to the celebratory atmosphere by organising a series of winter festivals. Before the Gulmarg extravaganza,  the army organised in end-December, a two day festival named ‘Jashn-e-Baramulla’. It included performances by participants of “Kashmir’s Got Talent” and various local artists.  Shopian too witnessed a grand musical festival at Batpura Sports Stadium that attracted a massive participation of more than 5000 people. A similar musical and cultural festival organised by local army units at Government College Handwara also witnessed massive participation.

The central theme of all the functions being held in Kashmir is Badalta (transforming) Kashmir. The objective is to energise the youth by highlighting the culture and tradition of Kashmir and instil in them confidence to take advantage of the facilities being provided to build their future. The platform is being used by senior Army officers to motivate youth in this direction.

Festivals is but a small, fun filled segment of the many actions and activities that the Indian Army undertakes to ensure that the people of Kashmir go through the harsh Kashmiri winters with less problems. For many decades now it has been a tradition for the Indian Army to prepare well for providing medical assistance to the locals during the months of peak winter. The work starts early with the conduct of extensive medical camps in which health check-ups are conducted and general awareness of the precaution to be taken is created. The work then carries on through the winter by provision of free medical treatment by Army Doctors and even free medicines to the people, especially those living in remote  areas. These actions are undertaken under the Army’s flagship welfare initiative, Operation Sadbhavna.

The Army also remains ever ready to carry out evacuation of civilians of remote areas in cases of medical emergencies, especially those involving pregnant women. On many occasions Army personnel have joined the men folk of villages to carry such patients on army stretchers to the nearest roads from where army ambulances take them to hospitals. Evacuation by Army helicopters has also provisioned when required.

The Army remains ever ready for Avalanche rescue, floods  and other such natural disasters that take place often in the valley during winters. Sometimes the region gets cut off for many weeks at stretch due to hostile weather conditions; the army is always ready to cover shortfalls.  The list of assistance provided by the army is very long indeed.

The people of the Jammu and Kashmir have, along with the Army, faced great challenges to neutralise a diabolic foreign design of wresting the region from the Indian Union through the medium of a low cost Proxy war and cross-border terrorism. The mainstay of this epic fight has been mutual trust and an enduring bond under the most difficult circumstances. The people maintain an unremitting faith in the soldiers, despite very sophisticated psychological warfare by the enemy to create a rift between them and the Army. The Army, on its part, remains steadfast in providing a secure and meaningful environment. Thankfully, the people and the forces are standing on the threshold of success with terrorism at an all time low and the bond stronger than ever.

So far as internal security is concerned, incisive counter-terrorist operations by the security forces based on real time intelligence provided by the locals led to the neutralising of 225 terrorists in the preceding year (2020). The numbers include the entire top leadership of the various terrorist Tanzeems that are now left headless. The forces lost about 60 of their brave soldiers in these operations. Significantly, more than 600 Over Ground Workers (OGWs) have been identified and many have been interned by the Police, this implies that the administrative machinery of the terrorists has also been nullified.

Despite the great improvement in the environment there is no space for complacency. It is so because Pakistan is not relenting from its evil designs and is determined to increase the threshold of violence and terrorism by infiltration of more terrorists and weapons and by recruitment of local cadre. This is evident from the fact that last year witnessed a record 5,133 incidents of ceasefire violations in which 46 security force personnel were killed. These violations are primarily to facilitate infiltration of terrorists. The Indian response to such misadventures was massive and destructive but the enemy refuses to learn any lesson and mend his ways. Even the overwhelming  spread of Coronavirus in the country, and more so in Pakistan Army, has not deterred the force from its evil machinations.

The Indian Army serves as a harbinger of peace and freedom in Kashmir with its noble work and concern for the common Kashmiri. The attachment between the army and the people, as has been seen through their close bonding through the winter season, will not allow the enemy to succeed.

(Jaibans Singh is a reputed analyst, columnist and commentator)