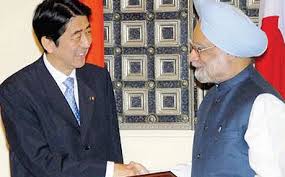 India, China and Japan, the three most powerful countries of the South and East Asian region are making a conscious effort to redefine their relationships in concert with the evolving dynamics. Old perceptions are giving way to new in a manner that has brought about far reaching changes in their traditional bilateral and trilateral postures.

China, as is well known, has recently gone through a leadership change, the new set up will be in charge for a decade long period. Even though change of leadership in China does not lead to drastic policy overhauls, it does herald a different approach. It cannot be forgotten that this leadership is expected to preside over the Chinese tryst for world domination.

In the post world war scenario, China and Japan did exhibit a thaw in their traditionally acrimonious relationship. Japan reached out to China with massive overseas development assistance (ODA) and tried to build a healthy economic relationship; it has now realized that traditional acrimonies never really leave the national psyche. The rift between the two countries resurfaced with some potent anti-Japan protests in China in 2005. The matter has aggravated due to the Senkaku Islands, presently under Japanese control but claimed by China. China has, in recent times, intruded in the air and maritime space of the islands on a number of occasions much to Japan’s consternation. The last such “incursion” happened only a few weeks back on May, 17, when Chinese ships entered the waters of the disputed islands.

China has put the border dispute on hold and built a vibrant economic relationship with India. India is keen to keep relations with China on an even keel but Chinese transgressions are a major road block in the buildup of trust. Unprovoked Chinese incursions along the line of actual control, more than due assistance to South Asian countries neighbouring India, illegal presence in Pakistan held Indian territories like Gilgit-Baltistan and POK, massive build-up of military might are some of the reasons that make India uncomfortable. On the other hand, India’s attempts to match up militarily with China, however feeble, raise the hackles of the dragon immediately. To sum it up, there is mature attempt to keep the relationship on an even keel but persistent problems come in the way. This legacy has been handed over to the new Chinese leadership.

India and Japan, despite being democracies, had a “not so warm” relationship mainly because of the Indian tilt towards the erstwhile Soviet Union and Japans alignment with the US. It was this diplomatic configuration that came in the way of Japan becoming a partner in the Indian growth story. It is well known that Japan under Prime Minister Shinzo Abe is poised to become militarily active. Japan has been looking around desperately for a counter weight to China and has realised that India is the most apt choice. It has, therefore, shown an unusual degree of eagerness to make up for lost time and has been making many overtures.

It is against this backdrop that the recent high level visits and diplomatic movements in the region need to be seen. Chinese Premier Li Keqiang smiled his way through his visit to India. He insisted that India being his first port of call after taking on the mantle of premiership indicates the priority that China would wish to give to the country. The visit was, however, marred by the Ladakh incursion. A close look would suggest that it did not reap the kind of benefits that it should have.

The fact that Li Keqiang chose to go to Pakistan immediately after his Indian sojourn made it seem like he wished to placate India before going to a country more significant in his scheme of things. It is quite apparent that the new Chinese leadership has no intention of changing the traditional policy towards Pakistan. In fact, Li has promised to Pakistan enhanced strategic support and more importantly, nuclear power.

This has been followed by a visit to China by the Sri Lankan President, Mahinda Rajapaksha. It is well known that India and many other countries of the world have issues with Sri Lanka with regard to the human rights violations being heaped on the Tamil population after the defeat of LTTE. Despite such global sensitivities China has, during this visit, opened the floodgates of aid to the country. This includes an international airport, a strategic port, communication satellites, road and railway links etc. Clearly, China is spreading its foot print in the Island nation despite grave concerns expressed by India.

The visit to Japan by Prime Minister Manmohan Singh has given a concerted fillip to the strategic relationship between the two countries. Prime Minister Manmohan Singh said unambiguously that Indo-Japanese ties are now based on an economic as well as strategic foundation with a common approach to security. This will translate into joint ventures in weapon production and sharing of defence technology which India urgently requires to give a boost to its indigenous defence production capability. The process has already started with Japan offering its US-2amphibian aircraft to India.

This development on the Indo-Japanese front has had as profound an effect on China as Chinese postures in South Asia had on India. Predictably the state owned Chinese media has reacted sharply. “Overheated strategic cooperation with the Abe administration can only bring trouble to India and threaten its relationships with the relevant East Asian countries,” said the Chinese communist party run Global Times.

It is quite evident that the evolving situation will require deft handling by all countries. India will need to maintain necessary balance in its relationship with both countries. India also needs to see how it can react to the pivot the US is planning to develop in East Asia. All eyes are now on India to see how this ancient nation steers the South-East Asian region towards peace and security