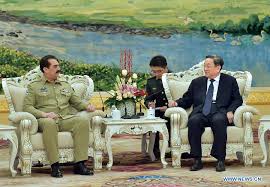 Some significant developments that have recently taken place are critical for the geo-political equations in the Indian Sub-continent. They define the complex relationship between the three most important neighbours – India, Pakistan and China.

The first is the refusal of the US government to provide F-16 aircraft to Pakistan free of cost even while offering to give the same on payment. Pakistan, of course, does not have the money to go for the purchase option.

The second is China’s blocking of New Delhi’s efforts to get Maulana Masood Azar, the leader of the Pakistan based terrorist organization Jaish-e-Mohammad designated a terrorist. Masood Azar is wanted by India for the recent attack on its Air Force base at the border town of Pathankot.

The third is China’s opposition to India joining the elite nuclear suppliers group.

The fourth and most important is the inking of the Chabahar Port project by Prime Minister Narendra Modi during his recent visit to Iran and that too in the presence of the President of Afghanistan, Ashraf Ghani.

The events have also been marked by a hurried and almost impromptu visit to China by the Pakistan Army Chief, General Raheel Sharif, on May, 15, where he is said to have met the Chinese political and military leadership including, as some reports suggest, President Xi Jinping.

It is quite evident that Pakistan is rattled by the distancing of both the US and Saudi Arabia, two countries that have been providing life supporting oxygen to it for the last many decades. Their disenchantment is the result of the flawed and immoral policies that are being followed by the political and military leadership of the country for quite some time.

The recent accretion in  India’s second strike nuclear capability by the successful testing of interceptor missiles and the speed with which the Modi government is pursuing its arms acquisition and indigenous arms production policy have added to the desperation being felt by Pakistan.

The visit of General Raheel Sharif is a clear indication of the insecurity that Pakistan is presently feeling and the extent to which it is ready to go in order to stay keep China on its side. In the face of an existential crisis, Pakistan can now rely only China for support. It has the need, now more than ever, to invoke the “all weather ally” syndrome with China.

General Raheel Sharif, during his recent visit, made a special effort to press home the point that “the security of the China Pakistan Economic Corridor was the unshirkable responsibility of the two militaries.”

Quite noticeably his intention was to sideline the role of the Government of Pakistan in favour of the overriding importance of the Pakistan Army. The matter was further pressed home through a tweet by the chief of the Pakistan Army Public Relations Department ISPR) on culmination of the visit which said, “The visit was very intense, highly formal visit, strategic relationship manifested in talks and interactions.”

China is, on its part, is worried about the China Pakistan Economic Corridor (CPEC) which is a key to its economic dominance in the region. The project has become even more critical for China in view of the progress made by India on the Chabhar project which will open trade routes for India, Iran, Afghanistan and the most important Central Asian Republics. CPEC is likely to get dwarfed by Chabahar; its failure will court economic disaster for China.

It is for this reason that China is playing along with Pakistan and more so the Pakistan Army.  Its policy is to play upon the obsession of the Pakistan Army with its Indian counterpart by making moves like blocking of the terror tag to Masood Azar and the nuclear supplies group fiasco. By so doing it exercises control over the country.

With India, China is very careful to maintain a structured relationship. Since continuance of trade with India is of great importance given the fragile nature of the falling chinese economy, it engages at the political level with visits and return visits.

India on her part, has shown a desire to maintain a positive relationship with China despite the pin-pricks but not at the cost of her geo-strategic interests. While engaging China in all manner possible she has maintained her equation with important countries like US and Japan especially where Asia –Pacific and the South China Sea are concerned.

India sent a formidable fleet of two stealth frigates, one tanker and one Kirch class corvette for the latest Exercise Malabar, a long standing annual trilateral naval defense initiative involving US, Japan and India. China remains concerned but has been taking such initiatives by a proactive India in its stride since it has no other option.

While maintaining relations with China on an even keel India should strongly protest the use of Gilgit-Baltistan for the CPEC. Gilgit-Baltistan being a territory under dispute between India and Pakistan cannot be used as a virtual colony by a third country. This apart, the alignment of the Karakoram Highway has a military implication for India in the event of a conventional war with Pakistan since it would afford rapid movement of troops and storage facilities for arms and ammunition.

Pakistan, on its part, should realise that China looks at it only as a vassal state, essential to maintain the balance of power in the Indian Sub-continent and the larger Asia-Pacific region. In other words, China’s interest in Pakistan is limited to containing India and also getting access to the Indian Ocean through the Gawadar Port. Till now Pakistan is giving nothing but assurances of securing the CPEC corridor for China, only time will tell whether it will be able to stand by these assurances or not. In case Pakistan is not able to provide necessary security to Chinese operations in the CPEC initiative it will get unceremoniously dumped and then it will have nowhere left to go.