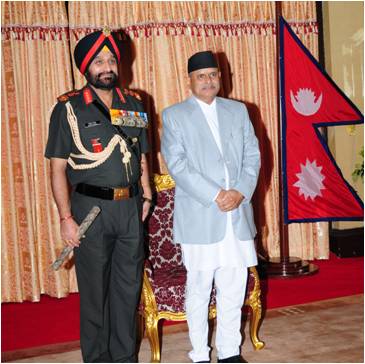 The army chief, General Bikram Singh, has recently culminated an official visit to Nepal, a neighbouring country which has significant social and security relations with India. Seemingly, the visit was of a routine nature to conduct a long standing reciprocal military convention of conferring upon the new chief the rank of honorary General of the Nepal Army. The Nepal army chief, General Chhatra Man Singh Gurung, already holds the honorary rank of General of the Indian Army.

However, the timing of the invitation from Nepal (within a month of General Bikram Singh taking over) indicates a major initiative in military diplomacy between the two nations. This aspect was emphasised by General Bikram Singh himself, “this signifies that Nepal is very special to all of us,” he said to the Nepalese media while responding to a query on this being his first foreign trip after taking over. The visit has also been described as one of high importance for India owing to its relationship with Nepal and close traditional links between the armies of the two countries.

Nepal is a land-locked country situated between India in the east, west and south and China in the north. The country’s strategic importance is derived from its status as a buffer between the two Asian super powers. Earlier, China elicited very little interest in Nepal but since the annexation of Tibet it has focussed its eyes and energies on the country. It aims at placing itself in a dominant strategic position in the eventuality of a confrontation with India. China has already built a 770-kilometre railway line connecting Lhasa, the Tibetan capital, with the border town of Khasa in Nepal. Nepal has requested the link to be extended to Kathmandu. When China completes the ambitious project, it would significantly improve its strategic access to India’s borders.

For a long period of time in the post independence era, India showed a proclivity to play the role of a big brother, which was resented by Nepal; this, in addition to the political upheaval that Nepal has been going through since the 1990’s, caused considerable friction in the traditional good relations between the two countries. The fact that the deposed Nepalese King Gyanendra and the maoists under Prachanda harboured distinct anti-India feelings did not help matters. India’s opposition to the maoists joining the Nepal army also caused bad blood.

The multi-party democracy that was to come in post in place of the monarchy has not been able to find its roots. The maoists are finding it difficult to resolve the inherent contradiction between their ideology and the basic requirements of democratic governance. As a result, Nepal has not been able to draft its constitution and has seen frequent changes in Prime Ministers. This situation suits China which is trying to ingress the country but is detrimental to India whose traditionally strong relationship is witnessing a down turn due to the instability. It is for this reason that, of late, Nepal is being viewed as a soft belly of India’s strategic security.

India has been making some very serious attempts to give more aid and assistance to Nepal in view its own security interests. A significant leverage has come by with Baburam Bhattarai becoming Prime Minister of Nepal. Bhattarai has studied in India at Delhi and Chandigarh and has a pro-India approach. India went a step further by appointing Jayant Prasad as the country’s Ambassador to Nepal. His predecessor had not exactly endeared himself to the Nepalese government with his rude and over bearing manner. In 2010, India extended to Nepal a line of credit worth $ 250 million and 80,000 tonnes of food grains. India also agreed to set up a credit line to ensure uninterrupted supplies of petroleum products and other commodities..

This is also a critical period insofar that the Nepalese government is to take a decision on allowing Nepalese Gorkha’s to serve in the Indian Army as hitherto fore. The maoists have raised an objection to this precedent despite the fact that the 22,000 Nepal Gorkha’s serving in the Indian army and the ex-serviceman collectively generate an annual revenue of $ 200 million which is a great boost to the economy apart from maintaining good relations between the two countries.

The visit if the army chief gains importance when seen in the context of the improving relations with Nepal. General Bikram Singh held extensive talks, not only with his counterpart but also with Prime Minister Bhattarai and Defence Minister Bijay Kumar Gachhadar. The idea was to work out mutually beneficial defence cooperation. The agenda was to enhance cooperation in training and courses, UN peacekeeping, disaster management, sports, adventure activities and defence industry. Very high in priority was resumption of arms supplies which has remained suspended since the royal takeover in 2005. Other issues of importance that may have come up for discussion are the supporting vectors of cross border terrorism such as flow of fake Indian currency notes through Nepal, Extradition Treaty and the Mutual Legal Assistance Treaty. Nepal has given a firm commitment that it will not allow its soil to be used against the security interests India.

“Yes, given the policies of both the governments we are moving ahead and it is making progress,” said General Bikram Singh, post his meeting with the Nepalese premier, indicating the positive outcome of the visit.

Relations between India and Nepal have always remained complex; they have their fair share of ups and downs, this being the “up” period. Traditional linkages of the two armies have been important tools towards cementing this friendship. The chief’s visit to Nepal is bound to further the effort to engage Nepal positively; it will help build trust and mutual confidence. It is also heartening to see the army being incorporated in diplomacy.