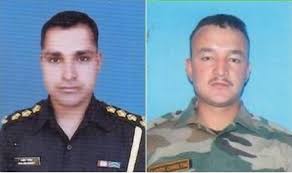 The War Memorial at Headquarters, Northern Command in Udhampur will be inscribed with the name of two more brave Indian soldiers, who died a hero’s death in the cause of the nation, while fighting foreign sponsored terrorism in the Kashmir region of the state of Jammu and Kashmir.

The fallen brave heart, Major Kamlesh Pandey hailed from Almora, Uttarakhand; he had joined the Army in 2012 and was the proud father of a two year old daughter. The second brave heart, Sepoy Tanzin Chulltim, hailed from Lahaul Spiti, a remote area in Himachal Pradesh. Reports suggest that Major Kamlesh Pandey of 62 RR took five bullets and succumbed to his injuries while being evacuated to the Military Hospital.

The two soldiers’ embraced death in a small place called Shopian in Kashmir whose only claim to fame is hidden terrorists, open secessionism and paid disruptive activities like stone pelting. Does a place like Shopian deserve the blood of brave and honourable soldiers like Major Kamlesh Pandey and Sepoy Tanzin Chulltim?

While logic says no, it is also undeniable that a sacrifice of blood is necessary for the sake of the countless innocent citizens of our great country it who are being terrorised and manipulated by a few at the behest of an enemy of the nation.

It becomes necessary here to get an insight into the kind of animals in the garb of humans that the Indian Army and other security forces are out to eliminate in the Kashmir Valley.

A few days earlier, a terrorist with a grandiose name of Abu Dojana and his accomplice were hunted down like dogs at Harkipora village in Pulwama district, a place not very far from Shopian.

Abu Dojana was a Pakistani terrorist who attempted to pass of as a Jihadist Mujahedeen. He was trained in Pakistan by the Lashkar-e-Toiba (LeT) and infiltrated into Jammu and Kashmir a few years earlier.

Once in Kashmir he got drunk on the power that the AK-47 gave to him, threw the ideology of Jihad to the winds and concentrated on leading a good life which primarily included fulfilling of his carnal desires. He was indiscriminate in forcing himself on the local girls. On being faced with resistance for his licentious, immoral and shameless activities, he forced a young girl Rukayyah Dar, daughter of a small farmer from Harkipora, into marriage and proceeded to use her like a sex slave as decreed by the Islamic State (IS) ideology.

Being quite smitten by her, he made frequent trips to her house and met his ignominious end during one of the trips. He was so busy pursuing his pleasure that he did not even get to know when security forces laid out a cordon in the early hours of the morning. The operation, once underway, lasted only two hours, which does not speak very highly of his fighting ability.

It is notable here that the operation was set up on the basis of credible information provided by local sources who were, undoubtedly, fed up of the late night dalliances of Abu Dojana. It goes without saying that Rukayyah Dar and her family would have been most relieved by the death of the so-called “Jihadi.”

The new set of terrorists do not subscribe to any particular ideology, they are quite comfortable in shifting from the demand for Azaadi  (Freedom) to implementation of Shariat in the IS mould. This is quite apparent from the case of Abu Dojana who shifted from the LeT to Hizbul Mujahedeen (HM) and was ready to further join the new establishment Ghazwa’tul-Hind floated by Zakir Musa. It is notable that Zakir Musa has also shed the concept of Azaadi to root for the more fundamentalist IS.

The thrust, therefore, is more on the self rather than pursuance of any ideology.  It is quite apparent that terrorism in the Kashmir Valley is now being driven by opportunism and not pursuance of any substantial belief or principle.

It is also very sad to note that the new age terrorists are, in a most immoral manner, forcing themselves on to the local girls. Foreign terrorists like Abu Dojana are particularly prone to doing so.

It is heartening to note that common people of Kashmir are ready to take great personal risk to expose such wicked and depraved criminals and assist the security forces in neutralising them.

Beyond this, the people of Kashmir also need to expose all such divisive forces that provide support and sustenance to people like Abu Dojana and Zakir Musa so that the cult of terrorism can be finished once and for all.

It is very unforthnate that a young Kashmir boy lost his life in the protests engineered after the death of Abu Dojana. It amounts to a life being lost for no purpose at all. The people need to ensure that divisive forces do not interfere with the counter-terrorist operations and the engineered disruption in the aftermath of a successful operation is not allowed at all.

The speed with which the terrorists operating in Kashmir are falling is an indicator of the determination of security forces to rid the area of the menace of terrorism for all times to come. Security forces, however, need to ensure minimum casualties to their own personnel while conducting counter-terrorist operations. It is very depressing for the nation to see coffins coming from the valley. The terrorist scumbags are definitely not worth the life of an Indian soldier or any other citizen of India.

The determination being shown by the security forces and the results being achieved gives some solace that the sacrifices of brave hearts like Major Kamlesh Pandey and Sepoy Tanzin Chulltim will not go in vain.

(Jaibans Singh is a reputed security analyst and columnist)