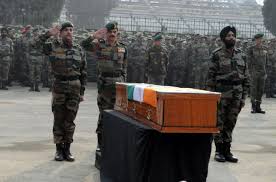 The euphoria caused by a large voter turnout for the assembly elections in Jammu and Kashmir has been responded to by the terrorists with a spate of attacks across the state in the last week or so.  The suicide attack in Arnia , district Jammu on November, 27, followed by the second suicide attack at Uri  in  Kashmir  on December, 05; the infiltration bid in Kupwara, Kashmir on December, 2 and various other skirmishes have left brave Indian soldiers and policemen killed and many wounded. Of course, a larger number of evil terrorist have also been eliminated.

The whole of India is mourning the death of the soldiers and policemen, brave sons of the nation, in this mindless violence. They have made the supreme sacrifice for the cause of the Nation in Jammu and Kashmir.

Most of the Indian soldiers and officers come from middle class to poor families and are the sole bread winners of their families. Apart from their wives and children they also look after their old parents and in many cases their younger brothers and sisters as well.  Imagine the trauma that is caused by their sudden and untimely demise, dreams broken, old age of parents destroyed, children left without support. It is heart rending to think about the devastated families whose loss is irreparable

Apart from hurting the Indian people the evil terror mongers in Pakistan are causing a criminal ruin of the youth of their own country also. They are indoctrinating young, impressionable and mostly illiterate boys from poor families with false propaganda and sending them to a sure death simply to fructify their wicked agendas. The Hafiz Saeed’s, Maulana Azghar’s and Syed Sallahuddin’s who sow this harvest of hate are leading secure and luxurious lives with their families while misled young boys are being eliminated. These serpents know full well that nothing can be achieved from this destruction but they still go on because they thrive on such criminal and vicious activity.

A considerable boost for such nefarious designs is given by those in Kashmir who are associated with the Pakistan based terror mongers. They give calls for elections boycotts and engineer other disruptive activities like strikes and lockouts at the behest of their masters in Pakistan. Videos of such hate filled statements, stone pelting and lockouts are shown to the terror recruits in the indoctrination phase to prove that Muslims are suffering in Kashmir. They are fed with false information that Muslims in India are being suppressed and are calling for liberation through Jihad. They are given promises of the best of women, wine and wealth in India and a direct ticket to heaven after death. Little do they know that a majority would lose their lives while trying to cross over; those lucky enough to get across would get a few more hours to live before joining their partners in the journey to hell. They do not even come to know that information of their whereabouts is given to the security forces by the very people whom they have come in to liberate and who actually hate them for the mindless destruction that they end up causing.

Another notable point is the manner in which the points for terror strikes have been selected. It is well know that the Kashmir valley is divided into North, South and Central regions.  Terrorist have struck in all three regions – North (Baramulla), Central (Soura) and South (Pulwama) and also in Jammu.

The terror masters have attempted to send two clear messages. One, they can strike at a time of their choosing. Two, they can strike at a place of their choosing in Jammu and Kashmir. The game plan has also been coordinated with Prime Minster Narendra Modi’s rally at the Sher-e-Kashmir stadium in Srinagar on December, 8, which indicates that their political strategy goes beyond the elections.

Notwithstanding the unfortunate losses suffered by the security forces, the terrorist plan has fallen short of to what they wanted to achieve. The losses suffered by them amount to a humiliating defeat. All terrorists involved in the recent attacks have been killed. A large number had been eliminated earlier in well planned counter terrorist operations launched by the security forces. The terror incidents are not likely to break the will of the people and voting in the coming phases will see an increase rather than a decrease in voter turnout.

The bottom line is that the Kashmiri people have moved on from the situation of the 1980’s and 1990’s. They are fed up of the violence and they look forward to a secure life and good jobs for their younger generations. Security forces are dominating the security environment with active support of the people. Terrorists are now unable to make an impact in the state. Regrettably, there are some in Kashmir who are unable to read the writing on the wall and are not ready to move with the times. The fact is that terrorism has no future in the state and terrorists are desperately clutching at straws. One can only hope that good sense will prevail sooner than later.